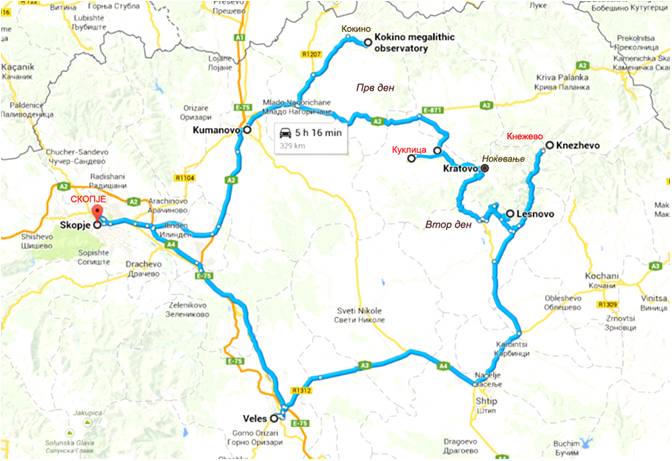 HAEMUS is one of the official partners in the ‘Study for mapping of tourist routes in Northeastern region‘ commissioned by North-Eastern Planning region – Macedonia.

After Bislim canyon project, this was the second big project by HAEMUS in the Northeast region of the Republic of Macedonia, concentrated mostly within Kratovo municipality. The Kratovo region lies in the most eastern part of the Northeastern Macedonia. It is located within Kratovo-Zletovo paleovolcanic area which is the source for non-metal and metal raw materials including many operational mines, and it was settled from prehistory up until late middle ages by many cultures. The study for mapping of tourist routes in Kratovo region was a long-term process, as it is known that this region is rich in mountains, lakes, volcanic bombs, rock sanctuaries, archaeological site, and Byzantine churches.

For this purpose special methodology was created. This methodology, based on natural and cultural heritage again, consists of criteria for selection of travel content, products, and tourist routes. A couple of criteria were selected and defined. Here you can see some of the criteria we used to define, select and organize main tourist products, as well as the itineraries and routs. The creation of tourist routes is determined by topic, duration, type, method of travel (visit) and spatial elements (regional, national …). Some of the routes that were created will be used by the agencies, tourist guides, or they will be included as general information for the tourist sector.

An attempt was made to create a significant number of tourist products, for the benefit of the tourists, as well as the local community, by generating economic development. In conclusion, we would like to point out that the most important feature in promoting natural and cultural resources is the creation of a thematic unit; i.e. identifying similar items at the same locations which can be used to create a single product. Thus, the main goal of any tourist product based on heritage is to make itself recognizable in local, regional, but also international frames.

Regarding the plethora of cultural heritage in the Northeast region of Macedonia, the next stage in this project will include development, maintenance and upgrading of tourist routes, as well as managing the human resources dealing with tourism and heritage in general.