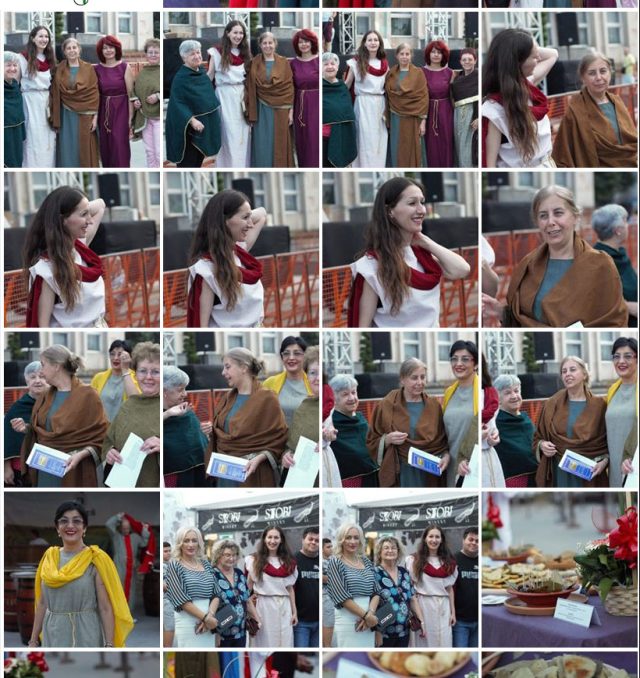 On September 8, 2017, starting at 17:00 on the city square in Kavadarci, within the program SCUPINI ROMANI HAEMUS organized the performance “Vinalia Rustica”, an ancient Roman holiday dedicated to the grape harvest as the beginning of the program dedicated to the manifestation ,,Tikveski grozdober”, grape carnival in city of Kavadarci. The main aim of the event was wider promotion and popularization of the cultural heritage of the Roman period, as well as the contemporary Macedonian folk holidays, beliefs and customs.

Within the performance the following items were included:

– an educational part for the Roman Wines – tasting of muslum (ancient Roman wine with honey and spices)
– tasting of Roman food
– reciting poetry from the ancient Roman poets in cooperation with the poetry association “Tikvesh Flowers”
– projection of the documentary “Stobi” produced by New Moment, Skopje
– lecture by Aleksandar Madzovski (HAEMUS, Skopje) on the topic “Vinalia Rustica – an ancient Roman holiday of the grape harvest” – a bazaar of handicrafts with inspiration from the cultural heritage of the Roman period
– lottery with souvenirs from SCUPINI ROMANI

Roman chanting of Fasti Vinalia of the poet Ovidius was performed by the actor Aleksandar Malinkov.
The event was done under the motto of the UNESCO Open Educational Resources.

Vinalia Rustica was performed under the sponsorship of Kavadarci municipality.