The joint effort of the Ministry of Culture, Youth and Sports of Kosovo and the Kosovo Institute of Archaeology resulted with a guide through the archaeological sites of Kosovo. This is very important, regarding the rich cultural heritage which was completely blocked due to the many years of war. A prefatory note to this publication was written by Memli Krasniqi, currently the Minister of Culture of Kosovo.

The guide that you already have in your hands marks a very significant step towards documentation and presentation of our archaeological heritage. This guide is a short summary, but very important one that aims to offer explanations for some tens of archaeological sites, from 400 of them identified in total in the territory of Kosovo until now, and registered in the List of Cultural Heritage for Temporary Protection of Republic of Kosovo. As such, the guide will serve as an informant for chosen locations and maybe the most important ones documented in Kosovo. This guide is dedicated to all group ages that are curious to know about abundant archaeological heritage of our country. The guide is prepared in a chronological order starting from prehistory until the medieval period. 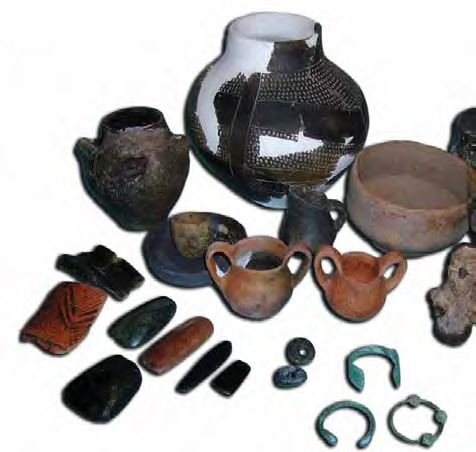 The Archaeological heritage of Kosovo, recorded until today, presents a very valuable treasure of our country. The archaeological potential identified during the second part of the last century has been documented through variety of archaeological research. These have been carried out during the last decade in the form of trial trenches, field surveys, systematic excavation as well as geophysical, archeo-botanical and archeo-metallurgical studies.

This interrelated scientific archaeological research presents an acknowledgement, analysis and presentation of the rich archaeological heritage of Kosovo. This archaeological testimony reflects the traces, remains, ruins and artifacts of past civilization, of the autochthonous population as well as eastern and western civilizations, documented in a determined space and time.

Due to several decades of research of local archaeologist  especially in the last decade, through cooperation with archaeologist from Albania, France and particularly with the arrival of specialist from the fields of interdisciplinary archaeology  our colleagues from Germany, Kosovo now can present an extraordinary abundant, diverse archaeological heritage, in and out of the country. Ministry of Culture, Youth and Sports will continue to support expeditions with reconnaissance, investigative character, and archaeological studies and in particular publications through which cultural archaeological heritage of Kosovo will be presented and promoted.