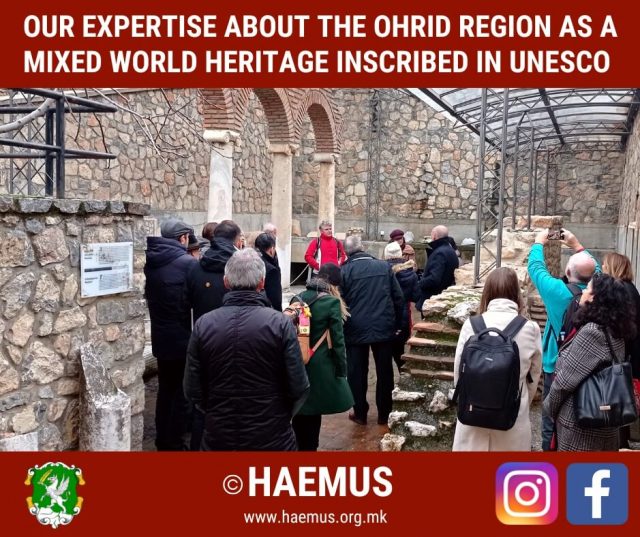 On January 17, 2023, Ms. Vasilka Dimitrovska, the HAEMUS director was invited by the EU Delegation in Skopje to join Ambassador David Geer and the other 17 ambassadors of the EU member states in Macedonia for a one-day visit to Ohrid. The main focus of this visit was the preservation of the natural and cultural heritage of the Ohrid region inscribed in UNESCO, along with the promotion of tourism, innovation and economic opportunities in the region.

To make a small retrospective, on 29 January 2020, at the invitation of the Government of the Republic of Macedonia, two HAEMUS representatives were present on the last meeting that UNESCO commission held in Macedonia as a part of the field inspection about the status of the Ohrid region, inscribed on the World Heritage List as a mixed heritage. On this meeting organized within the Municipality of Ohrid headquarter, representatives of governmental and non-government organizations were present, as well as representatives from the local community, especially people who live in the historical district of the city of Ohrid. It seems that UNESCO experts located the main weaknesses which were included in the final report about the region. Together with the final report, they proposed the status of Ohrid region to be replaced from WHS to “world heritage in danger”.

One of the recommendations of UNESCO regarding the cultural, environmental and natural heritage is to establish a Center for management of the Ohrid region, which would be a pivot with authority to coordinate and manage the protection process of the region. This center should be an independent body, rather than a political administrative entity, and it is needed for a successful communication and networking between various governmental and non-governmental sectors and the local community (this coordination and communication is necessary within N. Macedonia itself, as well as with the relevant institutions and instances in Albania). According to the UNESCO report, a serious lack of fast, effective and coordinated communication between these entities was detected. With this Center, attention will also be paid to the intangible heritage. At the time when the Ohrid region was inscribed on WHL, the intangible heritage was part of the cultural heritage in general. With the UNESCO Convention in 2003, the intangible heritage became a separate category. A significant part of the HAEMUS activities also falls in this category, having in mind that we are legally safeguarding the Martinki Custom, which was inscribed as a WH on the Representative List of UNESCO in 2017, hence our close cooperation with several sectors of UNESCO.

The day started with a visit to the info center of National Park “Galichica” and short informative lectures from the employees about their projects. Then it continued with the meeting with the mayor Kiril Pecakov – Mayor of the Municipality of Ohrid, where the priorities of the Municipality of Ohrid and the innovative project Kasarna HUB funded by the EU were discussed. The visit of Ohrid was concluded with valuable discussions with representatives of other civil associations. At the end, there was a short visit to several locations in the historical district of Ohrid, where concrete examples were used to explain the situation with archaeological excavations, conservation and protection, and of course the promotion of the cultural heritage placed under the protection of UNESCO, where it seems that a large number of state institutions have failed under the political pressure and instead of protecting those sites, they have participated in their degradation.

We share the opinion of the UNESCO decision that the Ohrid region should change its status and to be inscribed in the “World heritage in danger” list, because this way through different types of mechanisms we can obtain a direct assistance from UNESCO, both financially and in human resources, which will help to successfully overcome this intermediate phase and to bring back the region on the WHL again.

Here we also see the role of HAEMUS as an organization seriously involved in the heritage management processes, which could make a significant contribution in terms of mediation, management, capacity building (both for professionals and ordinary local citizens), promotion and popularization of the region.

Ms. Dimitrovska came to the meeting in Ohrid on 18.01.2023 as a representative of HAEMUS, but also as a representative of Interpret Europe, the largest European association for heritage interpretation based in Germany. In the last few years, she has been one of the thematic coordinators of the association and the case of the Ohrid region has been discussed several times within the meeting comities. In that regard, we would suggest a model of education through heritage interpretation, in which we have long-term experience and we think that we can help a lot, especially with trainings related to interpretative planning, management, creative writing and many other forms, involving not only heritage professionals as a target group, but also people from the local community. UNESCO aims to support learning at natural and cultural heritage sites in a fully holistic way (which is at the heart of UNESCO’s mission), towards a more sustainable future. So, in order to include some of the key aspects of UNESCO, we think that the heritage interpretation is the key point and we strongly believe that Ohrid region should become a good example for landscape learning. We can really empower the local community through heritage interpretation tools and we believe that with this type of activities we can be very successful in keeping or bringing back the Ohrid region on the Representative World Heritage List proposed by UNESCO.