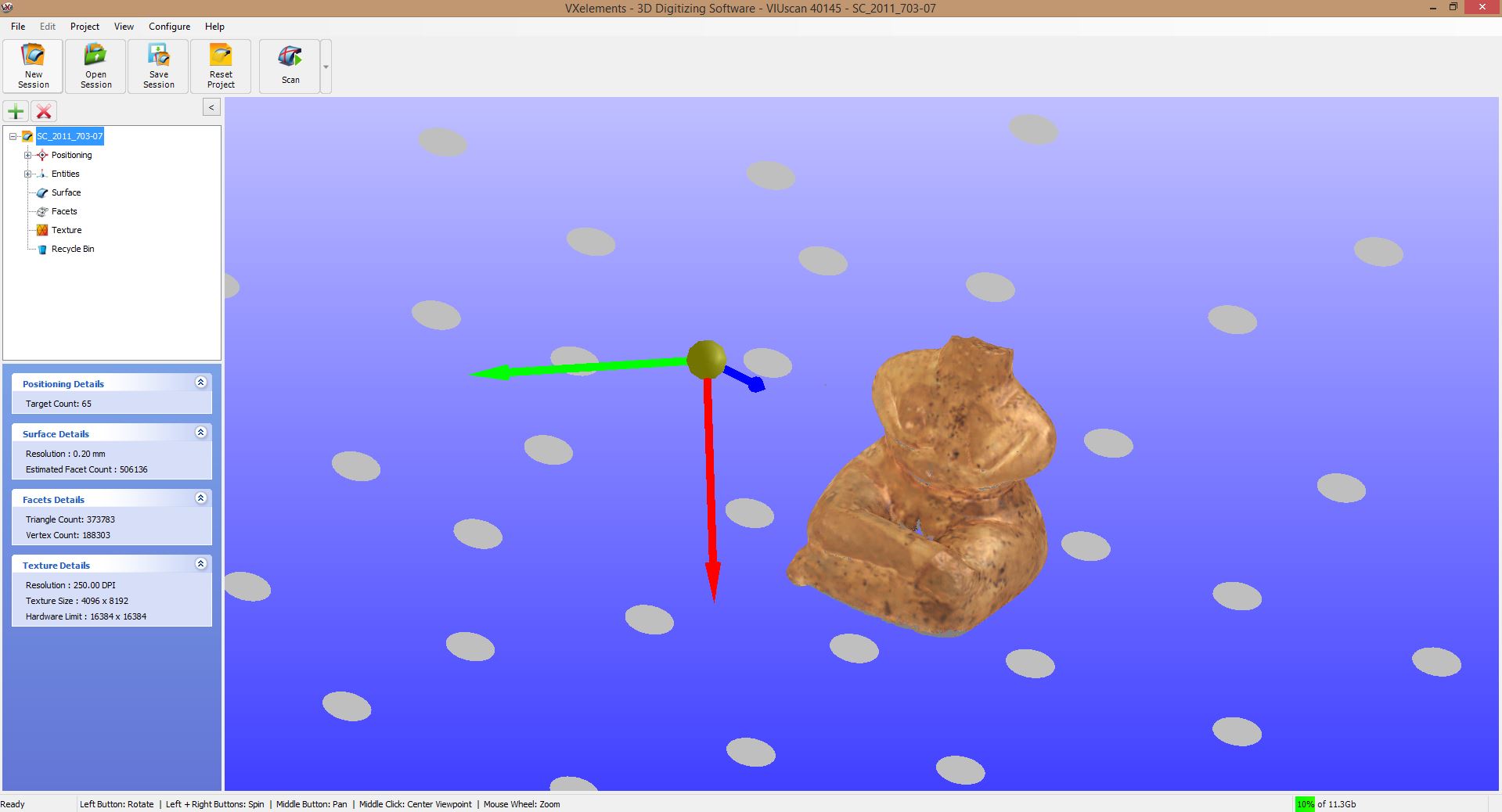 Clay Neolithic figurines are some of the most enigmatic archaeological objects, which depict in a miniature form humans, animals, other anthropomorphic or zoomorphic beings, and often hybrid or indeterminate entities. Figurines have excited scholarly and public imagination, and have given rise to diverse interpretations. The assemblage from Koutroulou Magoula, a Middle Neolithic site – 5800-5300 BC – in central Greece (excavated under the co-direction of Prof. Yannis Hamilakis – University of Southampton/British School at Athens and Dr Kyparissi – Greek Ministry of Culture), offers a unique opportunity to revolutionise the way we study and understand prehistoric figurines. This assemblage, one of the ten most significant archaeological discoveries in 2013 according to Heritage Daily, is the largest in Greece, and one of the largest in Southeastern Europe: more than 300 figurines and figurine parts have been retrieved to date (2001-2012) from a relatively limited excavation area, and all their contextual associations have been meticulously recorded. 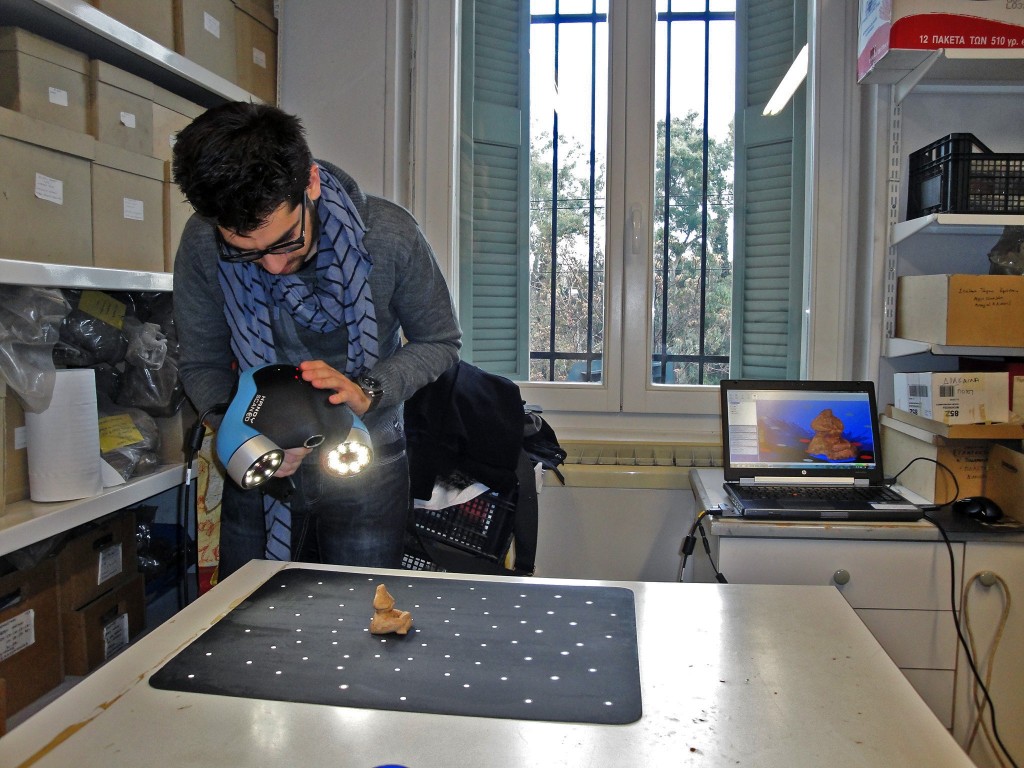 A few weeks ago we started our project ‘Corporeal engagements with clay’ (funded by the British Academy) aimed at recording, visualising and replicating the figurines from Koutroulou Magoula by using a tailor-made database so as to input all their details, as well as drawing, photography, laser scanning and 3D printing. Integral part of our work is the simultaneous collaboration between different specialists in recording and visualisation techniques, since each of the methods used provide details that could not be captured by any other means. Moreover, ten selected find spots of figurines will be radiocarbon-dated. Petrographic analysis will be carried out on 50 examples, to investigate provenance, and selection and processing of raw materials. Since several figurines were found in association with hearths, thermal shock resistance analysis will be carried out, to determine the thermal properties of the clay used, and explore the hypothesis of deliberate destruction by fire. We will also study their associations with other objects and the settlement as a whole, as well as the technological choices that governed the production of figurines. In addition, we will explore the possibility of their deliberate fragmentation.

The results, which will revolutionise the way we understand these objects, will be available to the public through an open database, which will also include the interactive 3D imagery obtained by the laser scanner. They will also be published as a separate monograph and articles in academic journals and popular magazines. 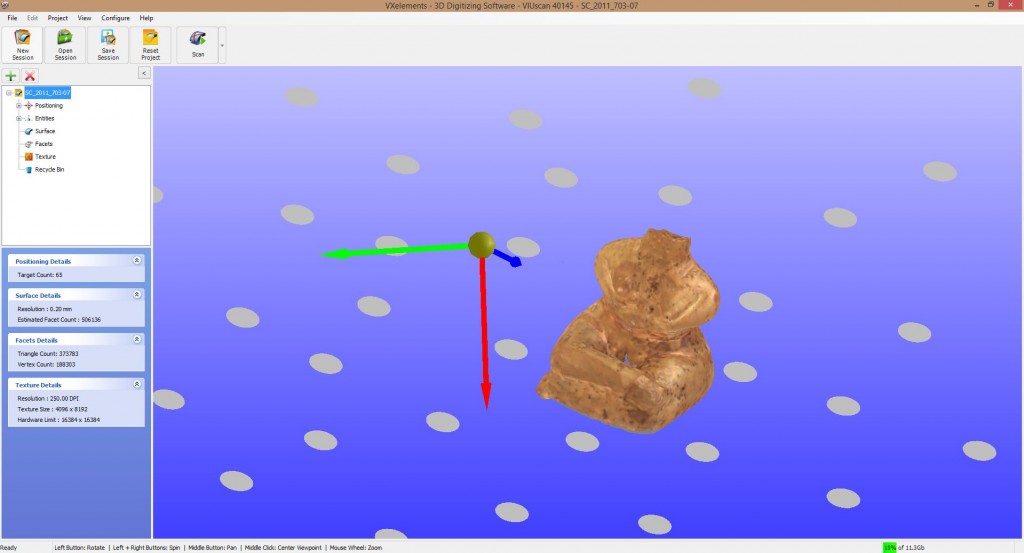 The Winchester School of Art has generously supported this project by lending their Creaform VIUScanner, enabling the thorough digital – three-dimensional documentation of the small-sized figurines. Moreover, given the fact that this material cannot be moved from Greece, the precise 3D data produced by the scanner will give access to both scholars and the public, providing the means to observe, study and construct interpretations of the material, while protecting the original. The detailed information that a scanner will produce, will allow further examination of figurines’ construction and use.

The handheld Creaform VIUScanner is a powerful machine that captures resolution of up to 0.1mm (0.2mm accuracy) and 250 dpi colour. Its use is very simple, since it is lightweight allowing a range of movements around the figurines, which are scanned on a black/matt surface with reflective targets. The laser beam emitted from the scanner enables the capturing of high geometric detail while an additional camera captures the colour of the objects. The fact that the results of the scanning are updated in real-time on a computer monitor makes the process easier since the user knows at any point which part of the objects are missing or have low resolution.

The precise and high-resolution 3D models that the scanner will produce will also allow printing exact 3D replicas of the figurines, therefore enabling physical access to the material for anyone interested within Greece and from abroad. Besides, experimentation with different printing materials will provide to researchers and the public different kinds of visual and haptic feedback, thus enabling alternative engagements with the material. Lastly, both the digital models and the replicas derived from these could become exhibits in museums and educational resources for the public.