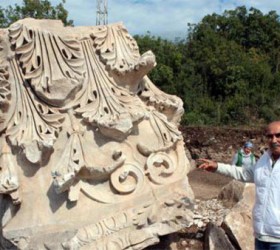 on Nov 6, 13 • by Haemus • with Comments Off on ‘Biggest’ Roman capital unearthed in Turkey


Archeologists on Friday have unearthed what they described as the “largest” and most “exquisite” Roman capital at the site of Kyzikos Hadrian Temple in Western Turkey. “This is the...
Pin It 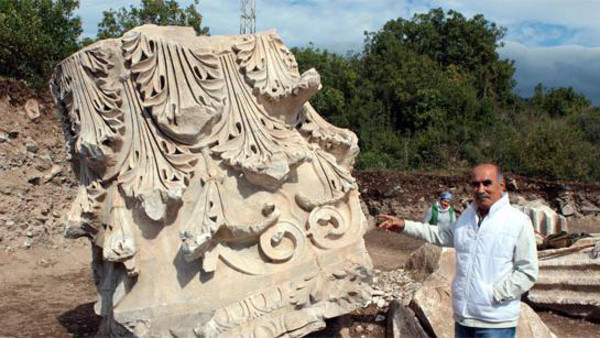 Archeologists on Friday have unearthed what they described as the “largest” and most “exquisite” Roman capital at the site of Kyzikos Hadrian Temple in Western Turkey.

“This is the largest and most exquisite Corinthian capital built within the territory of the Roman Empire,” the World Bulletin website quoted Nurettin Kochan, head of Ataturk University’s archeology team, as saying.

The 20-ton colossal Corinthian capital in Erdek district is said to be 1.9m in diameter and 2.5 m in height.
In architectural terminology, the term “capital” derived from Latin caput, or “head,” which forms the topmost member of a column.

It also mediates between the column and the load thrusting down upon it.
Calling the Temple of Hadrian the eighth wonder of the world, Kochan said “there’s no other capital of this size in the Corinthian order.”

He added: “Kyzikos Hadrian Temple outshines even the Baalbek Temple of Jupiter in Lebanon, considered the largest and most spectacular Corinthian temple in the world.”

The Corinthian order is chronologically the latest of the three recognized principal classical orders of ancient Greek and Roman architecture.

The excavation, carried out by a team of university professors, grad and undergrad students and dozens of workers, began on Aug. 15 and will continue until Oct. 8.

The team has also found the head of a large-scale bull figure.