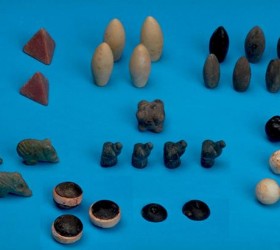 
Small carved stones unearthed in a nearly 5,000-year-old burial site could represent the earliest gaming tokens ever found, according to Turkish archaeologists who are excavating early Bronze Age...
Pin It

Small carved stones unearthed in a nearly 5,000-year-old burial site could represent the earliest gaming tokens ever found, according to Turkish archaeologists who are excavating early Bronze Age graves. 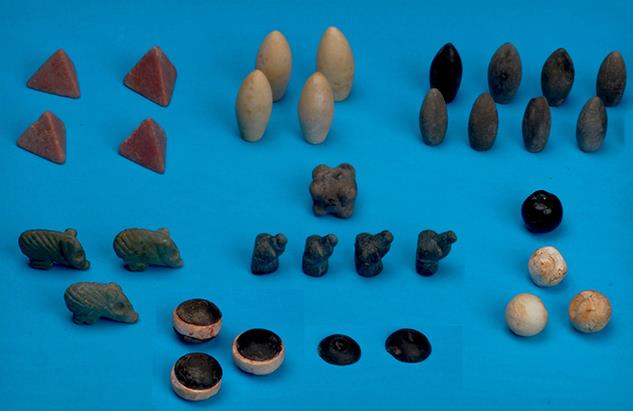 These sculpted stones unearthed from an early Bronze Age grave in Turkey could be the earliest gaming tokens ever found [Credit: Haluk Sağlamtimur]

Found in a grave at Başur Höyük, a 820- by 492-foot mound near Siirt in southeast Turkey, the elaborate pieces consist of 49 small stones sculpted in different shapes and painted in green, red, blue, black and white.

“Some depict pigs, dogs and pyramids, others feature round and bullet shapes. We also found dice as well as three circular tokens made of white shell and topped with a black round stone,” Haluk Sağlamtimur of Ege University in İzmir, Turkey, told Discovery News.

According to the archaeologist, who presented his finding at the annual symposium of excavations, surveys and archaeometry in Muğla, similar pieces were previously found in Tell Brak and Jemdet Nasr, two settlement mounds in northeastern Syria and in Iraq, respectively.

“But they were found as isolated, single objects, therefore they were believed to be counting stones,” Sağlamtimur said.

“On the contrary, our gaming pieces were found all together in the same cluster. It’s a unique finding, a rather complete set of a chess like game. We are puzzling over its strategy,” he added.

The find confirms that board games likely originated and spread from the Fertile Crescent regions and Egypt more than 5,000 years ago (Senet from predynastic Egypt is considered the world’s oldest game board). The tokens were accompanied by badly preserved wooden pieces or sticks. Sağlamtimur hopes they’ll provide some hints on the rules and logic behind the game.

“According to distribution, shape and numbers of the stone pieces, it appears that the game is based on the number 4,” he said. 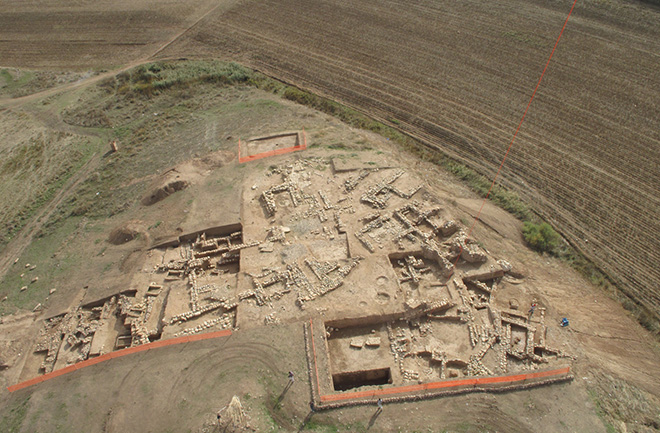 The playing pieces were recovered from one of nine graves found at Başur Höyük, a 820- by 492-foot mound near Siirt in southeast Turkey. Inhabited as early as from 7,000 BC, the site was on a trade route between Mesopotamia and East Anatolia [Credit: Haluk Sağlamtimur]

Archaeological records indicate that board games were widely played in Mesopotamia. Several beautifully crafted boards were found by British archaeologist Leonard Wooley in the Royal cemetery of Ur, the ancient Sumerian city near the modern Iraqi city of Nasiriya, which many consider the cradle of civilization.

Dating from the First Dynasty of Ur, around 2550-2400 B.C., the boards were associated with the “Game of Twenty Squares,” a board game played around 3000 B.C. Beautiful tokens related to the game were found arranged in a row, with the colors alternating, in another Ur tomb. The set consisted of seven shell roundels inlaid with of five lapis lazuli dots and seven roundels of black shale inlaid with five dots of white shell.

Much more elaborate, the newly discovered gaming stones were recovered from one of nine graves found at Başur Höyük. The site was inhabited as early as from 7,000 B.C. and was on a trade route between Mesopotamia and East Anatolia.

The majority of pots featured bitumen residues. Sağlamtimur believes bitumen was most likely part of a burial ritual or was applied to prevent secondary use of the pots.

Tens of thousands of beads made of mountain crystal and other types of stones were also recovered from the burials.

“The gaming pieces, thousands of beads, hundreds of complete pots and metal artifacts indicate those graves were not ordinary burials but most probably belonged to individuals of a ruling class,” Sağlamtimur said.

Radio carbon dating traced the grave goods back to 3100-2900 B.C., confirming the Early Bronze Age stylistic features of the items and the advanced technological level of the local population. 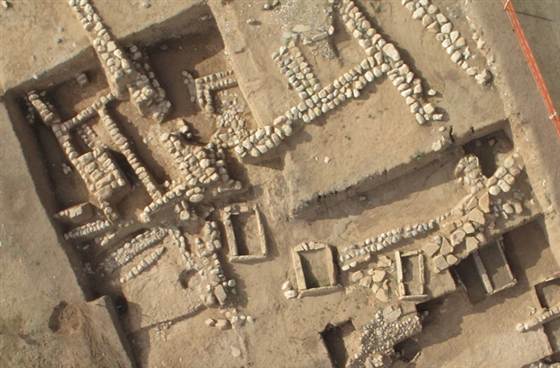 Much more elaborate, the newly discovered gaming stones were found in one of nine graves found at Başur Höyük. The burials revealed metal artifacts, ceramic finds and seals with different attributes and influences. This indicates the local people had close connections with their surrounding cultural regions.Radio carbon dating traced the grave goods back to 3100-2900 B.C., confirming the Early Bronze Age stylistic features of the items and the advanced technological level of the local population [Credit: Haluk Sağlamtimur]

“The graves contained metal artifacts, ceramic finds and seals with different attributes and influences which indicate the local people were in close relationship with their surrounding cultural regions,” Sağlamtimur said.

By the middle of the 4000 B.C., when the first great cities of history sprung up in Mesopotamia, the influence of the South Mesopotamia Uruk culture spread to the surrounding regions.

Significant differences emerged between the western communities of the Syrian-Turkish Euphrates Valley and the eastern settlements of the Al Jazira, the river plain of Mesopotamia which encompasses northwestern Iraq and northeastern Syria.

In the western communities, the urbanization process was halted, while clans with warrior leaders announced their power through complex funerary rites and burials rich with metal and weapons.

Meanwhile, the urbanization process continued in the eastern settlements with the development of a new culture called Ninivite 5. Like the Uruk culture, Ninivite 5 did not pay great attention to the funerary rites and burials were not particularly rich with artifacts.

“The findings at Başur Höyük add to our knowledge as they reveal a coexistence of traditions and a continuity of relationships between the settlements in the northern mountains and the Mesopotamia sites,” Marcella Frangipane, a professor of prehistoric archaeology at Rome’s La Sapienza, told Discovery News.

Frangipane is the director of excavations at Arslantepe, a remote site near the town of Malatya and the source of the Euphrates in south-eastern Turkey, some 250 miles west from Başur Höyük.

“The study of these findings, along with other discoveries in east-Anatolian sites, will allow us to reconstruct a new history of this region which is indeed the meeting point of the most ancient Near East civilizations,” Frangipane said.