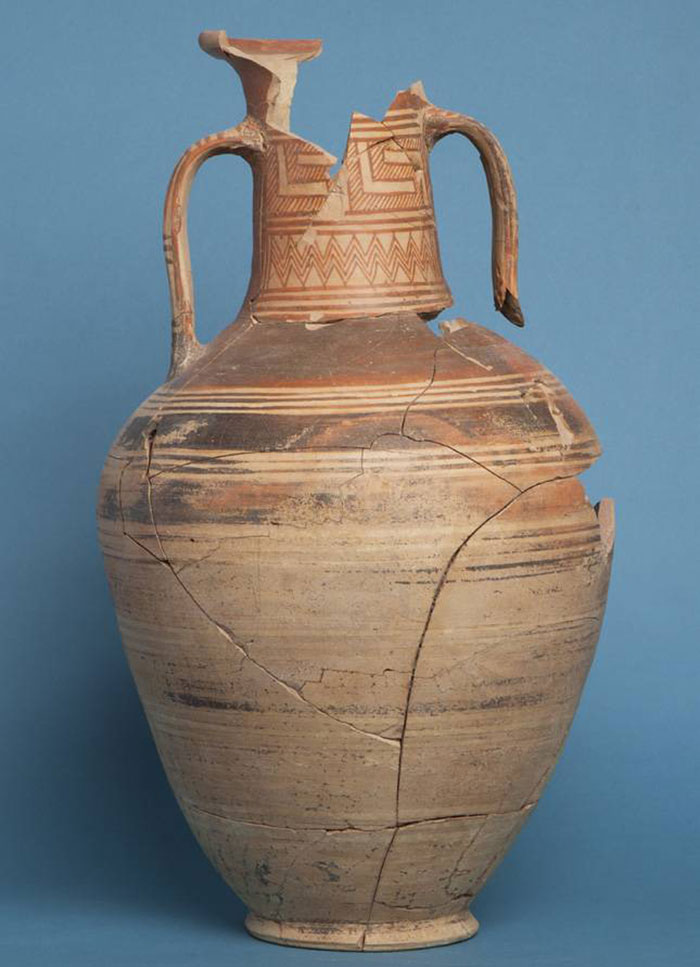 Archaeologists working at the ancient city of Corinth, Greece, have discovered a tomb dating back around 2,800 years that has pottery decorated with zigzagging designs. The tomb was built sometime between 800 B.C. and 760 B.C., a time when Corinth was emerging as a major power and Greeks were colonizing the coasts of the Mediterranean Sea. The tomb itself consists of a shaft and burial pit, the pit having a limestone sarcophagus that is about 5.8 feet (1.76 meters) long, 2.8 feet (0.86 m) wide and 2.1 feet (0.63 m) high. When researchers opened the sarcophagus, they found a single individual had been buried inside, with only fragments of bones surviving.

The scientists found several pottery vessels beside the sarcophagus, and the tomb also contained a niche, sealed with a limestone slab, which held 13 mostly complete vessels.

“The wealth of the occupant here is indicated by the sarcophagus and the large number of vessels,” writes a team of researchers in a recent issue of the journal Hesperia. Except for two vessels imported from Athens all the pottery was made in Corinth, the researchers noted.

The vessels were decorated with a variety of designs, including wavy, zigzagging lines and meandering patterns that look like a maze. This style of pottery was popular at the time, and archaeologists often refer to this as Greece’s “Geometric” period.

Several centuries later, in Roman times, the tomb would almost be destroyed after a wall was built beside it. When archaeologists excavated that wall, they found a limestone column that may have originally served as a grave marker for the tomb.

Rise of a wealthy city

A group of rulers called the Bacchiadae came to power in Corinth in 747 B.C. (a few decades after the tomb was constructed), ancient records indicate. Those rulers built colonies in modern-day Sicily and Corfu, decisions that helped Corinth increase trade and grow wealthy.

“Once these colonies in the west and northwest had been established, Corinth, because of its favorable geographical location, became the most important trading center for commerce between them and mainland Greece,” wrote Elke Stein-Hölkeskamp, an instructor at the University of Münster in Germany, in a paper published in the book “A Companion to Archaic Greece” (Wiley-Blackwell, 2009).

Corinthian goods, including the city’s fine pottery, would be traded throughout the Mediterranean world.

The tomb was found in 2006 during excavations done by the American School of Classical Studies in a part of Corinth now called the Panayia Field. A report on the tomb was published recently in the journal Hesperia. Four other graves had been found close to this tomb before 2006.