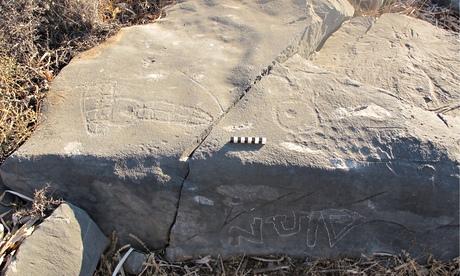 Certainly, Dr Andreas Vlachopoulos, a specialist in prehistoric archaeology, didn’t think so when he began fieldwork on the Aegean island four years ago. Until he chanced upon a couple of racy inscriptions and large phalluses carved into Astypalaia’s rocky peninsula at Vathy. The inscriptions, both dating to the fifth and sixth centuries BC, were “so monumental in scale” – and so tantalisingly clear – he was left in no doubt of the motivation behind the artworks.

“They were what I would call triumphant inscriptions,” said the Princeton-trained professor who found them while introducing students to the ancient island world of the Aegean. “They claimed their own space in large letters that not only expressed sexual desire but talked about the act of sex itself,” he told the Guardian. “And that is very, very rare.”

Chiselled into the outcrops of dolomite limestone that dot the cape, the inscriptions have provided invaluable insight into the private lives of those who inhabited archaic and classical Greece. One, believed to have been carved in the mid-sixth century BC, proclaimed: “Nikasitimos was here mounting Timiona (Νικασίτιμος οἶφε Τιμίονα).

Found at the highest point of the promontory overlooking the Bay of Vathy on the island’s north-western tip, the inscription has led the archaeologist to believe that soldiers may once have been garrisoned there.

Two penises engraved into limestone beneath the name of Dion, and dating to the fifth century BC, were also discovered at lower heights of the cape. “They would seem to allude to similar behaviour on the part of Dion,” said Vlachopoulos.

The epigrapher, Angelos Matthaiou, said the graffiti had not only shed light on the very personal lives of the ancients but highlighted the extent of literacy at a time when the Acropolis in Athens had yet to be built. “Whoever wrote the erotic inscription referring to Timiona was very well trained in writing,” said Matthaiou, for more than 25 years the general secretary at the Greek Epigraphic Society. “The letters have been very skillfully inscribed on the face of the rock, evidence that it was not just philosophers, scholars and historians who were trained in the art of writing but ordinary people living on islands too.”

Other rock art found at the site include carvings depicting oared ships, daggers and spirals – all still discernible despite exposure to the erosive effects of wind and sea.

As the best-known motif of early Cycladic art representing the waves of the sea, spirals symbolised perpetual motion as the driving force in the life and thought of island communities.

“We know that Greek islands were inhabited by the third millienium BC., but what we have found is evidence that, even then, people were using a coded language of symbols and imagery that was quite sophisticated,” said Dr Vlachopoulos.

Unit recently, Astypalaia has been better known for its ancient cemeteries of mass graves containing the remains of newborn infants. Now erotica has to be added to that sorry tale.

“Few Greek islands have been properly explored or excavated and these findings are testimony to why it is so important that they are,” said the archaeologist.