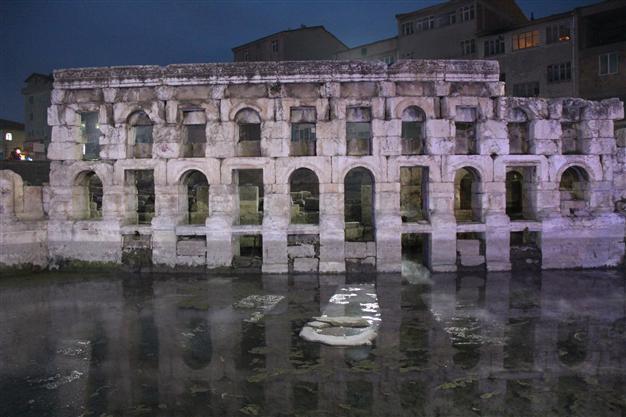 An ancient bath in the Central Anatolian province of Yozgat’s Sarıkaya district is one of the rare early Roman-era artifacts that still survive. The bath, called Basilica Therma, was a thermal center in the Roman era. Work has continued to open the bath to tourism.

Yozgat Governor Abdulkadir Yazıcı said the bath is a significant historical artifact for Turkey. “This place was also a center from where the eastern part of the empire was administered. Roman soldiers used this place to take a rest before setting sail,” Yazıcı said.

He said the figure of a snake “sticking out its tongue” in the Roman bath was the one and only of its kind among other Roman-era artifacts, representing a symbol of health and medicine.

“Thermal sources all around the country were used in the Roman era and thermal baths were built over some of them. The Sarıkaya bath is one of the rare thermal baths from the Roman era in Anatolia. In this structure, the hot water was sourced and used directly from underground. According to findings revealed during the excavations, hot water was used in some parts of the structure as a floor heating system. The buildings which stand in front of the historical structure have been expropriated and removed by the Culture and Tourism Ministry, while some parts of the structure are still underground. Then the big pool was unearthed,” Yazıcı added.

The governor said the excavations in the Roman bath also revealed unused pools from the Seljuk and Ottoman eras.

“The unique characteristic of the Sarıkaya bath is that water is still coming to the surface. Such baths are rare even in Europe. As we excavated, we found an Olympic-sized pool. A section was unearthed in the center of it; it was probably used as a baptism stone. Two other pools were also found in two different places. Work is continuing here; we are waiting for the relief and restoration projects to be prepared by the Yozgat Museum Directorate. After a rough cleaning, we will apply to academics for the more detailed work,” Yazıcı said.

“We are working to protect this world heritage location. The Sarıkaya Roman bath was a thermal treatment center in ancient ages. The friezes in the top part of the structure depict a bull head figure and snake figures. The snake figure is the symbol of Asklepios, the god of medicine and health in mythology,” he added.