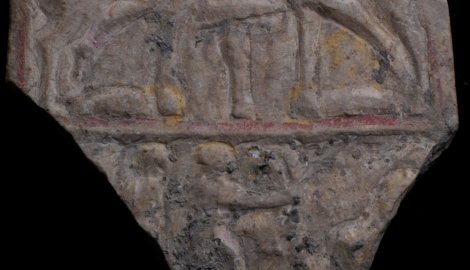 Viminacium was once the seat of the Roman province of Upper Moesia and one of the most significant Roman cities and military camps in the period between the 1st and the 6th centuries. The cult of the Danubian Horseman is a riddle to researchers and can still only be considered a mystical cult, Viminacium Director Miomir Korac has told Tanjug.

In general, the cult was widespread along the limes, a fortified Roman border on the Danube, but mostly in the Roman provinces of Pannonia Inferior (Lower Pannonia), Moesia Superior (Upper Moesia) and Dacia. Most often, the cult is interpreted as having a local origin, but it also features influences from oriental religions, mithraism in particular.

The image in the relief is divided into two sections – the upper section is not completely preserved and it most likely represented the celestial world, including busts of Sol and Luna. In the middle is an image of an unknown goddess standing in the central position, between two horsemen. The marble plate was painted in red and ochre, which is very rare, and the find is extremely significant for all future interpretations of this cult, Korac said.

Nearly all depictions of the Danubian Horseman found so far were cast in lead and bronze, with only one in marble. Judging by the mark on the back, the relief was most likely attached to the wall of a building, possibly even a temple.

Inside the area of the Viminacium archaeological park, several buildings have been found that point to temples once built in honor of Fortuna, nymphs (a stele marking the site of a nymphaeum was found last year), and, as suggested by the most recent find, the Danubian Horseman. Two weeks ago, archaeologists working at Viminacium found two exquisitely crafted marble slabs and a gold necklace from the ancient Roman era.