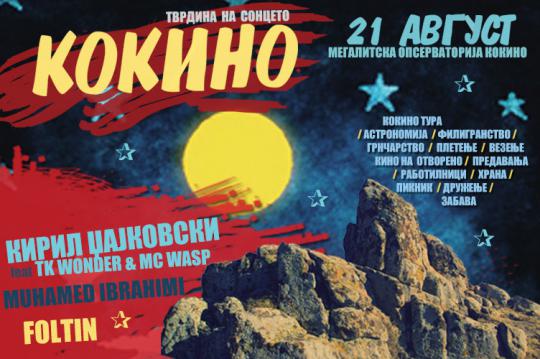 On 21. August 2016 starting at 05:00 pm, “The Fortress of the Sun” multimedia festival was held at Kokino, an archaeological site from Bronze age and prehistoric archaeo-astronomical observatory.  The happening was part of the ‘Kokino-Macedonian Brand’ project of the Ministry of Culture aimed to promote Kokino as one of the oldest observatories in the world. The extremely successful event was managed and organized by Password production.

Educational tours, ceramics workshops and astronomy lectures were part of the event, including poetry readings and concerts of prominent Macedonian musicians such as Muhamed Ibraimi, Foltin and Kiril Dzajkovski. Screening of short movies under open air crowned the event around midnight. Entrance to the event was free, and there was organized transport from Skopje by buses, which costed 200 denars (3 eur). Those visitors who came with their own car, a parking place was charged 100 denars (1,5 eur). The money collected from these tickets were donated to help people affected by the flood in Skopje.

Program activities at the event begun in the afternoon with organized workshops for filigree, pottery, origami, and alongside them courses and lectures on astronomy.  Parallel with these event were educational tour up to the Kokino site guided by the member of HAEMUS team. The main aim of these educational tour was introducing Kokino as a cultural heritage location to Macedonian visitors of the festival. We were very lucky making a contract with Password production to host these tours, since most of the HAEMUS members are both, professional archaeologists and professional tourist guides with a licence given by the Ministry of culture of the Republic of Macedonia. We would like to thank to the colleagues from the National Institution “Museum Kumanovo” who helped us a lot with the tours, since they are engaged with management, protection and promotion of Kokino as a local institution.

Approximately 35 km northeast of Kumanovo, on the left side of the asphalt road that leads from the village of Dragomance to the village of Arbanaško, rises the impressive neo-volcanic hill which, with its height of 1,013 m dominates over its surroundings and the village of Kokino that lies at its foot. At the very hilltop, known among the local population as Tatićev Kamen, two platforms stretching in the direction west/east and with the difference in altitude of ca. 20 m are made in the andesite rocks, covering an area ca. 90 m long and ca. 50 m wide. The most striking feature on the lower, west platform, is a block of several stone seats hewn into the rock and positioned in such a manner that the person sitting in them faces the east horizon. The upper platform is a flattened area also hewn into the rock, covered with a relatively thin layer of humus which, during the first excavations in 2001, yielded very rich and varied archaeological material. (more info)

Few tips and tricks how to get to Kokino

You can go to Kokino by car, bus or even bike. I would gladly recommend following the itinerary gained by the viamichelin.com site, because it is pretty accurate. If you start the trip from Skopje, you will drive with a vehicle approximately around 1,5 hrs to Kokino. The location is not far away, but the regional road is very bad so prepare yourself for a small adventure. In order to arrive to Kokino, you have to pass by the village of Staro Nagoricino (should stay by your left side) as well as the village of Dragomance and the bridge over the Dragomance river. You won’t miss the starting point of the site, since there is a small meadow and the explanation board. After that, just follow the signalization and for about 10 min walking you will rich the top of the site. (more info)