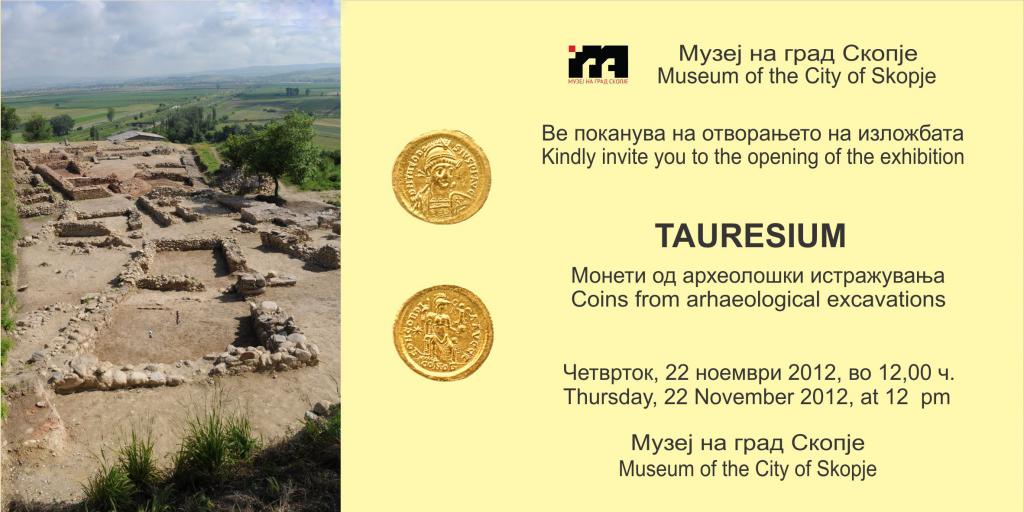 An important exhibition will open at 12:00 noon on Thursday, 22.11.2012, in the Skopje City Museum dedicated to the production of coins from Tauresium. Author of the exhibition is Kiro Ristov, MA, employed in the said institution, and long-time manager of the archaeological site Taor. In academic circles, this site is also known as ancient Tauresium, which, according to the written records of the historian Procopius, was the birthplace of the great Byzantine Emperor Justinian I.

The exhibition is set in 22 displays, where 427 coins out of a total of 523 will be presented, all of which have been discovered in the archaeological excavations up to date. The coins on display illustrate a chronological time-frame of the existence of the site, at the same time defining the economic state of the inhabitants at various periods. It is for this reason that the coins are presented chronologically in terms of the reigns of the emperors, as well as according to their nominal value.

The exhibition will be further accompanied by a high-quality catalogue in English and Macedonian, beginning with all the available information concerning the archaeological excavations carried out in Tauresium up to now and concluding with the production of coins by periods. The numismatic material has been borrowed from the collection of the Skopje City Museum, an institution under whose supervision the systematic long-time excavations in Taor are carried out. The online and social network PR for this exhibition was managed by the NGO Haemus – Center for Scientific Research and Promotion of Culture.