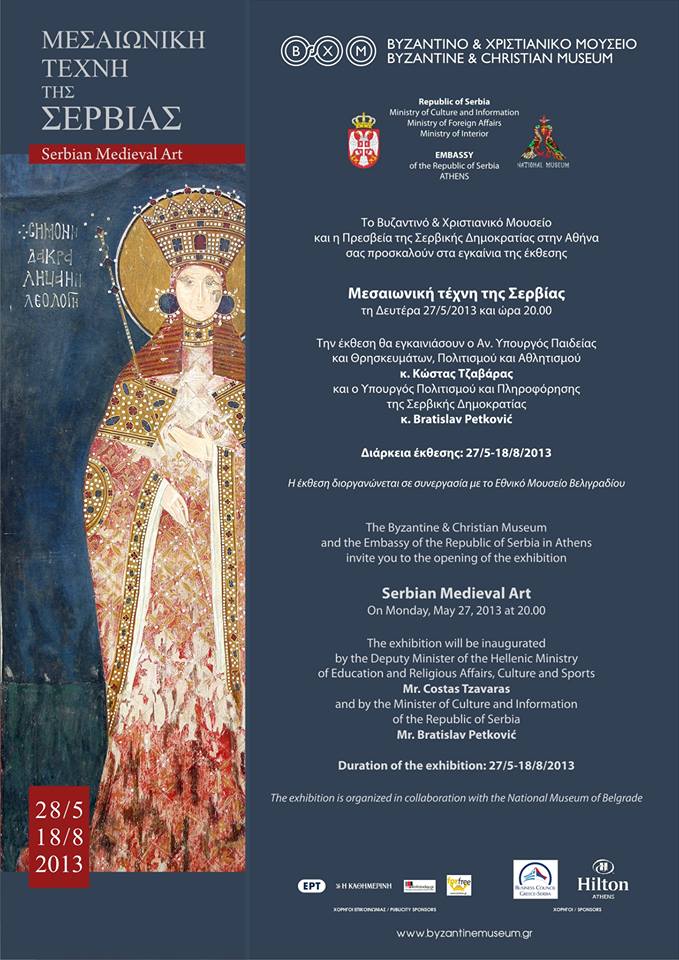 On Monday, May 27th, 2013 at 20:00 the Deputy Minister of Education & Religious Affairs, Culture & Sports Costas Tzavaras, and the Minister of Culture and Information of the Serbian Republic Mr. Bratislav Petković inaugurate at the Byzantine and Christian Museum, the exhibition «Art of Medieval Serbia».

Notable objects, original and copies from the National Museum of Belgrade form an exhibition that is presented in the first floor of the Duchess of Plaisance building, and is divided into four thematic units.

On display are minor art objects (11th-14th c.), double-sided icons and Sanctuary doors and also wall-painting copies.
These copies reproduce wall-paintings from important medieval monuments of Serbia, i.e. from the monasteries of Μileševa, Sopoćani, Studenica, Gračanica and elsewhere, which reflect the values of the Byzantine artistic tradition.

These important items that will eventually be displayed in the New Permanent Exhibition of the National Belgade Museum, are presented in Greece as an ensemble for the first time, offering to the public the unique opportunity to come into touch with the medieval culture and art of Serbia.

In the exhibition area a short film (8 “) will be screened presenting the most important Serbian monuments of this period.
During the next months (June-August 2013) Serbian and Greek Byzantinists will give infrormal talks in specific issues related to the architecture, the painting and, in general, to the art of Serbia during the 13th and 14th centuries.