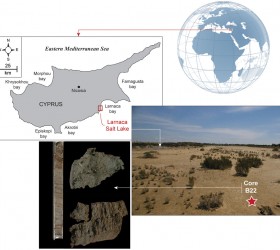 on Aug 20, 13 • by Haemus • with Comments Off on Catastrophic Climate Change Ends Bronze Age Civilisation


Archaeologists have long debated what caused the Late Bronze Age (LBA) world of the Eastern Mediterranean, a rich network of Aegean, Egyptian, Syro-Palestinian and Hittite...
Pin It 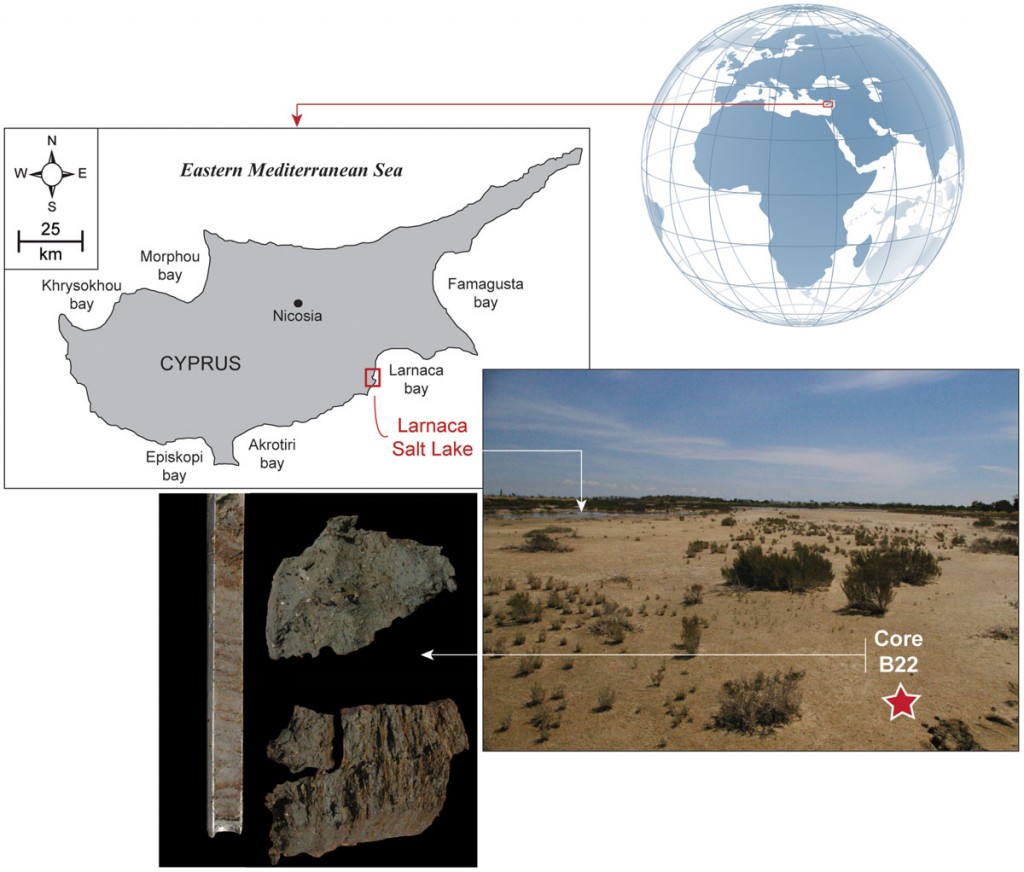 Map of Cyprus with an overview of the Larnaca Salt Lake (Hala Sultan Tekke) in the Larnaca Bay. Core B22 is indicated by a red star in the modern salty area. High concentrations of Posidonia oceanica fibers are highlighted in the corer, and in lower samples.

Archaeologists have long debated what caused the Late Bronze Age (LBA) world of the Eastern Mediterranean, a rich network of Aegean, Egyptian, Syro-Palestinian and Hittite civilizations to collapse about 1300 BC. Many scholars have cited warfare, political unrest and natural disaster as factors. But a new study supports the theory that climate change was largely responsible. 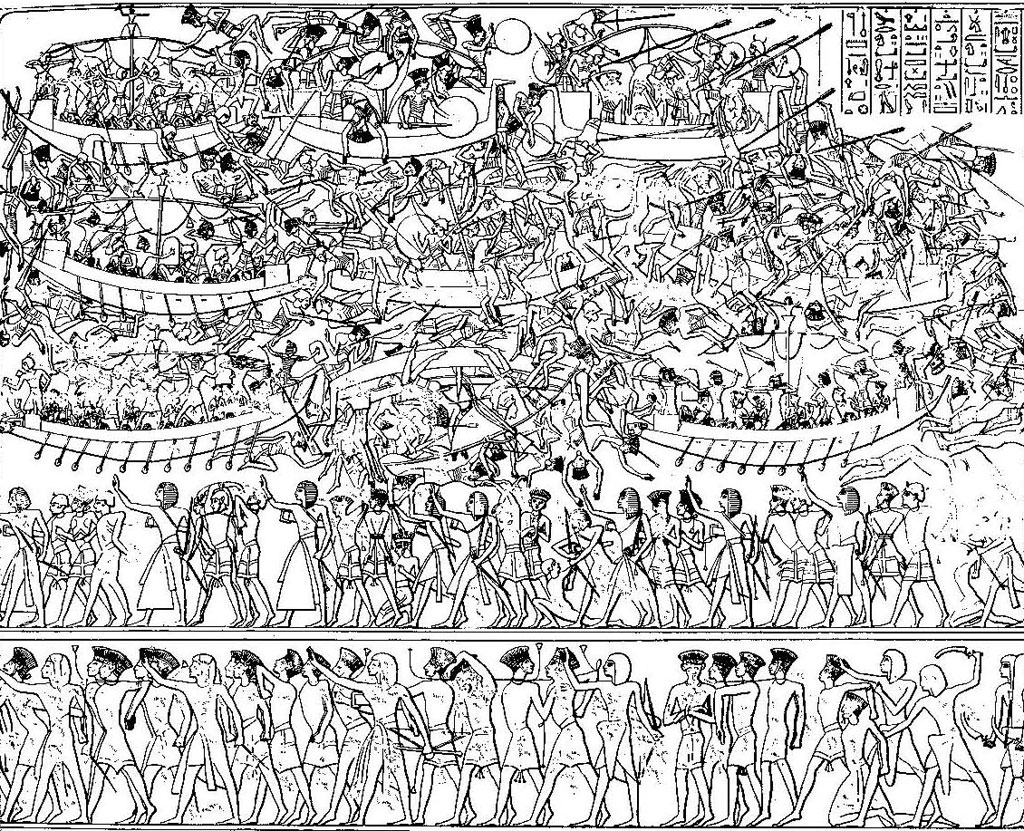 Relief from the mortuary temple of Ramesses III at Medinet Habu. Image: Wikimedia

Pollen grains from Cyprus provided the clue that a huge drought hit the region about 3,200 years ago. Inscriptions and clay tablets have described crop failures, famines and war all occurring during the same timeframe, suggesting that the drought triggered a chain of events that led to widespread societal collapse of these Late Bronze Age civilizations with population migrations and wars leading to new societies and new ideologies.

Egyptian bas-reliefs along with hieroglyphic and cuneiform texts portray the cause of the collapse as the invasions of the “Peoples-of-the-Sea” at the Nile Delta, the Turkish coast, and in the rich heartlands of Syria and Palestine there is a time when great armies clashed, famine-ravaged cities were abandoned, and the countryside itself became depopulated.
Despite abundant literature devoted to these Sea Peoples, we still do not know exactly who they were, where they came from, why they attacked and where they disappeared to after the raids. Some scholars are even uncertain whether the Sea People’s existence was a cause or an effect of the decline of the LBA.

The new palaeoclimate data from Cyprus for the Late Bronze Age crisis, alongside a radiocarbon-based chronology integrating both archaeological and palaeoclimate proxies, reveals the true extent and potential effects of abrupt climate change-driven famine and a definitive causal linkage with the Sea People invasions in Cyprus and Syria. Between 1206 and 1150 BCE almost every large city between Pylos in Greece and Gaza at the southern limit of the Levant was abandoned. 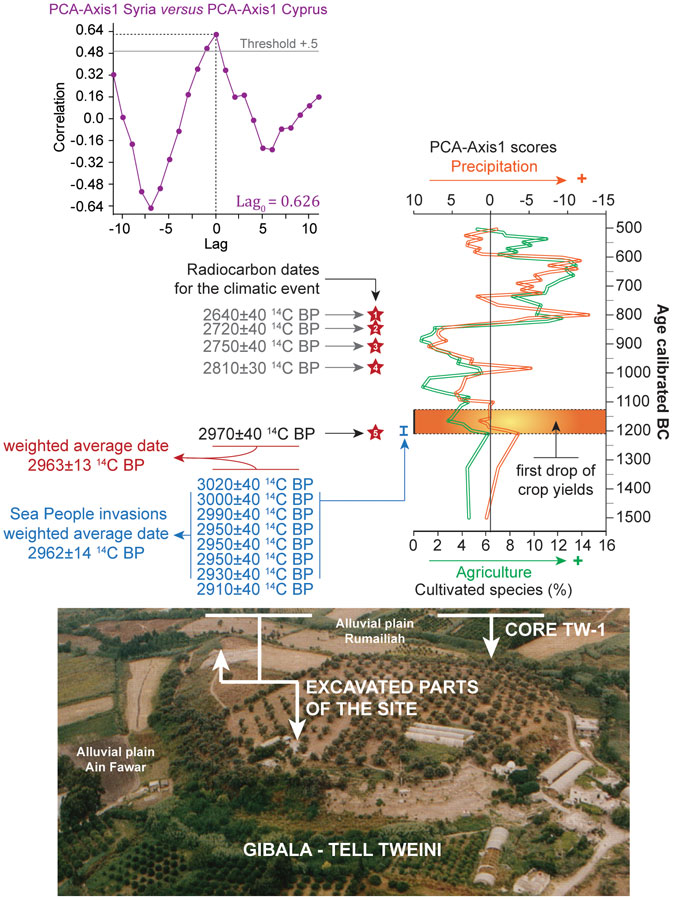 Radiocarbon-based archaeology, climate and agricultural productivity from Gibala-Tell Tweini, Northwest Syria. The pollen-derived climatic and agricultural proxies are plotted against time (1500–500 cal. BC). Radiocarbon dates for the ca. 300 year dry event are indicated with red stars. The time-window of the invasions at the Bronze-Iron Age boundary is framed by radiocarbon dates from the destruction layer (blue). At the top, the cross-correlogram shows the correlation between the pollen-derived proxy of moisture availability from Hala Sultan Tekke and that from Gibala-Tell Tweini.

The researchers drilled a core about 27 feet long from the bed of the Larnaca Salt Lake on the island of Cyprus which is acknowledged as a major centre of ancient eastern Mediterranean trade and then used radiocarbon dating to determine the age of each sediment layer.

Then they examined the pollen grains preserved within the core and were able to identify the tree species each grain came from, producing a time line of the vegetation in the region.

They found that lush woodlands gave way to arid grasslands about 3,200 years ago, marking one of “the driest [periods] of the last 5,000 years in the eastern Mediterranean region,” said Joel Guiot, a palaeoclimatologist at Aix-Marseille University in France and a study co-author.

Analysis of marine fossils in the core revealed that the site was once a bustling harbour that had dried into a landlocked salt lake, disrupting trade and farming.

Their findings closely match archaeological evidence of the collapse of civilizations in the region. The last trace of Late Bronze Age artefacts dates to the same time as the climate shift, while hieroglyphs and cuneiform texts describe famines and waves of mysterious “sea people” raiding Egypt, Turkey, Syria and Palestine’s shores about the same time. Archaeologists are now able to suggest these people were probably eastern Mediterraneans fleeing inhospitable homelands, seeking new areas to settle in mass migrations.

Gibala-Tell Tweini was a thriving trade centre located on the coast of the ancient Ugarit kingdom, where large-scale excavations over the past 13 years have unearthed a well-preserved destruction layer coeval with the end of the Bronze Age world. A stratified radiocarbon-based archaeology has given the first chronology for the Sea People raids with a mean radiocarbon age of 2962±14 14C yr BP, calibrated to 1 σ at 1215–1190 cal yr BCE.

By combining environmental and archaeological data, the study marks a serious investigation into the root cause of the LBA collapse in the Eastern Mediterranean – and without a doubt, climate change and the subsequent drought and three hundred years of reduced rainfall is that cause.

Guiot concludes, “We tend to focus on political, human-driven problems, but there isn’t a human driver for the destruction that matches what happened 3,000 years ago.”

The study serves as a reminder for current generations to address climate change, especially in the Mediterranean, he said.