Movie-like landscape. On a hill at the end of the village of Kurbinovo, overlooking the Prespa Lake, is the small single-nave church of St. George. The portrait of the donor is badly damaged, and there is no other written information about the founder of the temple except for the inscription on the altar that the frescos were painted in April 1191, and probably the church was built a year earlier.

The church of “St. George” in the village of Kurbinovo is of great cultural, historical and artistic importance not only to North Macedonia, but also to the world medieval fresco painting tradition. Built as part of the Byzantine building tradition in the Constantinople church concept, in addition to the church architecture, the unique frescoes place it on the map of world heritage monuments. With some damages, the painted ensemble is preserved almost in its entirety, and is among the most beautiful Byzantine achievements from the reign of the Komnenos dynasty.

The particularity of painting is in the introduction of iconographic innovations, while the pictorial handwriting of the unknown painters from Kurbinovo records the saints’ images that are elongated in the Mannerist style, with sumptuous robes that seem to float in space. The characters deployed in the seamlessly balanced scenes with such inner emotional charge remain with you long after you leave this holy place. The status of the church as a national heritage is confirmed by the segment of the fresco of Saint Archangel Gabriel, i.e. the Angel of Kurbinovo, taken from one of the altar frescoes, placed on the 50 Macedonian denar banknote.

Archangel Gabriel, fresco from the church of St. George in Kurbinovo – 12th century, detail presented on the banknote of 50 Denars

Due to these facts, the temple in the village of Kurbinovo attracts the attention of world researchers, architects, diplomats, tourists and lovers of medieval art. They come from different parts of the world to enjoy this superb artistic achievement that occupies a special place as the jewel in the crown of the Byzantine art. It is no coincidence that on the shores of Lake Prespa, in June 2018, Macedonia signed a landmark agreement that solved the decades-old dispute with Greece. With this rebranding of the name, the state looked into the future, casting back a look on its profound ancient past.

In the meantime, while the precious fresco paintings are disappearing before our eyes, the church of St. George has been the target of political bickering for decades. An article from “New York Times” in 2019 raised the alarm about this temple which is currently covered in scaffolding and is not only a cultural monument protected by law, but also a benchmark for the conflicts in the cultural policies of Macedonia that are influenced by the local and regional rivalries. 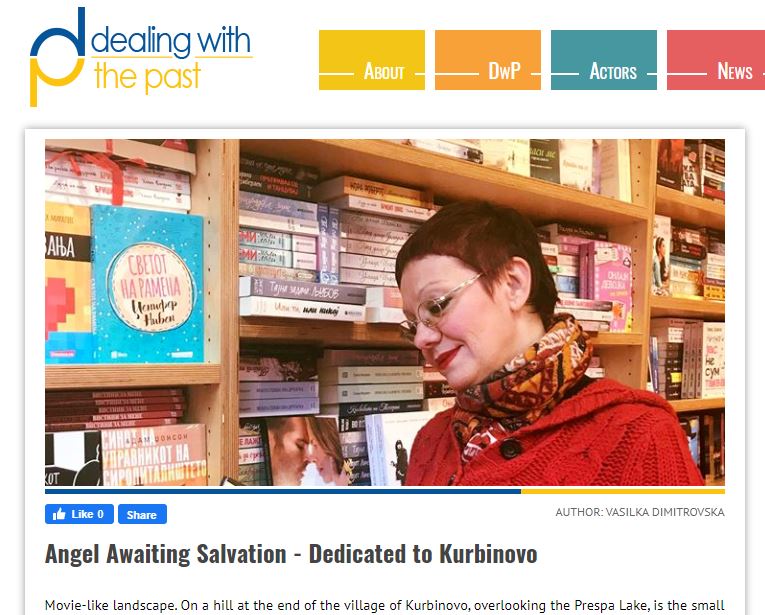 The Government of North Macedonia, which plays a major role in any project of cultural significance for the country, appears as the major financial donor to the processes of preservation. The previous establishment of the Ministry of Culture that squandered money for the controversial project “Skopje 2014”, while the church in Kurbinovo was left without financial support for more than a decade, and the restoration was interrupted due to “preparing additional analysis”, had been the target of criticism for years. Experts have continuously appeared in the media, highlighting the need for urgent work on the building which is increasingly exacerbated by the poor quality restoration. Apart from the object, the surroundings have also been neglected. There is no signalling on the road, it is unpaved and in poor condition, and the church does not have the necessary infrastructure to welcome the tourists who come to visit. Those who manage to find their way to the temple are mostly welcomed by locals who take care for the temple and appeal for help to the local government. After the failed preservation of the frescoes in the past, and the poor state of architecture in general, today, the temple is stuck in the strange labyrinths of administrative procedures.

Despite the many studies conducted so far, the mystery of the construction of the church near Lake Prespa that lies on the border between Albania, Greece and North Macedonia remains unresolved and is adding to its charm. Foreign ambassadors in North Macedonia describe the church in Kurbinovo as a blend of Rome and Byzantium, a symbol of the common European cultural heritage of the Europe the politicians want to build. But the 12th century church in the village of Kurbinovo is a striking display of carelessness of a country for its own, and the world’s, cultural heritage. It is obvious that the “Angel of Kurbinovo” which we use in our everyday exchange as “means of payment” where the picture from the distant past is frozen in time, would wait long for its “salvation”.

Vasilka Dimitrovska has an MA in Archaeology and is the cultural heritage manager and director of HAEMUS – Centre for Scientific Research and Promotion of Culture based in Skopje. The article was originally published on the Dealing With The Past web site, a project by Forum Ziviler Friedensdienst and it is available in Macedonian, English and Albanian.