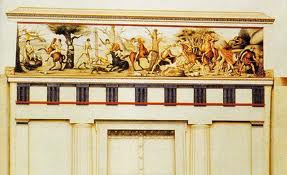 Construction of a multipolar museum in Vergina was set to start on June 6 but it won’t be finished until 2015, the head of 17th Ephorate of Prehistoric and Classical Antiquities  Angeliki Kottaridou said at a news conference.

The first exhibit is planned for December 2015. There was no explanation why it would take so long. In the museum, the visitor except for the exhibits will have the opportunity to make a digital guide in ancient Macedonia and to obtain information about its history.

Besides launching the construction of the museum, Kottaridou said that in Vergina new royal tombs were found. The announcements on this subject will be released within the next days.

The other two tombs were found to have been sacked. Tomb I or the Tomb of Persephone was discovered in 1977 and although it contained no valuable objects, on its walls were found a marvelous wall painting showing the abduction of Persephone by Hades.

Archaeologists were interested in the hills around Vergina as early as the 1850′s, supposing that the site of Aigai was in the vicinity and knowing that the hills were burial mounds. Excavations began in 1861 under the French archaeologist Leon Heuzey, sponsored by the Emperor Napoleon III.

In 1937, the University of Thessaloniki resumed the excavations. More ruins of the ancient palace were found, but the excavations were abandoned on the outbreak of war with Italy in 1940.