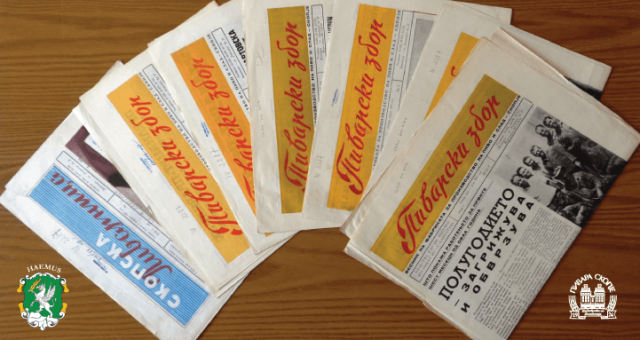 During the period of self-government, or during the socialism, Pivara Skopje was called “Beer and Malt Factory – Skopje”. We learn this from the specialized journal of the company, which according to the data available, was being published from 1967 to 1969. The journal was conceived as a periodical monthly newsletter of the brewery reporting on the current state of the company. The first issue came out on January 1, 1967, under the name “Skopska Pivarnica”, but already in the second issue, in February, it changed its name to “Pivarski zbor – Journal of the Beer and Malt Factory – Skopje”. Editor-in-chief was Jovan Kokolanski, while the members of the editorial board were Stanojcho Stamenkovski, Ivan Nikolovski and Ljube Zafirovski.

From a content point of view, in the context when workers’ rights were at the very center of state ideology, “Pivarski zbor” was intended primarily for brewery employees as a means of informing and motivating them. Topics, such as solving their housing issue and the amount of personal income were addressed for which draft rulebooks were published, along with information on specialized qualification and retraining courses, procurement of new machinery and improvements in production capacity and barley quality; it was being emphasized that the quality of beer is an essential condition for the competitiveness of the finished product on the Yugoslav and international markets, and thus for the success of the company as a whole.

In addition to practical issues that directly concerned employees, topics of an ideological nature were also addressed. The newspaper reported on the activities of the Local Organization of the Communist Union within the Beer and Malt Production Factory – Skopje, with stimulating headlines such as “Every Fifth – Communist”, condemning colonialism and imperialism, employees expressing concern over the Vietnam War or even fundraising for the Arab countries, “victims of imperial aggression”. Of course, greetings for holidays such as May 1 – Labor Day and March 8 – Women’s Day, as well as public holidays, followed by commemorative articles and a variety of entertaining content were not lacking.

However, the journal’s central focus was on producing quality beer and finding ways to cover the entire Yugoslav market, to satisfy the taste of foreign tourists, but also going outside state borders. Interestingly, despite the socialist system, according to state policy, the brewery was open for cooperation with countries from both blocks. Machines and production lines were procured from West Germany, but brewing experts from Czechoslovakia were also invited; the then chief executive of Sofia Brewery was also invited, who, as “Pivarski zbor” reports, had the outmost praise for Skopje brewery and the quality of Skopsko beer.

In addition to regular contributors, the journal was open to cooperation and suggestions from its readers. Surveys were conducted and letters were received from all over the republic. Readers have suggested different types of packaging, better advertising, dark beer production, suggested opening a brewery in Skopje, or simply praising the quality and even the healing power of Skopsko beer. As a demonstration of objectivity, a letter has been published by a reader who disliked Skopsko beer and thought that Yugoslav beers were generally of poorer quality than beers in West Germany, Poland or Austria. Of course, this is also a reflection of the benchmark for top quality and the strive to achieve it. “Pivarski zbor” clearly expressed the vision of the company as a top quality beer maker worldwide. Because, there can be only one Skopsko!

The text has been adapted and partially revised from HAEMUS’s original scientific research project entitled “Study on the History of the Steam-Powered Brewery AD Skopje”, commissioned and supported by Pivara Skopje AD.