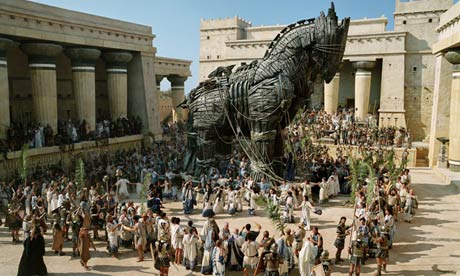 Homer’s story of Odysseus’ struggle to get home from Troy, The Odyssey (which dates from at least the 8th century BC), was used in the ancient world for moral instruction. But I find that the stories lend themselves better to critical and philosophical thinking.

This is because the stories contain so much complexity and ambiguity that they engage young people in a much more interesting way than straight moral tales. Many education professionals feel that everything has to be made relevant to the childrens’ direct experience – as if children don’t have an imagination – and that everything old needs to be updated. But there is a real danger that the universal quality of great stories, such as those found in the Odyssey, will be overlooked.

There have been ‘philosophical novels’ written for children before, such as Matthew Lipman’s Pixie, but these have very quickly dated and have cultural references that fail to travel. The same fate will not befall the Odyssey if it’s left as close to the original as possible. The Arab countries have their own version of the Odyssey in The Tales of Sinbad, and it is widely thought that Sinbad was modelled on the Odyssey, which would have travelled well beyond the borders of Greece.

Homer’s work is full of big questions including: the legitimacy of war; moral dilemmas (Scylla and Charybdis); moral relativism (the Laestrygonians and Ciconians); the nature of love (Kalypso); the value of happiness (the Lotus Eaters and Circe) and personal identity (The Phaeacians). All are universal issues that affect us just as much as the people of antiquity. Porphyry, a philosopher of antiquity, recommended that the Odyssey be used for teaching philosophy and that’s just what I’ve tried to do in a modern British primary school context. This has prompted me to use Homer as a source to spark debate among children today.

The children sit in a big circle. We begin by looking at one of the online maps available with the book I’ve written to support my teaching, that records Odysseus’ progress around the Mediterranean and beyond, then I tell or we read the latest installment. We stop reading, usually at a crisis point in the story, to conduct a philosophical enquiry around the issue present in the crisis.

Enough time needs to be left at the end of every lesson, however, to finish off the story, usually on a cliffhanger such as the ship hitting the shore of some unseen island in the night, leaving the children wanting more. Each session is about an hour long and, if you work through all the stories (though you don’t have to), it takes about 14 weeks to complete.

To use an example, the opening sequence of The Odyssey describes the war between the Greeks and the Trojans; this lends itself to a discussion of when is one justified to go to war and when at war, what is one justified to do? The first two stories (the Wooden Horse and the Ciconians) explore each of these questions respectively. Each story thereafter tackles a different philosophical theme or issue.

And if you think that there couldn’t possibly be a philosophical theme in each and every one of the stories then think again. It’s all in there. The story of Aeolus and The Bag of Winds allows for an exploration of rulership in a debate between autocracy and democracy; the section with Tiresias and the Underworld brings prophecy, the nature of one’s future and one’s control over it into the classroom; the wonderful story of the Sirens has one of the most profound and sophisticated metaphors for freedom and desire that has ever been outlined either in fiction or by philosophers.

For me, the most rewarding part of teaching philosophy through the Odyssey is seeing the children respond so positively to an ancient story and connect with the characters. Choice moments that seem to really affect the children include: when Odysseus and his men reach the bay where their families await them but then, due to their own hubris, they are blown back out to sea by the winds that had been trapped by Aeolus’ bag; the children’s responses are unforgettable when Odysseus descends into the underworld to speak to Tiresias and is devastated to discover his own mother there, having died of a broken heart waiting for him; and, of course, the children share with Odysseus a sense of achievement when they reach the end – it’s not just Odysseus that has completed an ‘Odyssey.’

When we are exploring the existential angst facing Odysseus upon meeting with the monsters Scylla and Charybdis, one primary-aged boy said to me: “What have monsters got to do with real life?” A girl in the same class saved me the trouble of having to try to answer him: “It’s not really about monsters, it’s about difficult choices.”

Working with children and Greek culture like this has also made me think more about the nature of stories, why they are important to us, how to work with them. Storytelling creates a direct line of communication between the teacher and their pupils. Telling the Odyssey seems to make the story happen in the room and in real time not some three thousand years ago.

By considering these and other fictional, narrative situations in a story such as the Odyssey, the children have an opportunity to rehearse how they might respond to a similar situation, such as a dilemma, that they may find themselves faced with in real life. And what’s more, using a story or narrative, allows extremely complex situations to be put before the children that would otherwise be far too complex to describe in isolation.

When it is told in the context of the story of the Odyssey complex situations are easily understood by the children, the existential bite is then all the more easily felt. This teaches the children the trials of leadership by having felt its sting in the safety of a fictional, hypothetical setting.