The archaeological site of Vinica Fortress is situated southwest of the city of Vinica, on a fairly high hill which dominates over the entire surrounding area. It was recorded for the first time in 1953. The fortification (castrum) is polygonal in form and covers a surface of ca. 2,500 m2, stretching in the direction N/S; the structure is fortified with massive ramparts and semi-defensive towers.

It was the discovery of two intact and five fragmented terracotta icons in 1977 and the several following years that initiated the beginning of systematic archaeological excavations. On the southeast part of the site, thus far, a number of discoveries have been made in the area covering ca. 5, 000 m2; they include the following: parts of a rampart, two towers, a square, one street, several chambers (storage houses) with pythoses dug into the soil, a piscina, a prefurnium (furnace) for a small bath, a porch, a small single-nave church and a larger one in the shape of an inscribed cross, which is fairly damaged and around which more than a hundred graves dating from the period between the 11th and 13th centuries have been discovered, as well as a stone-built tomb vaulted with bricks, but opened and looted long ago. 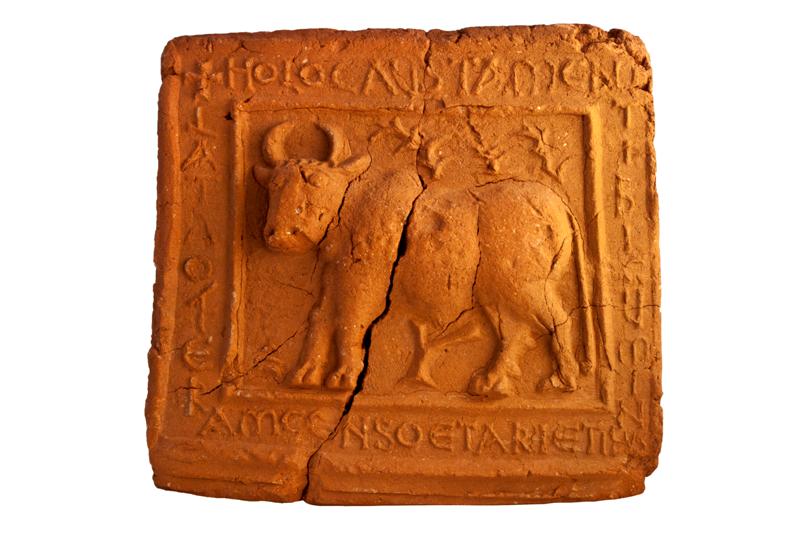 At this stage of its exploration, it can be said that Vinica Fortress had been continuously settled in the periods of theLate Bronze Age, the Iron Age, and the classical Greek period (with imported pottery from the 5th and 4th centuries BC.). Cultural horizons from the Macedonian-Hellenisticand Early Roman periods have not been recorded. The Late Antique and Early Byzantine periods significantly markedthis site with monumental architectural structures and movable archaeological material. The mediaeval period left its mark with the necropolis dating from the 11th and 12th centuries. The fortification (castrum) has two building phases, one from the late 4th and early 5th centuries, and the second, which dates from the late 5th and 6th centuries. This site is especially important due to the fact that in 1985, a discovery was made of a hoard with terracotta icons that were discarded as classical rubble at the entrance of the east tower, more specifically, behind the fountain and the small porch. This discovery opened a new page in the domain of Early Christian art in Macedonia and the wider region.

The basic characteristics of these terracotta icons are thefollowing: their dimensions are 32 x 28 x 4 cm (square icons)and 32 x 20 x 4 cm (rectangular icons) made with a mould and in high relief. Thus far, approximately 20 scenes have been identified, approximately 50 complete ones and about 100 fragments, with a number of replicas. The icons were made in a workshop that was part of the city complex that spread across the nearby hills, more specifically, to the west, as far as the site of Oreovo in the village of Leski. It should also be noted that they were mounted on the walls of sacral structures (the original mortar can be seen on their back side), in tombs, martyriums, etc.

On the basis of the iconographic analysis, they can be identified as icons which depict scenes from the Old Testament, illustrations of psalms, Christological depictions and depictions of figures of Christian saints, as well as depictions of famous wars. Their stylistic features, and especially the high relief, convey the exceptional plasticity of the style of the provincial artists and the local stylistic expression formed under a strong Oriental influence. All icons have texts in Latin carved on their edges; these texts, which convey a concise theological message, describe the respective scene or figure. In this sense, the general characteristic of these terracotta icons is the message about the victory over evil and death and the triumph over all the enemies of the faith.

Hence, it can be concluded that the Roman iconography and the presence of texts in Latin confirm the dominating influence of the Church of Rome in the region of Bregalnica in the Early Byzantine period. In terms of comparison, we can mention the terracotta icons from France, from the valley of the Loire, those from Italy, as well as the famous terracotta icons in the Bardo Museum. In the past ten years, the terracotta icons from Vinica have been exhibited and attracted special attention in cities and museums worldwide,