Home The Monastery at Matka

The Monastery at Matka

The church of the present-day monastery in the gorge of the river Treska dedicated to the feast of the Dormition of the Holy Mother of God was built in the late 14th century. This relatively small, but high-rising cross in square domed church belongs to one of the most common architectural types, characteristic of the taste of the local donors/landed gentry.The only inscription above the entrance to the church which dates from 1496/7 testifies to the devotion of Milica, the feudal lady from Skopje, who restored the ruined church roof, added the narthex on the west side and decorated the interior with frescoes. The inscription, in addition to the reference to Athanasius, the then Metropolitan of Skopje, the names of her late husband Tošinko and son Nicholas are also mentioned. Therefore, her figure and the figure of the young Nicholas stand in the painted ensemble on the south wall in the western part of the church, while the customary prayer for the deceased Tošinko is included in the donor’s inscription. It is not known when the added narthex built by Milica was destroyed. 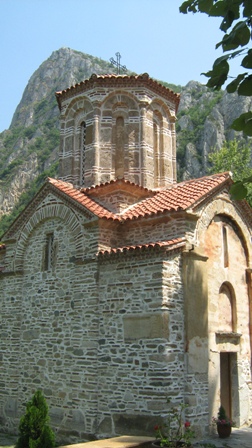 The stylistic and painterly characteristics of the fresco painting are indicative of the last reflections of the painterly discourse of the fresco painters of the Ohrid School of the 15th century, as well as the thematic approach characteristic of the Ohrid fresco painting of the 14th century, where St. Clement of Ohrid and his teacher, St. Cyril of Salonica portrayed in the north, i.e., southern wall of the altar space occupy a special place. The painter strove to adjust the customary subject matter in the central part to the complex organization and fragmented space of the cross in square church. His intention to present a large number of depictions was not always successfully carried out. This is especially characteristic of the fairly indistinguishable work on the vault surfaces with the illustration of the scenes from the Great Feasts and Christ’s Passion and Suffering. Nevertheless, the inspired narrative discourse of the painter, despite the limited space, finds its expression with the inclusion of an exceptionally rare depiction of Christ’s suffering inspired by the Gospel According to St. John, the episode when Christ talks to the soldiers who have taken him before the Roman governor Pontius Pilate. The patron of the church, the Holy Mother of God designated with the epithet Eleoussa, is shown enthroned on the richly decorated throne, accompanied with an angel depicted in obeisance to her, is given a dominating place on the south wall next to the iconostasis. Three more scenes on the west facade, i.e., on the east wall of the former narthex, are also dedicated to the Holy Mother of God: two illustrations of her life – the Nativity and the Presentation into the Temple, and one from the rich opus of laudatory verses celebrating her glory – “the Prophets Announced Thee”. 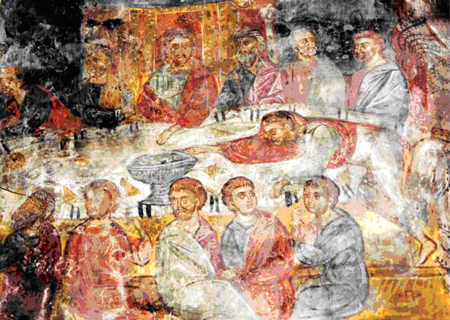 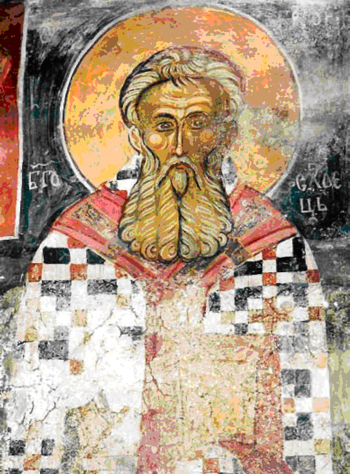 The presence of the figures of anchorite monks speaks of the presence of a long-established monastic temple, and the inclusion of the holy monks from the Serbian tradition, St. Simeon Nemanja and St. Peter Koriški, about the domination of the Patriarchy of Pek at the time of the renewal of the monastery and the painting of the wall decoration.