The Sultan Murat Mosque complex, the only sultanic endowment in Skopje, stands on a low hill in the central part of Skopje’s old town/Bazaar. It was built by Sultan Murat II  in  H.840/M. 1436-37. it was burnt down and heavily damaged a number of times during its existence, events and changes to which the three inscriptions above the entrance refer: the fire of 1537, after which it was reconstructed by Sultan Suleyman in 1539-42; it was burnt down by the infidels in H.1100/M.1689, when the Austrian armies, led by their military leader Piccolomini, set the whole city on fire, and renewed after twenty-three years in 1711-12 with the decree of Sultan Ahmed III. We learn from the third inscription that it underwent repair work for the last time in 1912, decreed by Sultan Reshad. There is no reliable data on the original appearance of the Sultan Murat Mosque; however, by the very fact that it was an endowment of a sultan, it must have been much more resplendent. in terms of its architectural features, as one of the largest mosques in Skopje, it belongs among the most significant specimens of ottoman building in the Balkans. 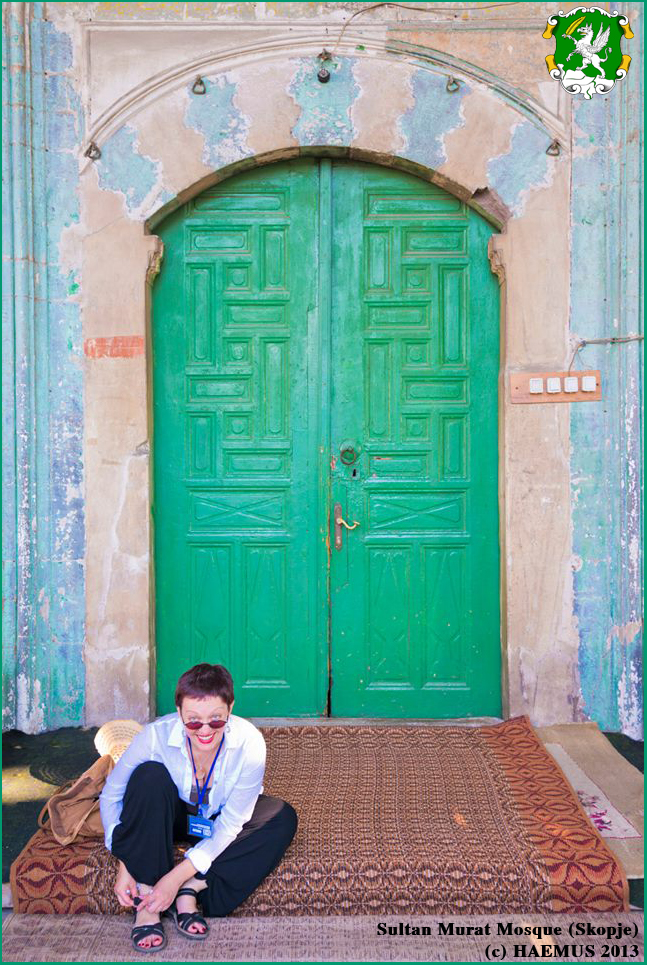 It has a basilical architectural form and is covered with a four-ridged roof. The interior is partitioned into three naves with rows of three columns; while the ceiling is made of a flat wooden coffered ceiling (a ceiling with sunken panels). The mihrab, minber and mahvil date from the 1910s. on the northwest side, along the entire width of the mosque, there is a porch open only on the front side, supported by four stone columns with opulently decorated capitals. The vertical axis of this edifice is emphasized with the slim minaret at the west corner of the mosque. it is built of finely chiseled stone, while one of its most prominent features is the stalactite decoration on the sherefe. The colourfulness of the mosque is further enhanced with the opus cloisonné building technique applied in its construction.

The wall decortion in the Sultan Murat Mosque, dated to the 18th century, displays the characteristics of traditional turkish decoration, which consists of lace-like intertwining vegetative motifs around the windows in the interior. Of special interest are the landscapes painted in rectangular frames applied as a decorative element. Their subject matter is sacral and profane edifices. The domed mosque with four minarets, each with three sherefes, and three-storey buildings adjacent to the courtyard of a mosque painted above the entrance in the prayer hall, right of the inscription, is probability a depiction of the Suleymaniye Mosque in Istanbul. The landscape left of the inscription, according to the typology of the elements painted, indicates that it is a depiction of one of the quarters of Istanbul.

The wall painting in the mosque is dated to different periods, which also implies the use of different materials and techniques. The analysis of certain segments of the landscapes and bands which reflect the influence of 19th-century western landscape painting suggests that they were painted later, in 1912, on the occasion of the visit of Sultan Reshad to Skopje. There is no information on the painter/painters of the wall decoration. Judging from the choice of landscape motifs painted in 1912, it is possible that it was painted by a painter commissioned from Anatolia. The system of wall decoration in the Sultan Murat Mosque, in terms of its theme and composition, is highly analogous to that of the Isa Bey Mosque in Skopje.

The complex also includes, in addition to the mosque, the tűrbe of Bikiy Han, the tűrbe (tomb) of Ali Pasha of Dagestan and the clock tower.

The tomb of Ali Pasha of Dagestan – The tűrbe (family tomb) of Ali Pasha of Dagestan, built in H.1188/M.1774, stands next to the east façade of the Sultan Murat Mosque. It belongs to the open type of tűrbes with a dome covered with lead. The dome, which has a hexagonal base, is supported by six massive columns. It is made of chiselled stone, with lead used as binding material. A mosque with a minaret, another fluted minaret and two flower vases are depicted in low relief on the façade. it houses two stone sarcophagi, the burial sites of ali Pasha’s wife and daughter.

The tűrbe of Bikiy Han (the tűrbe of the old Mosque) – The tűrbe of Bikiy Han stands on the south side of the mosque. The inscription above the entrance states that it was built in H.964/M.1556-57, i.e., in mid-16th century. It belongs to the type of closed tűrbes, with a square base and vaulted with a dome supported by tromps. It is built of hard material, with alternating rows of stone and brick, a technique which enhances the colorfulness of the façades. Sculptured decoration in the shape of rectangles placed one above the other can be seen in the corners below the tromps. The surviving fragments show that the interior was once decorated with vegetative ornaments. in the interior, there are five tombs without inscriptions. With its monumentality, the tűrbe of Bikiy Han is the largest among this type of edifices which survive in Macedonia.

In addition to these significant monuments, there is also a necropolis in the area surrounding the two tűrbes, with several grave markers.