The last painting coryphaeus in Macedonia before the Ottoman rule was the fresco painter metropolitan John. He and his brother – the hieromonk Macarius, who was an equally important painter himself – managed a painting workshop located in the monastery of Zrze, near Prilep, which was the centre of Prince Marko ‘s state. John’s painting revived the classical ideals, the strict proportions, the volume and all the fundamental stylistic elements of early 14th century court art. 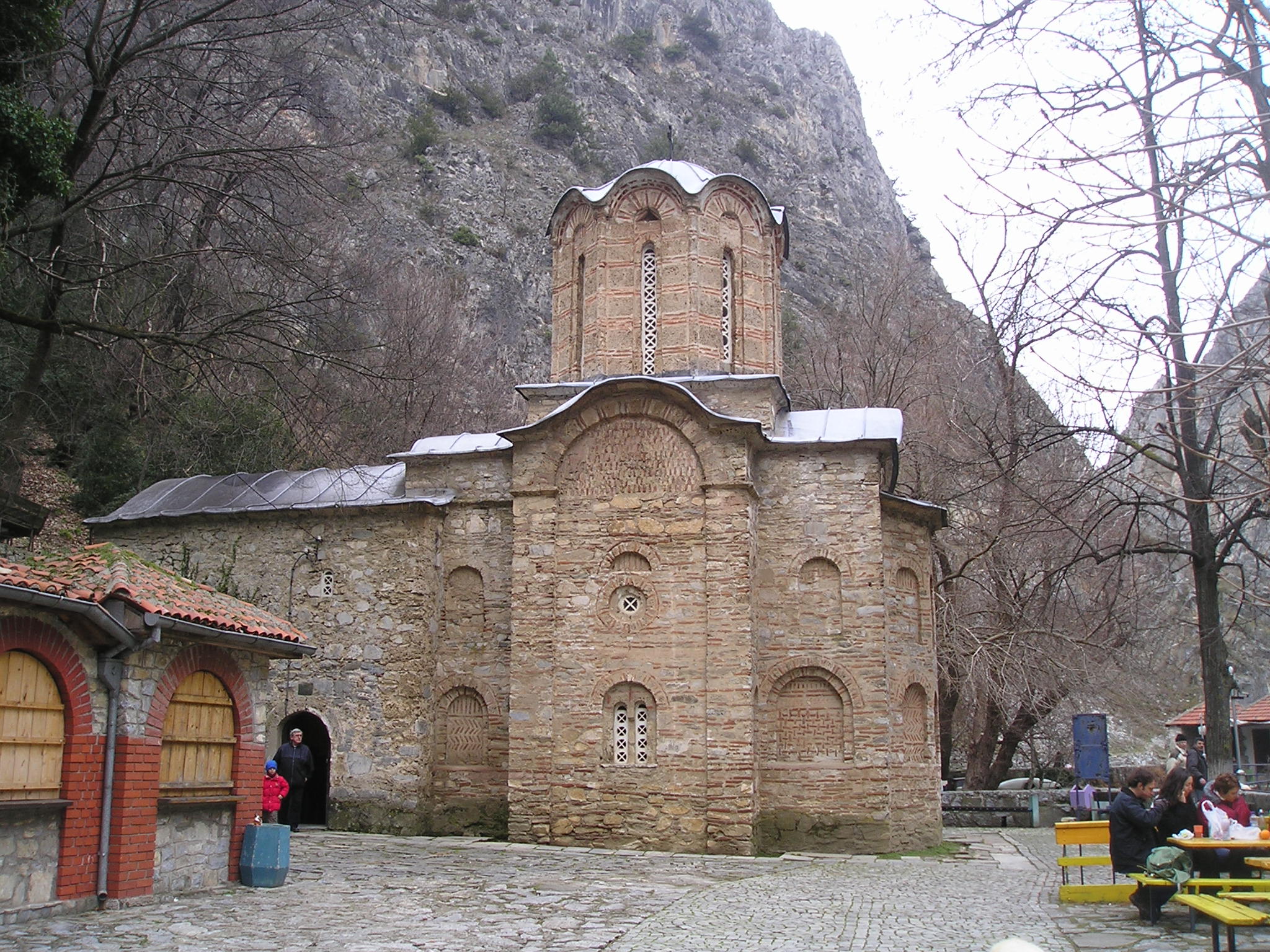 The ideal of beautiful shapes, well-contemplated proportions and balanced composition are immanent in the art of the frescoes in St. Andrew’s Church, which was erected in 1388/89 in the picturesque canyon of the Treska River near Skopje. The family bequest of Andreas, Prince Marko ‘s brother, is a three-concha domed church with a narthex that was added in the 16th century. With its ceramoplastic decorations and stone structure, the façade of this building intertwines with the gamma of the landscape like mimicry. Inside the dome symbolically rules Christ Pantocrator, surrounded by the prophets and attested by the evangelists. In the cycle zones there are only illustrations of the Feast and Passion scenes, while between them and the standing figures of the saints there is a frieze showing busts of saints. The altar space is dominated in terms of space and theme by the Luturgy of the Archpriests and the maesthetic figure of the Mother of God with Christ on a Throne, painted in the conch. 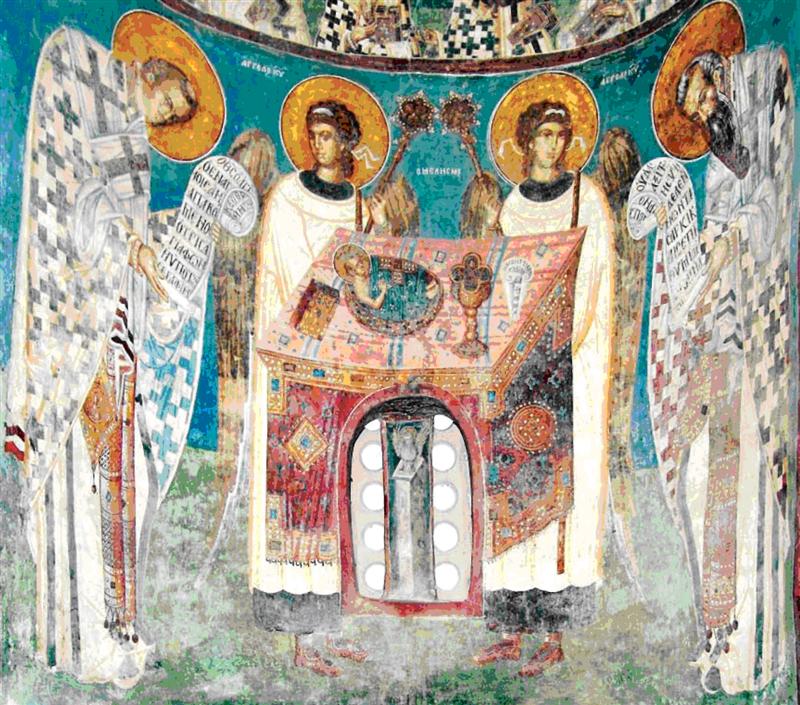 The Adoration of the Lamb is unique in the way it has been solved. In it, the visualised elevation of the Holy Table by the two angels dressed in deacons’ attire symbolically represents the prayer from the cherubic (angelic) song, written on St. John Chrysostom’s scroll. Lying on the Holy Table is a scroll with the text about the transformation of bread and wine into the body and blood of Christ by the power of the Holy Ghost, which has been illustrated on the column of the biphorium as a dove. The word “melismos”, written across the Holy Table, represents the “dismembering” of the offering/the Lamb, thus making the formation of the entire liturgical protocol complete and embodied in exceptional semantic density. The remarkable granite figures and the dark hue give this painting its religious fibre. The standing figures, indomitable, cold and tranquil are the summit of the expression of the theological thought of the time, which followed the period of the theological encyclopaedism of the mid-to-third quarter of the 16th century. Four holy knights guard the entrance to the church. They are stately and graceful while at the same time, with their athletic bodies and their weapons, embodying an uncompromising strength and resoluteness to safeguard the sanctity of the temple. The picturesqueness of the Praying Mother of God, painted beside the altar partition, is sublime and timeless, just as is her prayer for the deliverance of Christianity in the grievous times of the Battle of Kosovo. 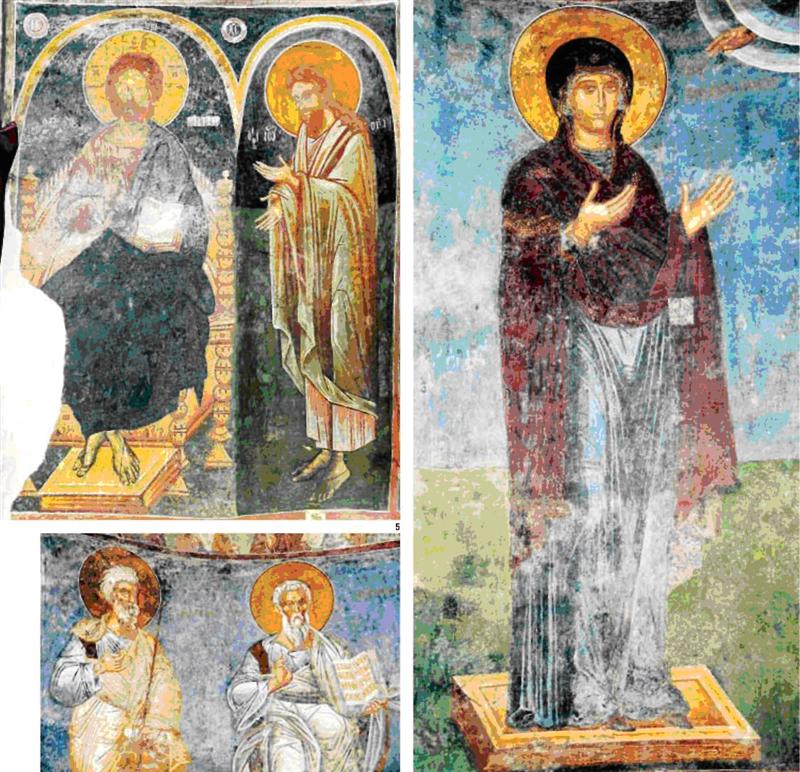 The long inscription that stretches like a band across the entire space testifies that the frescoes in the more recent rectangular and vaulted narthex were painted in 1559/60. The theme that dominated the decoration, now surviving mainly on the east wall, was the most solemn hymn to the Mother of God called the Akathist. The surviving scenes, impressive because of their superior dimensions and harmonious composition, are charged with profound dogmatic reflection arising from the panegyric poetic laudation of the Mother of God in the ode. In the second niche, above the robust half-figure of St. Andrew, is a depiction of the touching legendary scene showing how the death of the Mother of God was augured in the Gethsemane Garden when the olive trees bowed themselves to her majesty. The standing figures of saints in the bottommost zone suggest that the more recent painters chose as their model the earlier painting style employed in the church, which is particularly obvious in the depiction of the interceding/pleading Mother of God in the Deesis. The visual handwriting of the more recent painters, who were undoubtedly talented artists, can be observed in several ensembles of frescoes in the region of Skopje, both in the vicinity and (mainly) on the other side of the city – that is, in the bequests of various laymen on Mount Skopska Crna Gora. 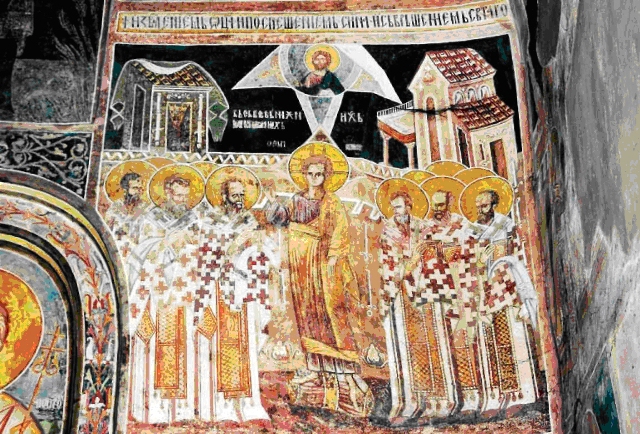 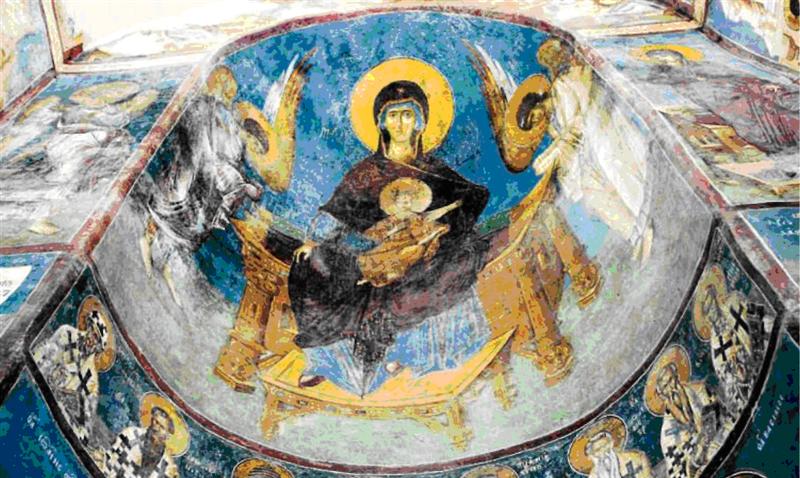 The royal doors of Andreas that once closed the central part of the old iconostasis were the most refined lustre of mediaeval figurai plastic on Macedonian soil. Today, without its colourful decoration, the double door, carved like a wooden sculpture, contains the usual scene of the Annunciation. The elongated and elegant characters tranquilly carry the action of the Annunciation act, in which the solid figure of the serene angel with his wings folded faces the elongated and gentle figure of the Mother of God who is withdrawn in her modesty and meekness. Using minimal means of expression, the artist created a supreme work of applied art, one of the few of its kind in the Balkans collection.