The archaeological complex of “Plaošnik” in Ohrid is the most significant and sacred space for Macedonia and the whole Slavic world in historical, cultural and spiritual sense. It is situated on the higher hill of Ohrid, between Samuil’s fortress and the picturesque area of the church St. John the Theologian of Caneo, on the coast of the Ohrid lake.

The chronological vertical life line spans from prehistoric times (end of Bronze age), over the antiquity and late antiquity period and Early Christianity, to the High Middle ages. The data indicate that towards the end of Bronze age and in Iron age at the area between Samuil’s fortress and Plaošnik, the first settlement on Ohrid hill, existed. This is confirmed with the archaeological investigations (1996, 2007-2009) which unearthed numerous fragments of mat painted ceramics and Iron age tombs with rich offerings of ceramic, bronze and other objects, known in archaeology as “Macedonian Bronzes”. Further on, the data also indicate that in antiquity, in the time of the large development of the aristocratic town of Lychnidos, (the old Ohrid) it was the location of the most significant antiquity temples, among which, also the temple of the god Dionysus. 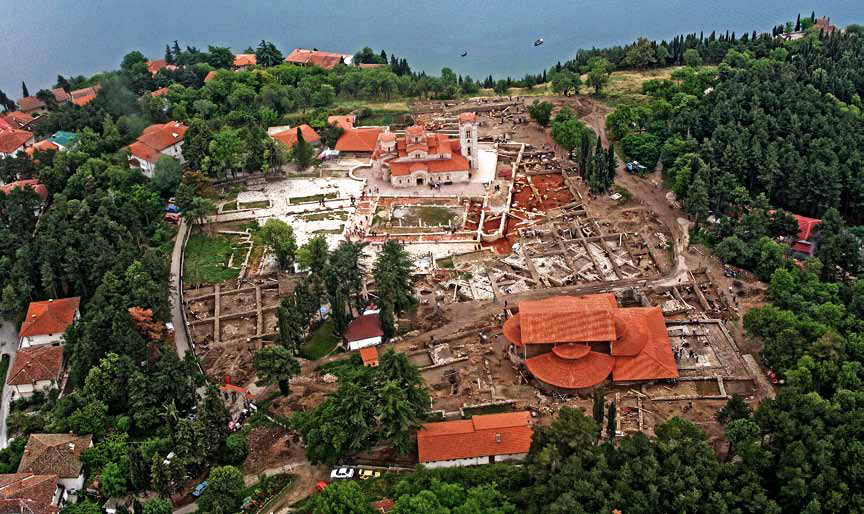 In the late antiquity and Early Christianity (4 – 6 century), lychnidos was the Episcopal center of the Macedonian-Roman province of New Epirus, and Plaošnik was the place where monumental early Christian basilicas with rich architecture and with even richer mosaic floor areas were built on the ruins of the pagan temples. at the end of the 9 century the first Slavic archbishop St. Clement came to these areas, and he reconstructed an old three-foil church (built most probably at the beginning of 7 century) and he dedicated it to the holy doctor St. Panteleimon. Here and in the monastery complex that developed in the next centuries, St. Clement started with a strong educational and literary activity (Ohrid literacy School), the First Slavic University was started, and from there the Old Slavic literacy, art and culture had spread. Even during his lifetime, St. Clement expanded the church towards the west, and he built a modest grave in the pronaos where he was buried after his death in year 916.

The church of St. Clement was later reconstructed and painted with frescoes (13-14/15 century) on the same foundations and it functioned as such until the end of 15 century when it was demolished down to its foundations by the Ottomans, and Sultan Mehmed’s Mosque was built on its place. This building functioned for some time and then it was deserted. In 1942/1943 the first archaeological excavations started here, when the remains of the old St. Clement’s church dedicated to St. Panteleimon and the grave of the holy one were discovered. These discoveries were made by the head of the antiquity Office of Ohrid, Kiril Prličev, the son of the well known poet and romanticist from Ohrid Grigor Prličev, and the work was continued by his successor in the same office, also a man from Ohrid dimče Koco. In the period of 1964-1967 there were additional archeological excavations made and there was a conservation of the remains of the St. Clement’s church made, while the ruined walls of the mosque were fortified in order to “physically protect the church”.

On the occasion of the jubilee of “2000 years of Christianity in Ohrid and Macedonia”, in the period between 1999 and 2002 at the area of the site i.e. at the area with the remains of St.Clement’s church and the mosque, were performed revising and systematic archaeological investigations and onservation/restoration, upon which the Instauration of St. Clement’s church “St. Panteleimon” commenced. The direct work on the reconstruction of St. Clement’s temple started in March 2001, and in the summer of the same year, further systematic archeological research continued in order to provide appropriate conditions for the access to the St. Clement’s church. The remains of the monumental five-nave early Christian basilica around St. Clement’s church were discovered, placed in the central part of this big early Christian sacral facility. The work also continued in 2002 and there was a monumental baptistery discovered south from the apse of the basilica, with preserved mosaic floors and beautiful representations of the symbolic early Christian cosmogony (vegetal and zoomorphic representations, swastika crosses, etc), narthex with preserved parts of mosaic floors in many phases in the northern nave of the basilica; spacious atrium in the northern part with marble bases and pillars, auxiliary rooms and spacious yards in the eastern part of the complex etc. 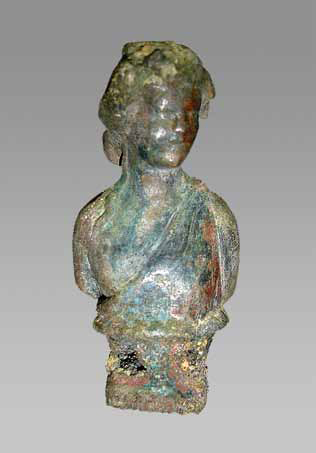 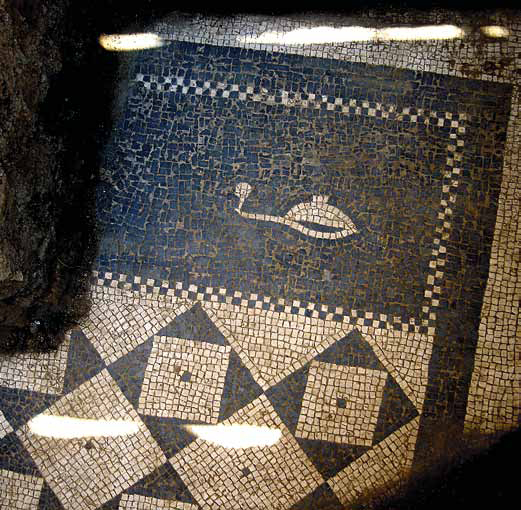 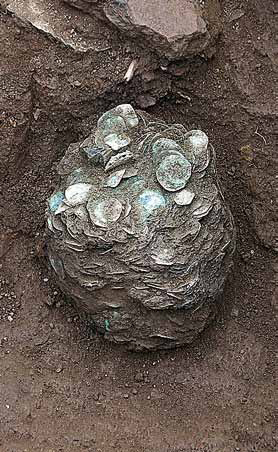 St. Clement’s church of St. Panteleimon was completely reconstructed by the end of July 2002, on the same foundations of St. Clement’s time (9 century) and the additions (chapels, northern and southern porch and church bell (8-14/15 century) with the same construction materials and the same approach to work, as it was done in the old times of its former reconstructions. It is a three-foil church with a naos (central nave), narthex with a gallery, northern porch, southern open porch, dome above the altar area, dome above the central area and a church bell on the western part. In the interior, there is preserved fresco painting from the time of its reconstruction in 11-12, 13-14 century and the remains of older phases of floors that are today presented with floor glass areas. The old floor in the altar area and in the naos (central part) has been reconstructed in marble, based on the remains of the old original floor. There is a marble altar screen and carved gates, iconostasis and the grave of St. Clement. On the walls of the northern porch the discovered fragments of the frescoes of the old church are presented. St. Clement’s temple has received its original shape with its whole historical magnitude and spiritual dimension that reminiscently brings back St. Clement’s time to our modern times,to be reconstructed and last in the future with an eternal faith and respect to the immortal spirit of the holy one. 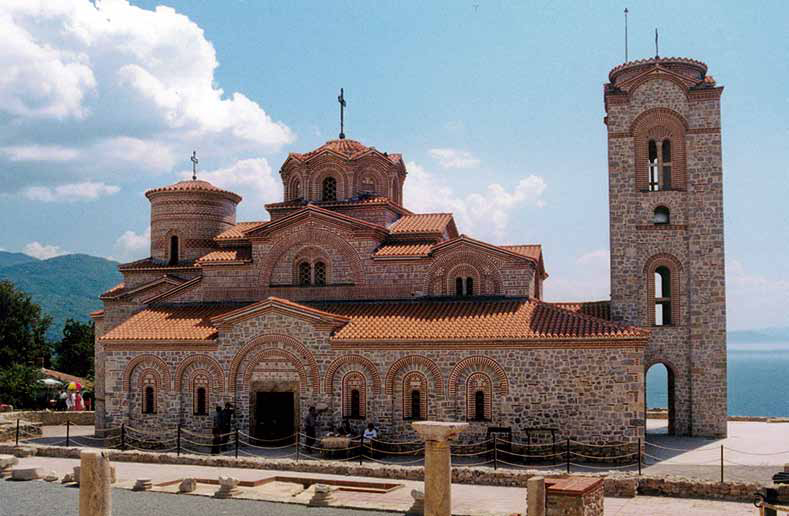 In 2007-2009 were performed vast systematic archaeological investigations on the entire area of Plaošnik with the goal to discover all relevant data that would enable the implementation of another vast project at this area: the Instauration of the complex “St. Clement’s University”.