Prince Marko, whose life fit within the historical context of the time and who has since been exalted to a topos of defiance and heroism, fulfilled the last will and testament of his father, King Volkašin, and in the eight decade of the 14th century completed the stately family bequest dedicated to the martyred warrior St. Demetrius. In the midst of this agreeable and God-pleasing scenery, at the centre of the monastery, rises this domed cross-in-square church with a narthex that has a calotte dome and a tripartite entrance to the naos. The skill of the masons brought about an uncommon and wonderful marriage of the irreconcilable -a marriage between intimacy and spaciousness.

Founded upon liturgical and poetic texts of unique visualness, the depiction of St. Demetrius as mounted on a white horse above the entrance – symbolically accentuated as a great martyr, wonder worker and heroic warrior, with a blessing by the eternal Christ Immanuel – guards the church, the metaphor of faith and of the state. The Holy Liturgy of St. John Chrysostom, involving thirteen figures, unfolds on the walls of the altar space. It is an exceptional symbiosis of the heavenly and earthly liturgy officiated by Christ, the supreme prelate. Owing to its complex semantic nature, this rich ritual ceremony surpasses all previous similar themes in Byzantine monumental art. 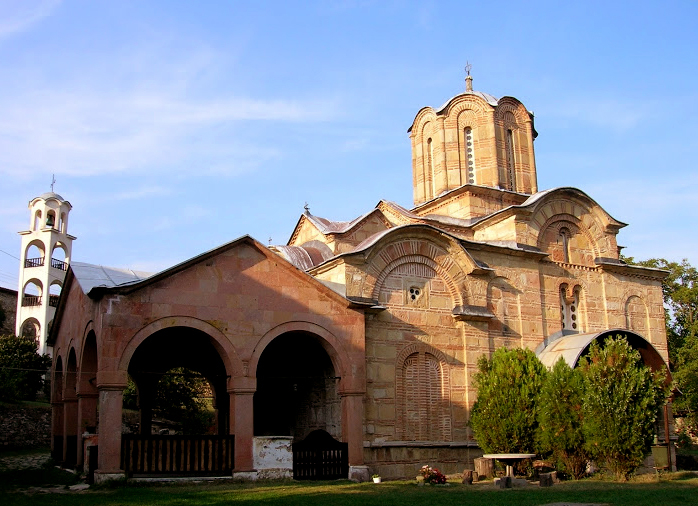 The complex polyphony of messages continues on the north wall of the naos. Lengthwise in the first zone, the great holy warriors, richly arrayed as noblemen, observe the inauguration of Christ as the sovereign of the universe, universal liturgist and supreme judge for whose mercy (fulness) pray the Mother of God and St. John the Baptist. The royal ceremony is also observed by King David, the forefather of the Mother of God and the first to be anointed with the holy chrism, who exalts God as “king and archpriest forever, refuge and strength of the mortals”. By profound design and with great symbolism, the donor’s royal family has been added to the company of saints who bear the features of the most senior ranks of Byzantine nobility, while the ensemble concludes with the depictions of Ss. Constantine and Helena. 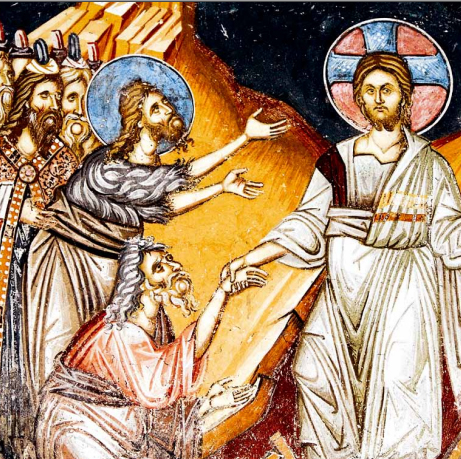 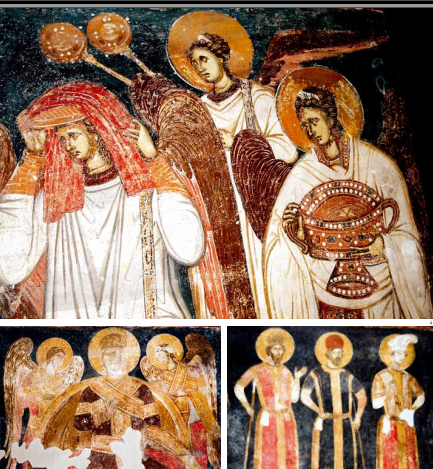 The second zone accommodates the Akathist to the Mother of God. Its final songs, united into a single entity, visualise the ceremony of the liturgical service that took place before the king and the elite courtiers during the Easter Lent when the miraculous icon of the Mother of God Odegetria was brought in. This populous scene with historical grounds has a documentary value. Precisely on the icon of the Mother of God Odegetria, the Christ Child is shown as wearing an earring as an amulet ensuring the issue’s eternity. The

Byzantine models of the events of the Passion also bear the mark of the author’s creative signature. Narrating the gruesome history of Christ’s last days on earth elaborately, the author included rare depictions of Christ’s address to the apostles after the washing of the feet, the savage flagellation, his drinking gall and the raising of the cross. Another feature of significance for the entire Byzantine world are the three scenes illustrating how Christ was brought before Pontius Pilate, based on the narrations of the Evangelists Matthew and John. A garland of flowers whose calyces accommodate busts of holy martyrs arranged in calendar order stands like a metaphorical laurel wreath above the Passion scene. The zone above contains scenes illustrating Christ’s miracles and appearances after the Resurrection, while the uppermost parts accommodate the Feasts cycle. Right next to the Nativity, five scenes depict the tragedy of the slaughter of Bethlehem’s children ordered by King Herod. The drama culminates with Rachel’s painful wailing in comfortless despair. The superior visual expressionism turns this scene into a resonant synaesthetic image of the shriek. The self same expressiveness, deprived of ecstatic gesticulation, is also rendered by a depiction of the Mother of God in a Byzantine variant of a poignant Pieta. 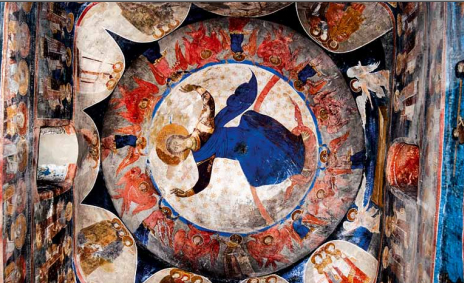 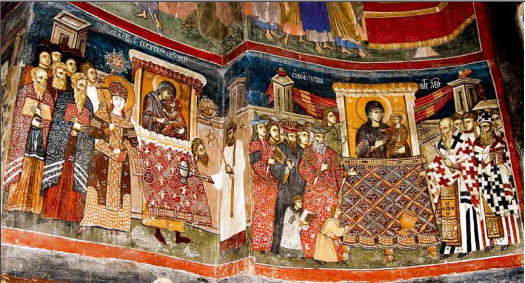 The calotte dome in the narthex contains a unique illustration of the theme based on the hymns of Cosmas of Maiuma. The theme focuses on Christ the Logos who blesses the Heavenly Table accommodating a variety of great saints. The hymn/theme invites the faithful to “delight forever in God’s wisdom in the House of God where the Immortal Table is.” Two hagiographies have been depicted in the narthex – those of St. Demetrius and St. Nicholas. Portraits of King Volkašin and Prince Marko adorn the façade lunette above the south entrance. Prince Marko is shown as holding a horn in his right arm as a crown symbol of his anoinment by God. A visual transliteration of the 88th Psalm has committed the message of the royal lineage as being blessed by God and the legitimacy of their throne to eternal memory.

Having designed only the upper zones, the grand painter of Marko’s Monastery, rightly compared to Theophanes the Greek and student of the famous painter John Theorian, left his imprint on the entire Byzantine art world. By using the religious matrices, he created an outstanding body of murals centred around man and charged with a powerful dramatic expression. The colouring is dark and cold; chestnut and olive colours weave into the blue background. A magical mystic light originating from Christ illuminates the figures, blazes like a lightning upon their faces and flows down their contours. The more recent painters, who painted the lower zone, transformed the emotional volcano of the scenes in the upper zones into an expressionist painting approach, depicting powerful and fascinating images of pondering and wise philosophers. The five royal icons from the original iconostasis – those of the Pantocrator, Mother of God, St. John the Baptist, Archangel Michael and the patron – dated between 1400 and 1405 (now in the Museum of Macedonia), are superior crowning features of this body of mediaeval fine art. Marked similarly with translucent halos that resemble globes of air and with the rich chromatic gamma that contrasts the dark incarnate, the mild faces of these magnificent figures steadily and visibly carry their melancholy. Around 1591 and 1592, a coryphaeus cross was added to the iconostasis, the largest in the so-called Pek woodcarving group, and beautiful royal doors whose woodcarving, in the spirit of the tradition of Slepče, frames the Annunciation scene and its elegant figures with impressive chestnut incarnate. The idea to create a Christian oasis in those bleak days, an oasis to remain for times eternal, has been perfectly achieved. The works created have become monuments to its uninterrupted fruitful existence throughout the centuries and superior Eastern-Christian reverberations in the wealth of European art.