Scupi is one of the largest Roman cities in the Balkans with the status of a colony. It is situated 5 km northwest of Skopje, near Zlokukani, on the southwest slope of Zajčev Rid, left of the site where the river Lepenec flows into the Vardar. Its precise location was identified by Arthur Evans in 1883. Continuity of life on this site has been confirmed from the Bronze and Iron Ages to the 6th century BC. The beginnings of this city are linked with the incursions of the Roman legions in the late 1st century BC and the founding of the province of Moesia in 15 AD . The question concerning its previous status, i.e., whether it was a civilian settlement or a legion camp, remains open. During the Flavian dynasty, probably during the reign of Domitian, in 84/5 it acquired the status of a self-governing deductive colony (Colonia Flavia Scupinorum) with the settling of veterans, mainly those from Legio VII Claudia.

The original settlement was transformed into a complex Roman urban city with all the administrative, civilian and religious facilities and structures which the new conditions and circumstances required. It developed as an important administrative, economic, cultural, religious and transit center of the province Moesia Superior. There is a reference to Stobi in Ptolemy in the 2nd century. During Marcus Aurelius, in 170, the Dacian Costoboci passed through it during their incursions towards Aegea. In 268/69 it was ravaged by the fierce hordes of Goths and Heruls/Eruli. In the late 3rd century it became the metropolis of the newly established province of Dardania, and in the 4th century it experienced once again great economic and urban growth.

In the Tabula Peutingeriana (4th century) it is marked with a vignette as the province capital. During his stay in Stobi in 379 and 388, Emperor Theodosius I issued two imperial edicts. The city was probably not spared during the ravaging incursions of the Huns in 447. Between the 4th and 6th centuries it was an episcopal and metropolitan see. In 518 it was destroyed in a disastrous earthquake recorded in the Chronicle of Marcellinus Comes. After the renewal in the 6th century, urban life eventually ceased towards the end of the century, during Mauricius (582/3). It survived as a small rural settlement until the 10th and 11th centuries. Its urban features, the infrastructure and the high level of communal living (water supply, drainage system, developed street grid with paved streets, public baths, floor heating, floor mosaics, decorated walls, paned windows) place Stobi at the highest civilizational scale among the Roman provincial cities.

The surrounding walls are in the form of an irregular rectangle (738 x 590 m), covering a surface of 43 hectares. The city plan has an orthogonal design. The streets, pavedwith massive stone slabs, run parallel with the rampart walls (SW/NE /NW/SE) and intersect at a right angle. The pavements are separated with curbs and are covered with porticos. Under and by the streets there is a sewage system for waste water, as well as a complex grid of clay and lead pipes for the supply of clear water. Throughout its historical development, the city preserved its basic urban plan, with the same orientation of the building complexes and other structures, despite the fact that the dimensions and purpose of the city quarters changed in different periods. In terms of its urban design, judging from the scope of its exploration, these urban features are especially characteristic of the Late Antique Period (late 3rd and the 4th centuries). 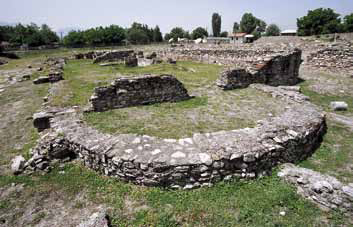 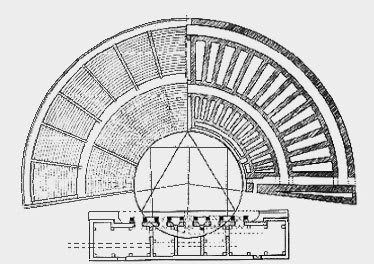 Several building complexes and structures have been completely or partially explored: the theater (a grandiose structure with the unearthed contours of the skena, the theater building and the auditorium, with luxuriousarchitectural marble decoration) which belongs to the Roman type of theaters  built during Hadrian in the 2nd century; a horeum (a large-size public building which served as a warehouse, built between the late 3rd and early 4th centuries); a city villa/domus (a private house with walls resplendently decorated with frescoes and private floor heating, built between the 3rd and 4th centuries); a civilian basilica (a representative and monumental public building with lavish architectural marble decoration and a mosaic floor, built in the 4th century); a city bath (a public building with floor heating and sections for hot and cold baths, built in the period between the 4th and 5th c enturies); a three-nave Early Christian basilica with a baptistery on the south side, dating from the period between the 5th and 6th centuries); a small housing complex (private houses from the 6th century); several structures of unidentified purpose and part of the street grid ( the cardo maximus, a crossroads with two decumani, another cardo and a decumanus from the period between 4th and 6th centuries).

The necropolises and other auxiliary buildings are outside the city walls. pproximately 1,000 graves from the southeast and northwest necropolises have been explored, which date from the period between the 1st and the 4th centuries, as well as parts of the Antique bridge across the river Vardar, a private villa and a Christian basilica in the village of Bardovci.