Sometimes it pays to take a second look.

Archaeologists from two United Kingdom universities examining declassified spy photos rediscovered part of a what they believe is a series of Roman fortifications dating back to the 2nd century A.D.

Although parts of the ruins had once been known to 19th-century researchers, they were subsequently misidentified, dismissed and largely forgotten, according to Bill Hanson, a professor of Roman archaeology at the University of Glasgow. In some areas the structures were heavily damaged by ploughing or construction — even to the point of complete destruction.

“If you look at any modern book on Roman frontiers, you will find no mention of [these fortifications],” Hanson told The Huffington Post. “[They have] kind of disappeared from consciousness.”

While the ruins may have lost their significance, many hundreds of years ago they were an impressive monument to the power of the Roman Empire. The entire structure ran about 37 miles across modern-day Romania from the Danube River to the Black Sea. In some parts, the system of walls and forts may have once stood 28 feet wide and more than 11 feet high, according to the researchers’ best guesses.

Heavily patrolled by Roman soldiers, Hanson told HuffPost that this “easternmost linear barrier of the Roman territory” would have been “without a doubt the most densely garrisoned linear barrier anywhere in the Roman empire.” While dating the ruins is inexact without the results of formal excavation or carbon dating, Hanson added that he believes construction most likely began in the 2nd century A.D.

Dr. Ioana Oltean, a senior archaeology lecturer at the University of Exeter, told The Huffington Post in an email that she began the project as a way to systematically map any and all archaeology visible from the air and from satellites and “to use this data to understand the impact of the Roman conquest on indigenous landscape and communities.”

“I was particularly keen to consult early photographs pre-dating modern development,” Oltean told HuffPost. “I knew that the landscape in that region had undergone significant development during the communist regime and this development could have wiped out some archaeological sites without them being necessarily mapped or properly investigated.”

Oltean and Hanson therefore set out to reassess the area, relying heavily on photographs to guide them where erosion or development had obscured traces of the ancient barrier.

A release from the University of Glasgow notes that the researchers were tapping in to a vast archive of declassified aerial pictures taken during World Wars I and II, as well as declassified images made by American spy satellites during the Cold War. In the case of the Roman fortifications, Oltean told HuffPost that digitized copies of aerial photographs made on May 31, 1944, were particularly useful in pointing out never-before catalogued forts along the route.

Oltean says the discovery is interesting because of what it can tell researchers about the Roman conquest of the region, which is proving “far more elaborate than previously thought.”

“This new stretch of wall indicates that the area has [sic] been far more militarized and carefully controlled during the Roman period than was previously appreciated,” she explained. “This calls for a new analysis of Roman defensive strategy in the area of the Lower Danube. … Another important outcome is that these monuments highlight just how long afterwards ancient monuments and installations could have been in use over the following centuries and how much were these adapted to specific needs of those times.”

This project also confirms the potential of aerial archaeology, a technique that has been used by researchers for some time, but has been enhanced recently by tools such as satellite photos and Google Maps. Hanson and Oltean have already published a book on the topic, called Archaeology from Historical Aerial and Satellite Archives, and Oltean said she plans to continue her research “[unraveling] more mysteries of the archaeological landscapes of the Roman Empire in areas where such research methods have not been yet applied.” 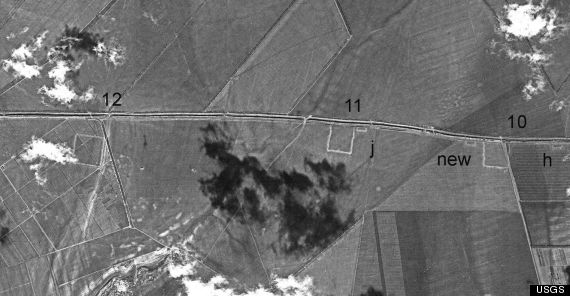