Midway up the mountain road on the slopes of Mount Vodno, where the mountain affords the finest prospect of Skopje, is where St. Panteleimon’s Church stands, built as a cross-in-square with five domes and a narthex. One does not perceive its harmonious and polychromatic exterior as an expression of imperial power but rather as an intimate and familial pledge of piety.

The inscription above the door leading to the naos reads that the church was erected and painted in 1164. Its donor, Prince Alexius Comnenus, was son of the nobleman Constantine Angel and Theodora, daughter of the Byzantine emperor Alexius, the founder of the Comnenus dynasty. Sources indicate that precisely the Angels had estates in the vicinity of Skopje and that the young prince, Emperor Manuel Comnenos’s favourite companion, governed the city. The prince donor commissioned a prominent painter who marked the epoch and rose above anonymity by virtue of his superior work, thus becoming permanently remembered in history of painting as the “Master of Nerezi”. 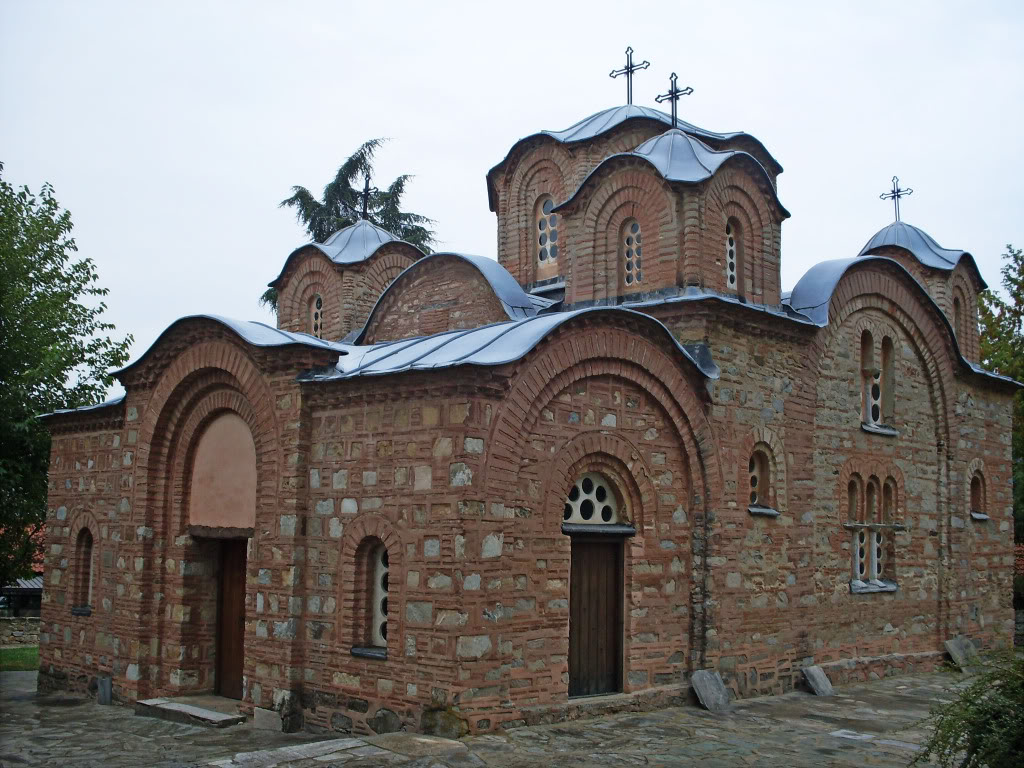 In the altar space and the naos of the church only the frescoes in the bottommost two zones have survived; on the other hand, the entire 12th century fresco material has been preserved in the dome areas at the corners of the naos. The compartments at the crowns of the domes contain four different depictions of Christ’s aspect, while the walls are covered with individual representations of saints. The altar space is conventionally dedicated to themes depicting liturgy. The iconography in the scene of The Liturgy of the Holy Archpriests is one of the three of its kind in Byzantine painting depicting all the prelates in worship before the Hetoimasia (the Prepared Throne), reflecting the decades-long synodal debate to devise the depiction of the liturgy. The higher zones of the naos contain scenes from the lives of Christ and the Mother of God. In line with the principles of the metropolitan art during Comnenus times, which prescribed that the mural should be “balanced”, not burdened with numerous figures, and that the height of the figures should be natural, the scenes have monumental dimensions and spread across the entire wall. Premier in many respects, the Lamentation of Christ has been included among the illustrations in nuerous textbooks on world history of art. For the first time this scene appears in a circular section rather than a rectangular one. Here, for the first time, the angels weep. For the first and last time the Mother of God, grief-stricken, straddles Christ’s dead body. The solemn and sublime sorrow for dead Christ-God depicted in the earlier identical scenes now assumes the appearance of a definite parting with Christ-Man, the only son, eternalising the lamentation, the tears and the despair. For the first time the Lamentation is a picture of death equating the end of the mortal man’s suffering with the end of the suffering of the immortal god.

The first zone contains twenty-six figures of saints with individual physiognomies. The noble patron, the wonderworking saint Panteleimon, whose face is subtle to the point of feminineness and whose figure is delicate and long, dominates the naos and is bordered with a frame of stucco lacework whose motifs eventually found theirway into the famous Macedonian 19th century wood-carving. The patron appears by the authentic marble altar screen, which has been ranked among the finest and most magnificent examples of Byzantine stone sculpturing. Rare representations of the patron’s life appear on the walls of the narthex. The scenes testify to his miraculous healing powers. The earthquake of 1555 collapsed the upper parts of the church and the main dome. They were restored in the late middle ages. It was then that the dome, the upper walls and the vaults were fresco painted, starting with the busts of saints in the medallions, which also include the images of the holy hermits form the Balkans – Prochorus of Pčinja, Gabriel of Lesnovo, and John of Rila. The elegant figure of the Pantocrator is surrounded by the Divine Liturgy, while the eight prophets in the drum of the dome, through the texts of their scrolls, prefigure and laud the Saviour. 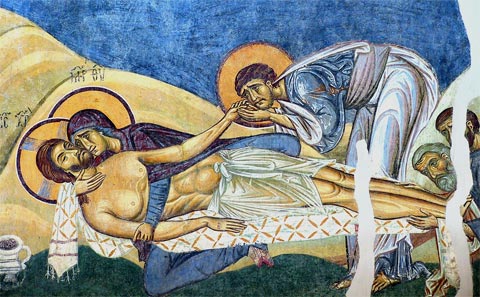 The events of Christ’s Feasts and Passion are the only thematic selection dating from the more recent painting period and include the rare scene of Christ’s capture following Judas’s betrayal. The multitude of figures in the small scenes, the architectural backdrops that appear as inevitable stage designs, the pale colouring of some scenes that strike one as having been left unfinished, as well as the pastel tones of the warm colours, are the key features of the more recent painting approach. On the east wall of the narthex, by the door, the image of Archangel Michael appears in all the magnificence of his figure, array and aspect. Dated to the second half of the 16th century, this fresco has been ranked high in the post-Byzantine painting corpus of the Balkans by the academic circles. That the monastery thrived and lived a full-blooded life in the post-Byzantine period is also evident from the wondrous wood-carved royal doors that were brought to Nerezi, probably in the mid 16th century, from Ohrid, where academic authorities believe they had been made. The impressive figure of St. Mercurius, placed in a prophylactic position on the great icon originating from Nerezi, now exhibited in the Museum of Macedonia, is the work of an anonymous master who worked in the region of Skopje in the third quarter of the 16th century and whose singularity arises from the fact that he subtly incorporated western iconographie elements into traditional painting. The last witnesses to the continuity of the activities until the new age are the five royal icons, now exhibited in the Museum of Macedonia, that can be attributed to the painter Damjan of Kruševo, whose prolific artistic work can be traced back to the period between the 1840s and 1880s. Judging by the number of his works, he was the chief rival of the fresco painter Dičo Zograf in the region of Skopje, and Damjan’s representative icons from Nerezi reflect the highlight of his painting maturity.