The inscription across the length of the central nave of this three-aisle church of St. Nicholas in the picturesque village of Manastir in Mariovo tells that the church was built upon the foundations of an older one, dating back to the 11th century and that its new donor was Acacius, the monastery’s abbot. It was fresco-painted in 1271 under the supervision of the deacon and referendary named John. Three painters worked on the paintings in this church and each of them had a different creative sensibility. This very painting ensemble is an illustrative indicator of the 13th century stylistic pluralism. All the three painters were great connoisseurs of the traditional programmatic and iconographie patterns, which enabled them to skilfully and eruditely develop them. 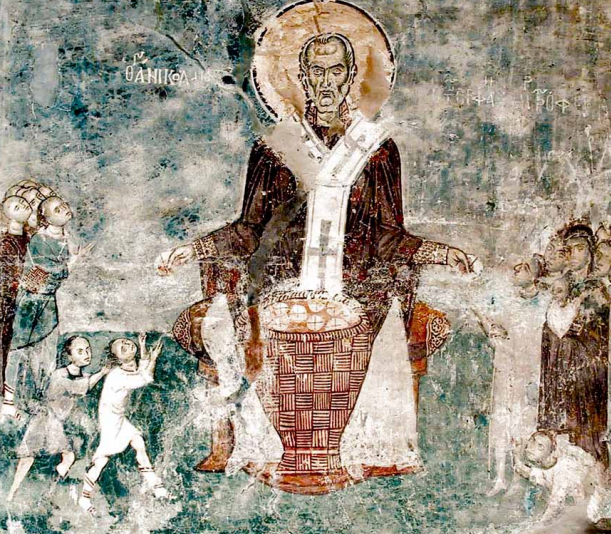 The standard representation of the Communion has been refreshed/revived with the episode in which the apostles Bartholomew and Simon embrace each other before the Communion with the wine – a rare detail in Byzantine painting. The scenes from the life of Christ have been illustrated in the central nave, whereas the south nave contains scenes from the life of the patron, St. Nicholas, programmatically accompanied by the Ladder of John Climacus and the Tree of Jesse. The Genealogy of Christ has been accurately dated and is the earliest painting on this subject in Byzantine monumental painting. The representation of the progenitor Jesse is at the root of the genealogical tree, while Christ’s ancestors are on its branches. The iconography of Abraham from the Old Testament, which is contextually linked with the Lineage, is rather unusual as he holds in his hands two medallions with the images of his son Isaac and his daughter-in-law Rebecca, the wife of Isaac. 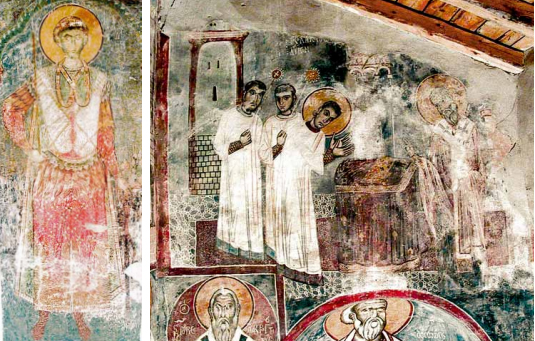 The north nave accommodates the donor’s composition showing the donor Acacius with the model of the church and St. Nicholas, as well as the scene of the Last Judgment In aesthetic and stylistic terms, the art in this church oscillates between the clerical style of the 11th century and the plastic style of the 13th century. However, its fundamental qualities rest in the artistic instances dominated by the Comnenian graphicism. The line is controlled and meticulously builds up the volume of the figures whose faces have arched eyebrows, low foreheads and ornamented curly hair painted with geometrical precision. Despite the dominant graphicism, the artist who painted the saints in the central nave reaches for the plastic fullness of the form, building the volume of the stout and powerful bodies of the holy warriors. 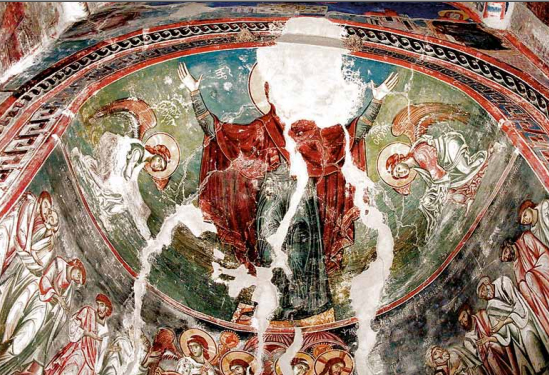