The Kurshumli inn is one of the largest and, without doubt, the most resplendent ottoman inns, and not only in Skopje. it stands in the old Bazaar in Skopje, more precisely, in the former hardware store district of the Bazaar. it represents the highest achievement of ottoman monumental public architecture in Macedonia. Although the inscription with the year of its building does not survive, the facts about the inn, with its precise location come from the waqfname of its builder, Muslihudin Abdul Gani, also known as Muezzin Hodza al-ma’dini, legalized in H.956/M1549-50. Thus, it can be claimed with certainty that the Kurshumli inn was built in the first half of the 16th century, the classical period of ottoman building. The inn, which was known as the inn of Muezzin Hodza got its present-day name kurshumli in the 19th century, after the lead roof with which it was covered. 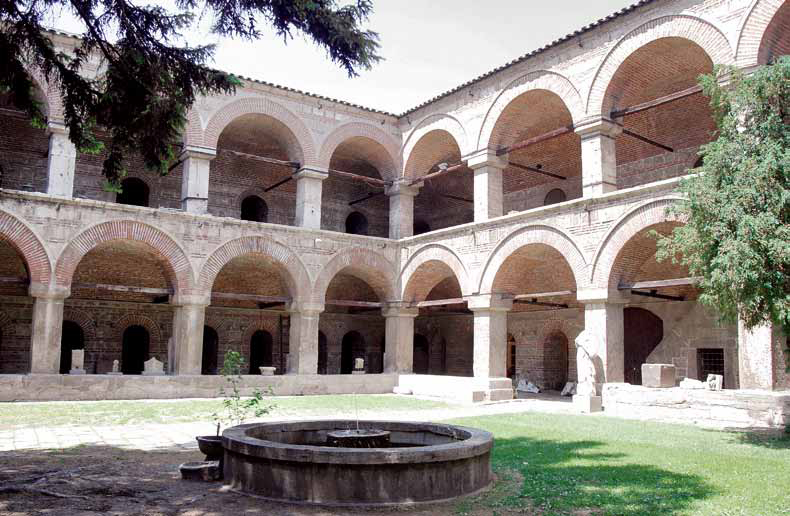 There are certain assumptions that it was built by the merchants from Dubrovnik who needed it for their colony in Skopje and that it housed their workshops and warehouses. This confirms the significance that the inn had for the commercial life of the city. During its existence, the inn was used for various purposes and its function changed a number of times. First it was used as an inn, until 1787, when it was transformed into a vilayet prison. From 1904 to 1912 it served once again as an inn, while after World War I it was used as a weapon depot; later, it served as a lapidarium of the Museum of South Serbia, and since 1955 it has been used as a lapidarium of the archaeological Museum of Macedonia which stands in its immediate vicinity. During the summer, the Kurshumli inn is the site of numerous cultural events. In terms of its architectural concept, it does not differ from the other inns and caravanserais that the Ottoman Empire built in all urban centres. 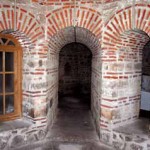 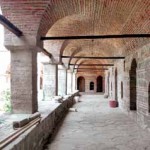 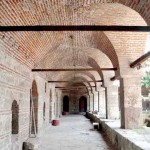 The inn is a massive structure with a square ground plan, with an open courtyard, a shadrvan and a beautifully crafted fountain in its centre, surrounded with a wide two-storey porch. The numerous square stone columns on the ground floor and the porch storey spanned with arches create an intimate atmosphere, together with the courtyard and the shadrvan. There is a total of sixty rooms, twenty-eight on the ground floor and thirty-two on the upper floor. The ground floor rooms served as storage spaces, while the rooms on the upper floor served for rest and overnight stay, each of them with a mantelpiece/fireplace. The decoratively built walls made of high-quality chiselled alternating rectangular stone and brick, as well as the numerous small pyramid-shaped domes which were once covered with led (kurshum) are also a remarkable and impressive feature of the Kurshumli inn. The lead which gave the inn its name was removed after World Word iand used for military purposes, and the inn was covered with tiles. The main entrance to the inn, with a projecting porch and a dome-shaped roof above it (the quarters of the inn keeper) is on the south side, i.e., the side of the old Bazaar. This part had a separate entrance on the east side. The inn suffered heavy damage in the earthquake of 1963, after which it was completely renovated. the unique feature which distinguishes it from the other inns, in terms of its architectural concept, is the position of the stable and the subsidiary rooms in a separate yard on the north side, which was connected with the rest of the building with a separate entrance on the east side.