Situated about 30 km from the town of Debar, hovering over the rapids of the river Radika, the monastery dedicated to St. John the Forerunner, also known as the Bigor Monastery, built with the rock hewn from the travertine cliffs of Mt. Bistra, is one of the most impressive structures and the centre of an almost nine hundred years-long monastic life. Since 1020, when, as the legend has it, it was founded, until its large-scale renewal in the early 19th century and to the present day, it has hidden traces of its rich history. Today, we are reminded of this rich heritage with the miraculous icon of this temple’s patron dating from the17th century, the earliest surviving relic from the katholikon and the three royal icons and the Great Cross from the former iconostasis, works of the gifted descendants of Onuphrius, the renowned icon painter of the 16th century.

Today, they are the exclusive exhibits of the monastery’s treasury situated in the former women’s refectory. After the monastery was burned down, almost two centuries elapsed before the emergence of the first information about its renewal with the arrival of hegoumen Hilarion in 1743 who, finding a small and derelict church, had it decorated with wall painting and a new iconostasis, built residential quarters and developed its property by buying land in the nearby region of Debar rich in vineyards. During the construction of the large monastery katholikon in 1800 and including into the overall architectural structure on the south side the remnants of the walls of the earlier temple, hegoumen Mitrophanus made possible the preservation of a rare painted ensemble from the last decades of the 18th century. The painters who painted it and who, in the last decades of the 18th century and the early 19th century intensively worked in Ohrid and other places in western Macedonia, also painted icons, mostly intended for monks’ cells, which survive and today are among the exhibits of the monastery’s collection. The only Mitrophanus. In addition to the customary procession of the Divine Liturgy and the half-length figure of Christ Pantocrator, it also includes the scenes from the two Christological cycles, The Great Feasts and Christ’s Passion and Suffering, characteristic of the programmers on the monumental domes of a later date. 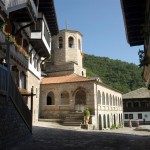 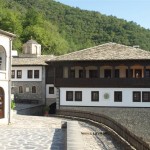 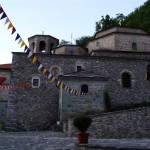 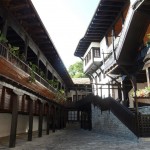 The monastery experienced its greatest prosperity during the hegoumen and archimandrite Arsenius (1807-1838), when it acquired its present, well-known features, which include two monastery wings; on the east side, it is the three-storied “Upper Palace” (1814) in which the monks’ cells are situated and,on the west side, the two-storied monastery refectories (1820-1825). These two wings are connected with guest rooms whose wood-carving decoration was financially supported by the people from the town of Debar and the village of Selce from the region of Mala Reka, and with detached buildings for the storage of supplies needed for the monks and guests. In order to secure the monastery from the permanent attacks of bandits, Arsenius built the Seimen Tower and the southwest entrance wing, whose form changed in the fire of 1916 and which was restored in 2005/6, thus giving the monastery complex its former appearance linked with its east part.

The most impressive artwork created during Arsenius and immediately before his death are the carved iconostasis and the painted decoration in the male refectory. The renowned Mijak’ guild of wood-carvers led by Petre Filipovič – Garkata and Makarius Frčkoski frmo Galičnik finished the work on the monumental three-row iconostasis in 1835, and the episcopal and hegoumen thrones. The deep carving of floral and geometric motifs and human figures with ethnological features in the Biblical scenes, as well as the portraits of the artists themselves carved in wood, are the characteristic features of the original creative output of the Mijak wood-carvers that includes a number of major works of art which include, in addition to those from the Monastery of Bigor, the iconostases in the monastery church of the Monastery of Lesnovo (1814), the Church of the Holy Saviour in Skopje (1824) and the Church of St. George in Prizren (1829). The wall painting in the male refectory is the work of the painters from Samarin, the father and the son Michael and Demetrius (whose monastic name was Daniil) and dates form 1830s; the depictions of monks which are of a later date were painted by the famous painter Dičo Krstevič from the nearby village of Tresonče and represent a unique example of a painted ensemble in the Balkans from this period. Consistent in the nurturing of the tradition from Mt. Athos in the thematic organization of the programme, the painters from Samarina have depicted, in addition to the dominant figures of the contemporaries, Hegoumen Arsenius and Gregorius, Metropolitan of Bitola (Pelagonia), an impressive gallery of monks’ portraits of ecumenical importance. 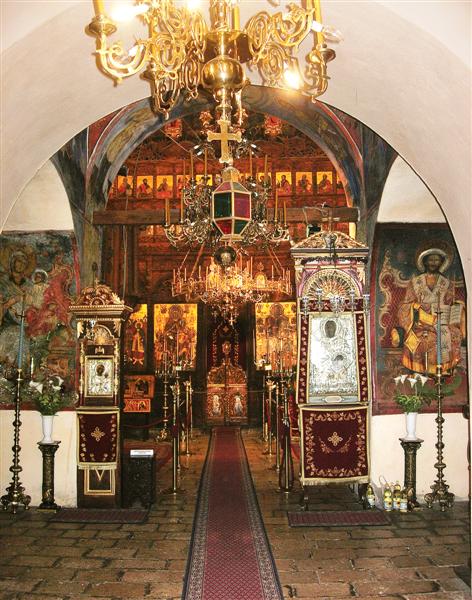 At the same time, they replicated the customary altar, i.e., liturgical and Eucharistie repertory in the apsidal space of the refectory, refreshing it with iconographie elements that are of western provenance, among which the most specific is the depiction of the (Winged) Holy Mother of God the Empress of Heaven as an interpretation of the hymn “It’s Truly Meet to Call Thee Blessed”, as well as the Eucharistie scene, Christ Feeding the Multitude, i.e., Christ feeding 5,000 people with five loaves and two fish. This scene is obviously adequate for the space intended for taking meals. A selection of scenes was also made from Christ’s life (Nativity and Resurrection) and the church patron St. John the Forerunner (Nativity).The painting found here, together with the rich interpretation of the contents of the iconostasis icons in the katholikon of the Monastery, as well as the numerous individual and jointly done works from the monastery painting workshop, is the most expressive example of the brilliant breakthrough of the so-called Levantine Baroque in Macedonia – rich in a plush colour scheme, monumental in expression, decorative in the approach and dramatic in the dynamism of the scenes. 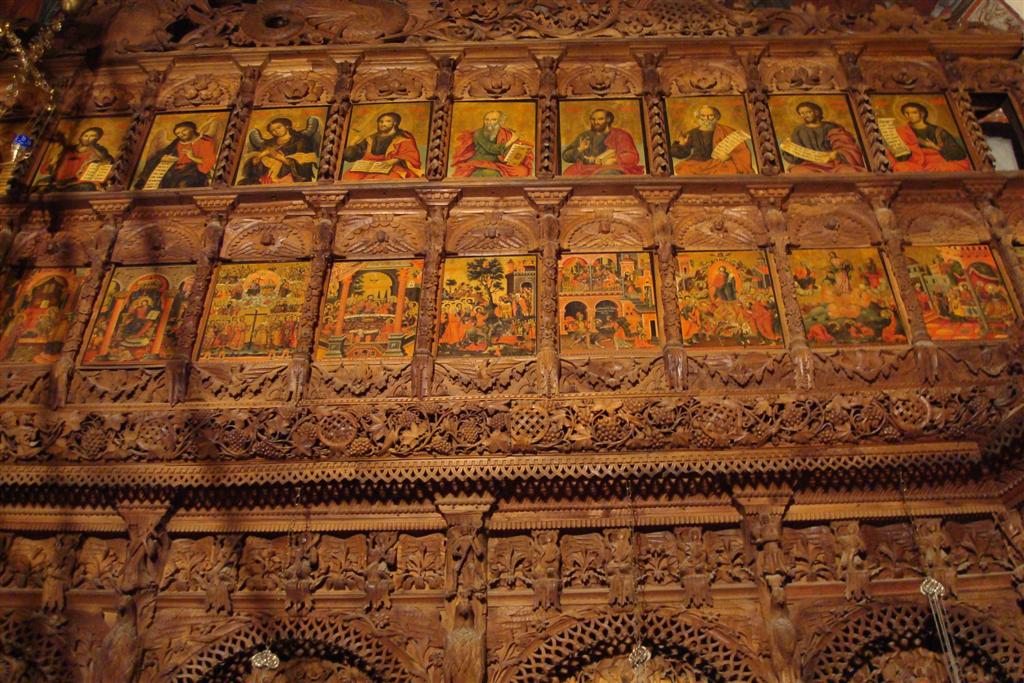 The later portraits of monks in the refectory painted by Dičo Zograf (the Painter), scenes from the life of St. John the Forerunner/John the Baptist painted by an unknown painter on the western dome of the katholikon and the decoration on the western façade, painted by Vasilij Ginovski from Galičnik in 1871 with scenes of the Last Judgment, Creation of the World and the lives of Adam and Eve, as well as the gallery of portraits of Balkan saints, which includes the especially venerated Ohrid saints Clement and Naum and the first Slavonic educators Cyril and Methodius, are works of great historical and documentary value, a testimony to the veneration of those who participated in the creation of the monastic life in this spiritual shrine and who hold an important place in Southern Slavonic ecclesiastical and cultural history.

You can book a tour, or you can contact us in the following ways: