Home Can Privatization Save the Treasures of Ancient Greece? Greece Ancient Stadium 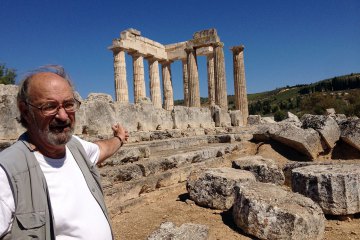 Stephen Miller, professor emeritus of classical archaeology at the University of California, Berkeley, stands in front of the Temple of Neamean Zeus in southern Greece, Wednesday Sept. 25, 2013. Miller, who led excavations at the site starting in the 1970s, says it is in danger of closing to the public due to ongoing state staff cuts in crisis-hit Greece and failure by authorities to find alternative sources of funding. Nemea was one of the main sites of ancient Greek games, along with Olympia, Delphi and Isthmia. Miller led the modern revival of the Nemean Games, held at the site every four years since 1996. (AP Photo/Derek Gatopoulos)