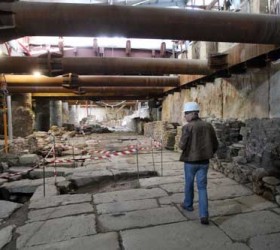 on Jan 26, 14 • by Haemus • with Comments Off on Construction of Thessaloniki’s metro system has revealed wealth of archaeological finds


The Thessaloniki metro system aspires to be the “most modern metro system in the whole of Europe.” That, however, is contingent upon its completion. Begun in 2006, the project is currently four years behind...
Pin It

The Thessaloniki metro system aspires to be the “most modern metro system in the whole of Europe.” That, however, is contingent upon its completion. Begun in 2006, the project is currently four years behind schedule. In order to see the light of day, Thessaloniki’s archaeologists have had to chip away at the city’s shadowy past.

Works on two intra muros stations, Aghia Sofia and Venizelou, have unearthed sections of the city’s Decomanus Maximus, the east-west boulevard that ran through Thessaloniki and most other cities of the Roman Empire. Excavations of this avenue – the medieval “Boulevard of the Byzantines” – have concentrated on a vast complex of fountains and colonnaded walkways. The late antique road was initially of marble construction; by the 6th century CE it had been repaved with rectangular stone slabs. Digging at the site of the adjacent Venizelou station has revealed a square of marble construction flanked by workshops and bazaar-style stalls. These ruins are nestled quietly beneath the bustling Odos Egnatia, a street that takes its name from the famous legionnaire highway that ran through northern Greece in antiquity. 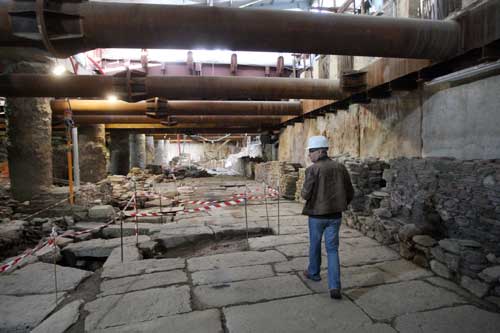 Rescue excavations during construction of Thessaloniki’s metro network have revealed significant evidence of the city’s urban life from the 4th to 9th centuries.

Metro construction extra muros – beyond the formal limits of the ancient city – have provided rare glimpses of early Christian building practice. In the east, at the construction site for Sintrivani station, a late antique church has been uncovered that stands atop a pre-Christian religious structure; its mosaic flooring depicts the mythical bird Phoenix. In the western part of the city, at the site of the future Plateia Dimokratias station, archaeologists have revealed an arched, rectangular late antique church flanked by scattered graves. Burial practice suggests that the cemetery was in use until the 15th-century Ottoman sack of the city; following that conquest, these suburbs developed into commercial neighborhoods.

Thessaloniki’s difficulties are not unlike those that confronted Athens during the construction of its metro system: meeting modern commuter needs while responsibly tending to historical finds. Engineers in Athens anticipated the discovery of entire ancient neighborhoods; they were equipped to excavate them efficiently and to incorporate ruins into their respective station designs. But much of what’s been unearthed in Thessaloniki has come as a surprise to engineer and archaeologist alike. The discoveries speak to the city’s emergence in late antiquity as a cultural hub and – like Constantinople – a strategic bloodline between the Eastern and Western halves of the Roman Empire.

Tensions between Thessaloniki archaeologists and Attiko Metro, the company which is overseeing work to build the subway system, have marked the near-decade since construction began. In August, the two sides reached a compromise that calls for the temporary removal of ruins in order to allow construction to proceed unimpeded. If the deal holds, it will enable the preservation of 80 percent of discovered artifacts. “It is natural for contractors to always try to complete their constructions in the most economical way,” notes Thessaloniki archaeologist Despina Makropoulou. “What is of utmost importance is that the state defends its interest by giving culture the lead it deserves.”