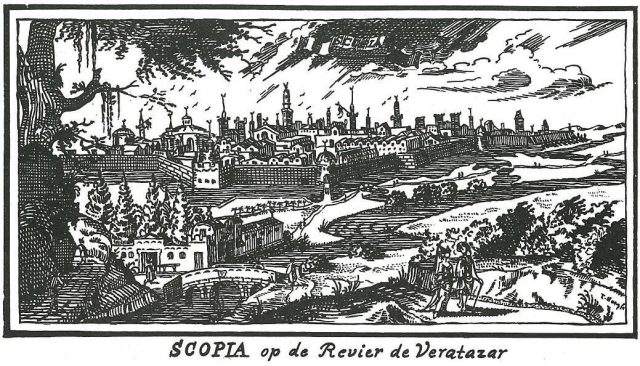 On 01.11.2020 at 10 am, HAEMUS will organize the educational interpretive tour “The Great Fire in Skopje during the Plague”. You can go back in time and walk with us through the buildings that survived the event that occurred on October 26, 1689 in Skopje. Through the prism of several phenomena, we will tell the story of people’s lives at the time when the plague was raging around, as well as the fire that changed the face of Skopje in just one day. This tour, which includes interpretations of people and events from the past, includes also direct interaction with visitors. By presenting most of the reasons that led to the burning of Skopje, visitors will have the opportunity to make separate reconstructions of some events themselves.

From the hillsides of the Vodno mountain, General Picolomini observed on the blaze:

“I decided, although it was not easy, to burn the town into ashes. I am sorry for the houses such as I have not seen at all in this war. The mosques are from the highest quality marble and porphyry, decorated with thousands of lamps on golden plated holders, which one would devote equal attention even in Rome. I feel sorry for the nice antiquities, gardens and pleasure grounds. All this I give to the flames so as not to leave the enemy anything he could put to use.”

The Austrian General Enea Silvio Piccolomini (ca.1640-1689), an Italian nobleman with his root in Siena in Italy, led a campaign against the Ottomans in Kosovo, Bosnia, and Macedonia. During the offensive, the city of Skopje, (present-day capital of the Republic of Macedonia), was plagued by epidemics of cholera. Officially, General Piccolomini ordered the city to be burned due to an inability of his forces to occupy and govern a city so far from his headquarters in Vienna. Another “unofficial” reason for his decision probably was cholera epidemic that was raging in Skopje. The city was destroyed, the population declined, and it lost its regional importance as a trading center.

We are going to take a walk through some of the structures, such as the Skopje Fortress, the Museum of the Old Bazaar, the Holy Savior church, the Ancient Jewish quarter and the Stone Bridge to tell the story about “The Great Fire of Skopje during the Plague in 1689”.

📅 01.11.2020 (Sunday)
🕛 Duration – 2 hours
🗨 : Macedonian
👥 Group size – Up to 12 people
💻: Maps, historical documents and old photographs and postcards
Guide: Vasilka Dimitrovska, M.Sc. in Archeology, Director of HAEMUS and Professional Tourist Guide
Organizer: HAEMUS – Center for Scientific Research and Promotion of Culture – Skopje
* This educational tour is organized under the motto of UNESCO for Open Educational Resources (OER)
* The event is in cooperation with the City of Skopje