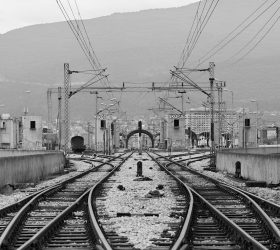 on Mar 24, 20 • by Haemus • with Comments Off on The cultural landscapes of one post-socialist city – Video from HAEMUS public debate


On 22.11.2019 at 07:00 pm, HAEMUS in partnership with Forum Ziviler Friedensdienst – Macedonia Program organized an event entitled “Let’s Invest in Futurism:...
Pin It

On 22.11.2019 at 07:00 pm, HAEMUS in partnership with Forum Ziviler Friedensdienst – Macedonia Program organized an event entitled “Let’s Invest in Futurism: The cultural landscapes of one post-socialist city” at Kino Kultura in Skopje.

After the catastrophic earthquake from 1963, Skopje was envisioned and afterward built as an example of a modern, futuristic, socialist – utopian, Yugoslavian city. The remains of this vision and this Skopje are still visible in the material and intangible culture of the city. In many of the post-socialist countries, there are debates about the architecture and the symbolism of this cultural heritage, but also its potential. In Skopje, the socialist cultural heritage is often ignored, as opposed to the newly created cultural heritage.

This event addressed the following questions: How the post-earthquake and socialist Skopje and its cultural heritage are defined in the public and professional discourse? Is the knowledge invested in this heritage? Are we working on socially acceptable and positive means for dealing with this cultural heritage in a way that will not be grossly ignored and completely erased from the public space? What are the reasons for the (dis)interest of the socialist, tangible and intangible cultural heritage and its monumental art? What is the cultural, economics and social potential of this past and how does it fit in today’s urban plans and the contemporary space design?

The event was a part of HAEMUS project “Radio Skopje speaking“.