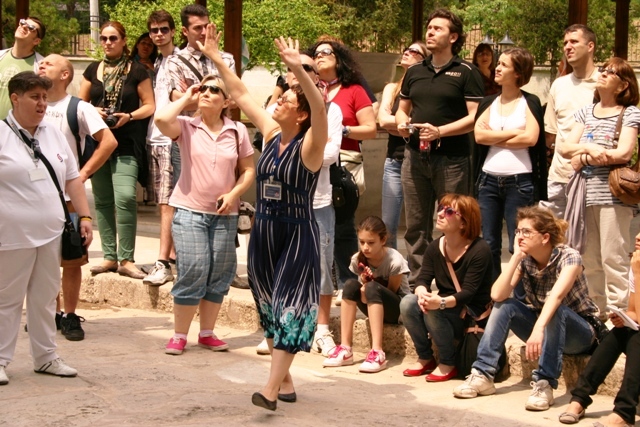 When you see a group of around fifty people, who are listening to the tourist guide with great interest while they are vigorously taking photos, you will probably think that they are some foreign tourist that have decided to visit Skopje. But, still it wasn’t like that in our case. We were the strangers in our own city.

One day in May, the team of Balkon 3 took part in the three-hour walk through the Ottoman heritage of Skopje, which was organized for free by the archaeologist and tourist guide Vasilka Dimitrovska. We visited four mosques built in the 15th century (Sultan Murad Mosque Gazi, Isa Beg Mosque, Ishak Beg (Aladja) mosque and Mustafa Pasha Mosque), but we also had an opportunity to get familiar with the history of Skopje’s Fortress Kale, Kursumli An, Daut-pasha Hamam, Kapan An, Suli An and the Bezisten in the Old Bazaar. We hope that those who were not present at this interesting and useful history class, can at least feel the atmosphere through our video. We talked with Dimitrovska about the free tours around Skopje and her experiences with the foreign and native tourists.