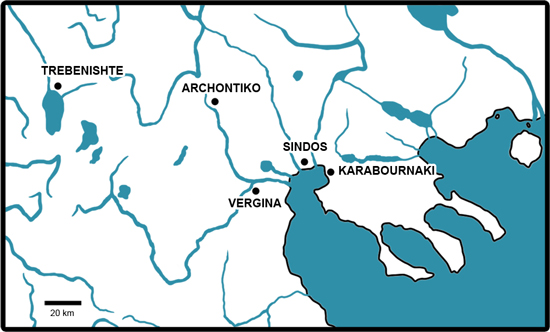 Grave goods constitute a particularly important source of information about social status in periods where written sources are unavailable. They also allow us to get an idea of the beliefs expressed in the funerary rites they evoke. In the case of ancient Macedonia, they are major indicators of the changes that took place during the sixth and fifth centuries B.C. with the apparition of higher social classes. Among these grave goods, there are a number of imported objects which testify to the trade relationships that developed in this period. However, it is generally considered that metal objects were manufactured locally. Therefore, the study of these particular objects is invaluable to the knowledge of this period. This article will deal mainly with metal objects belonging to two types: weaponry and jewellery. Weaponry was generally found in male graves which are also called “warrior graves”. Jewellery was generally found in female graves. In spite of this distinction, the quality and number of the grave goods found seem to point out the high social status of the deceased, male or female.