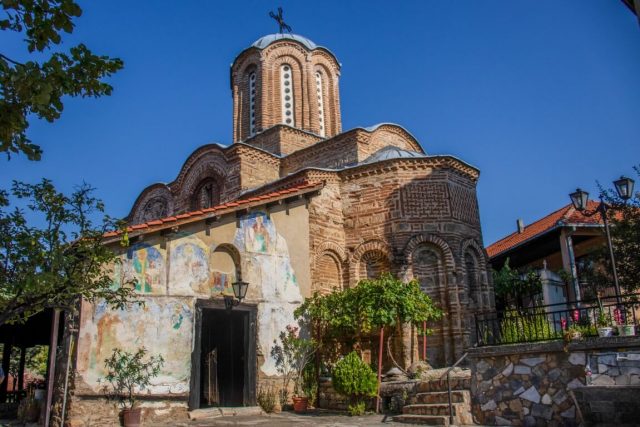 On Mount Skopska Crna Gora, a notable and noble house lead by Marena “the devout”, Radoslav and Vladislava commissioned a cross-in-square family bequest with a dome supported by pillars and (by 1331] they had it built on their estate. The metropolitan art marked chiefly by classicism that the ruling and aristocratic elites supported was also favored by these donors. They summoned the finest painters from the school of Michael Astrapas and Eutychius, whose work they admired as the supreme model. In the calotte and the drum of the dome, which were re-painted in 1874, there is a depiction of the Pantocrator surrounded by the Heavenly Liturgy and announced by the selected prophets. Further below there is a fragment from the old arrangement consisting of a rare selection of 25 busts of saints from the group of the Forty Martyrs of Sebaste. Below them on the pendentives are the images of the Holy Mandylion and the evangelists. On the walls, divided into zones, there are sequences depicting events from the Feasts and the Passion. They reflect the narrative inspiration of the authors, who elaborated the scenes by introducing rare episodes and details. Thus, owing to the skillful artistic expression, the events have acquired an erudite thematic symbolism. The concept has been consistently applied in the depiction of the Feast scenes. St. John the Forerunner speaks to the people before Christ’s baptism…. Christ talks with the selected apostles before/after the Transfiguration… Lazarus’s sisters appealing to Christ before Lazarus’s resurrection…. The bringing of the white donkey before Christ’s entry into Jerusalem…. The Mother of God returns to Jerusalem after the Ascension…. The events at Golgotha have also been enriched in narrative terms. Joseph of Arimathaea pleads for the body of Christ…. Christ drinks the “cup of wrath” before being nailed to the Cross…. The charge of the dramatic events abates with the elegiac atmosphere of the Lamentation.

The scenes from the life of the Mother of God have been given a prominent place. The Presentation, due to its patronal character, is located above the south entrance. The other events have been depicted in the prothesis and the main altar space, and have been placed between the Post-Resurrection Appearances and the usual Eucharist and Liturgical themes. 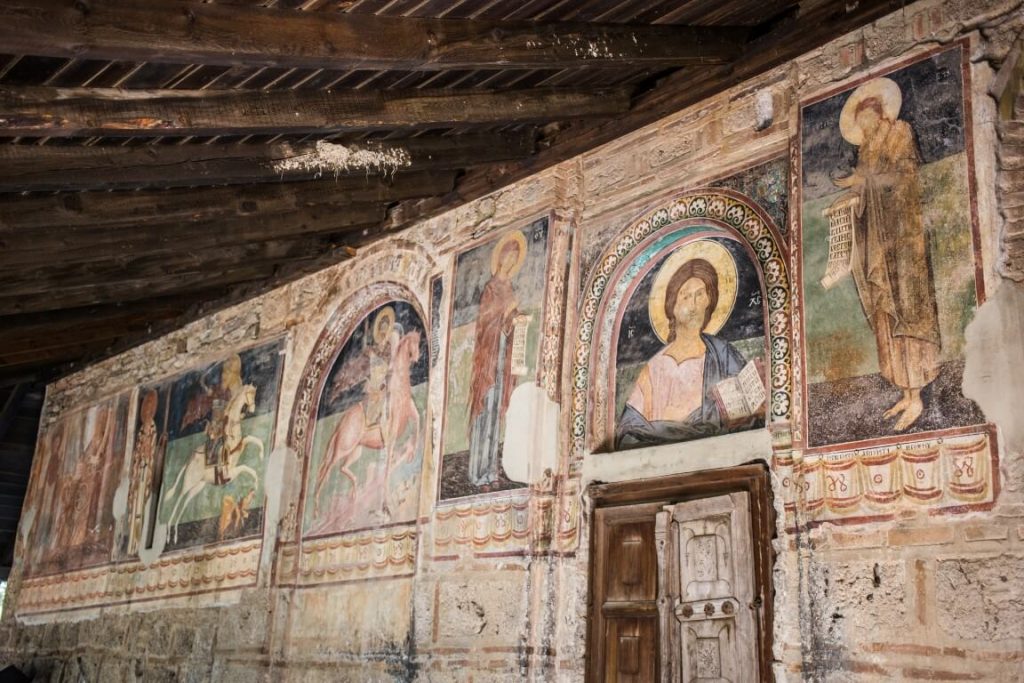 The piety that this ensemble demonstrates is further emphasized by the variety of images of saints. Among the standing ones, the depictions of monks and hermits are dominant, whereas the images of the holy healers dominate the ensemble with their busts. The narthex, consisting of a central section and lateral compartments, was erected and decorated between 1332 and 1337 by the same donors whom DukeDejan.Vladislava’s husband, joined. Having been seriously damaged in a fire, the frescoes have lost their hue forever. Still, due to the skillful drawing and its prestigious content, this visual material has been exceptionally valued. The barrel vaults of the three compartments accommodate visualizations of the last three psalms [148-150) lauding victory over death and praising the “Lord of the Universe, all Celestial Forces and Earthly Souls”. This impressively painted and complex theme emphasises the sepulchral character of the narthex. The scene showing the praising of life eternal as marked by Christ, in which laymen, noblemen and rulers partake alike, has been symbolically extended with the donor family and the ruling couple of the day, who have been placed in the first zone of the lateral compartments.

The author of the Passion cycle from the first group of painters was a dedicated supporter and superior furtherer of the 14th century metropolitan classicism that he interpreted in the style of Michael and Eutychius. The painters of the second group continued this visual interpretation in the narthex in the same spirit. In the language of science, what occurred there was academism and its merit in the Kučevište ensemble is superior.
The painting activities in the church continued in the post-Byzantine period. St. Nicholas’s Chapel, with its frescoes from 1501, has a valuable ensemble which is a testimony to the fresco-painting activities in the region of Skopje in the period of upheaval after the Ottomanisation. In the third quarter of the 16th century, another group commissioned to work in several churches in the region of Skopje painted the open portico, contributing with works of heterogeneous stylistic merit. During the same period, the south door and the hexagonal stand for the Eucharist Box were produced in intarsia with mother-of-pearl ornaments. Judging by the fragments preserved, the 16th century exonarthex, which also suffered in the fire, had a rich thematic conception consisting of the Last Judgment, the Life of St. George and the Akathist Hymn to the Mother of God. The royal doors from 1608, now in the Museum of Macedonia, with lace woodcarving characteristic of the Skopje-Prizren region, served to close the main passage through the old iconostasis all until the 19th century. In 1843, the icon-painter Damian of Kruševo, who was particularly active in this region, produced a new set of icons for the iconostasis and also painted the new doors. Soon after, in 1845, the fresco-painter Dičo started his work in the region of Skopje and – along with the other works that have not survived until our day -created the door to the prothesis upon which he painted with masterful skill the didactic scene called Archangel Michael Takes the Soul of the Wealthy Man. These important works of art are evidence that the church was a cultural and artistic center with uninterrupted continuity through the centuries.