Situated on the shores of Lake Ohrid, the town of Ohrid is one of the oldest human settlements in Europe. Built mainly between the 7th and 19th centuries, it has the oldest Slav monastery (St Pantelejmon) and more than 800 Byzantine-style icons dating from the 11th to the end of the 14th century. After those of the Tretiakov Gallery in Moscow, this is considered to be the most important collection of icons in the world 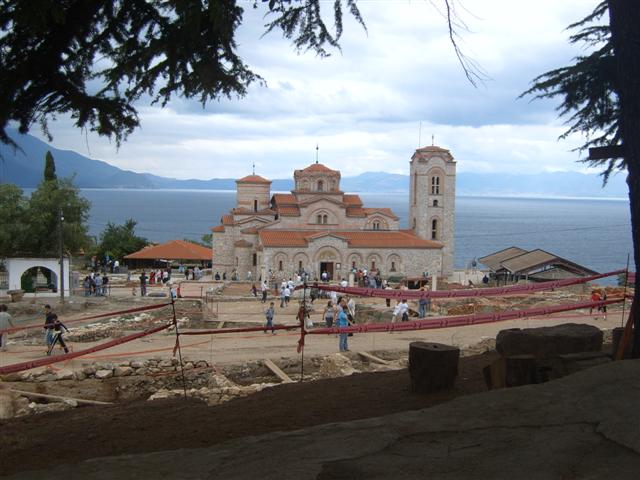 Writing, education and Slavonic culture – all spread out from Ohrid in the 7th to 19th centuries. It is a cultural centre of great importance for the history not only of this part of the Balkan Peninsula, but also for all nations of the Slavonic tongue and for world history and literature, with precious manuscripts and other rarities. This city and its historic-cultural region are located in a natural setting of exceptional beauty, while its architecture represents the best preserved and most complete ensemble of ancient urban architecture of the Slavic lands.

Ohrid is one of the most ancient human settlements in Europe, containing as it does Neolithic archaeological sites and others from the Bronze Age and the Hellenistic period. With its numerous prehistoric sites and its traces of the material culture of more than 5,000 years ago, Ohrid is indeed an archaeological treasury and the surroundings of the lake can be styled a magical land of archaeology. More than 250 archaeological sites with material remains dating from between the Neolithic period and the late Middle Ages have been excavated.

Within the very heart of the present city of Ohrid lies the antique city of Lichnid, significant and rich, as is its successor. The metamorphosis of ancient Lichnid into medieval Ohrid took from the 6th to the 9th century, creating one of the most significant medieval cities in the Balkans. The Ohrid saga reveals memories of the birth of Slavic literacy and culture in the works of St Clement and St Naum; St Clement is worshipped as a patron of the city: his three decades of work in the city (886-916) initiated the foundation of the Clement Slavic University.
In the old part of the town lying on the hillside below the double ridge of Lake Ohrid, which came into existence in a remote geological period as a result of tectonic shifts, are to be found remains of ancient temples and basilicas as well as numerous churches and chapels, built from the 9th to the 14th centuries.

The ancient Slavonic St Clement’s Monastery of St Panteleimon at Plaosnik was resanctified on 11 August 2002 when, after many years, the remains of St Clement of Ohrid, the first Slavic Bishop (893) and founder of the Macedonian Orthodox Church, were returned to this temple.

Archaeological excavations of the cathedral church of St Sophia, which is situated at the foot of the hilly part of Ohrid and close to the lake, show that it was built on the foundations of an early Christian basilica and was reconstructed at the time of Archbishop Leo (1037-56). The name of Theoranius, one of the most important painters of the 14th century, has been discovered on the archangel’s sword in the ‘Repentance of David’ fresco on the first floor in the Church of St Sophia and on painted frescoes and icons for the other churches of Ohrid. The frescoes of St Clement’s Church of the Holy Mother of God are primarily distinguished by the artists’ obvious tendency towards individual characterization of the portraits and a marked effort to move away from iconographic stereotypes.
On the pillars in the narthex of St Naum two inscriptions are to be found: made by priests, they are valuable documentary evidence of the development of the Glagolitic and Cyrillic scripts in the Ohrid region. The monumental Early Christian Episcopal Church lies in the hilly part of Ohrid. The Church of St John the Evangelist (or Theologian) at Kaneo, built and decorated towards the end of the 13th century, is of great relevance to a study of Ohrid’s medieval monuments as it is a highly successful combination of Byzantine and Armenian elements. The other monuments of Ohrid are Samuel’s Fortress, with its enceinte of medieval ramparts, and the classical theatre built about 2,000 years ago, either in the late Hellenistic period or shortly after the Roman occupation. The town’s architecture represents, with its old typical streets and houses and its particular atmosphere around old squares, the best preserved and most complete ensemble of ancient urban architecture of this part of Europe.

In 1979, the Committee decided to inscribe the Ohrid Lake on the World Heritage List under natural criteria (iii). In 1980, this property was extended to include the cultural and historical area, and cultural criteria (i)(iii)(iv) were added.