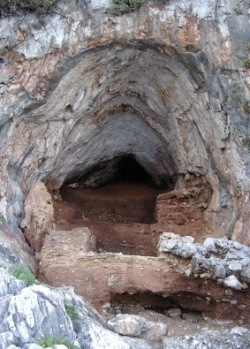 Scientists have uncovered new evidence of Neanderthal occupation at the Kalamakia cave site on the western coast of the Mani peninsula in Greece, adding to previously recovered finds at other sites in the area. The finds lend additional support to the theory that Greece and the Southern Balkans served as a dispersal corridor and refugium for Pleistocene era human populations.

The Middle Paleolithic (300,000 to 30,000 BP) cave site was excavated in 1993 – 2006 by an interdisciplinary team from the Ephoreia of Paleoanthropology and Speleology (Greek Ministry of Culture) and the Muséum national d’Histoire naturelle (Paris). The cave yielded lithic (stone tool) remains, an abundance of fauna (animal remains), and human remains of at least 8 and possibly 14 individuals consisting of 10 isolated teeth, a cranial (skull) fragment and three postcranial (other skeletal) elements, as well as several hearths. Now, the subsequent study and analysis of the cave sediments and its finds by an international team led by Katerina Harvati of the Eberhard Karis University of Túbingen, Germany, revealed that the archaeological deposits were dated to between 100,000 and 39,000 BP using radiocarbon dating techniques. Their study found that the lithic remains, which consisted of a high percentage of re-touched (additional modification after initial manufacture) flakes and scraper tools, belonged to the Mousterian technological tradition, a stone industry most commonly identified with Neanderthals. Moreover, analysis of the human remains indicated features that had affinities to Neanderthals, with evidence that some of the mammal remains found in association with the human remains were butchered, particularly fallow deer and ibex, although they had a mixed diet that included plant foods.

The site finds add to those found and studied at two other nearby sites in the Mani region, both also containing Neanderthal-related artifacts and human remains. One of the sites, Lakonis, located approximately 30 km away on the eastern cost of the same peninsula, was dated to roughly the same time period and analysis of the remains suggests that both the Kalamakia and Lakonis sites were likely frequented by the same population. The other nearby site, Apidima, also contains Neanderthal remains, but the study authors suggest that they likely predate Kalamakia, though they “could be potentially ancestral to the Kalamakia group”.*

“Together with the human specimens from Lakonis and Apidima, the Kalamakia Neanderthals add to the growing evidence of a strong Neanderthal presence in the region during the Late Pleistocene,” concludes Harvati, et al. “The recovery of an assemblage closely resembling the Uluzzian (a technocomplex recently attributed to modern humans) at the Klissoura site less than 200 km away in Northern Peloponnese underscores the significance of Greece and the Southern Balkans as both a dispersal corridor and refugium for Pleistocene human populations, and as fertile ground for potential interactions between local and incoming groups.”*

Details of the study were published in the Journal of Human Evolution
Source: popular-archaeology.com