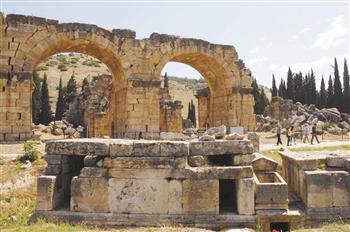 Turkish archaeologists will be working in Denizli’s ancient city of Hierapolis 12 months a year while Italians, who have been working there for 56 years, will be working two months only annually

Pamukkale University will be working with the Italian team of archaeologists that has been working in the ancient city of Hierapolis in the Aegean province of Denizli. The Italian team has been at the focus of discussions for two years because of claims that excavations were moving too slowly in the area.

While the Italian team has been carrying out excavations and restoration works in the ancient city for 56 years, the Denizli Governor’s Office applied to the Culture and Tourism Ministry, and the ministry gave approval for the archaeology department of Pamukkale University under the leadership of Professor Celal Şimşek to work on the site.

Professor Francesco D’Andria of Italy’s Lecce University joined the excavations at the Pamukkale site 56 years ago when he was a student. He and his team had been working two months a year. Denizli Mayor Abdülkadir Demir, who stated that excavations were going too slowly, asked former Culture Minister Ertuğrul Günay for permission to continue excavations throughout the year and to revive the ancient city of Hierapolis as soon as possible.

As a result of long conversations between the ministry and Denizli Governor’s Office, permission was granted for 12-month excavations at the ancient city.

Maor Demir said excavations would start at once in Hierapolis, which is home to some 2,000 graves from the Hellenistic period until the ancient age. “The world’s most unique types of graves are in Hierapolis. The asphalt pavement made in 1986 between the graves will be removed and excavations will begin on the right and left side of the road. We will revive a [piece of] significant world heritage. There will be no financial problem because the ministry and the Special Provincial Administration will provide the necessary budget.”

Demir said the Italians had the accumulations of 56 years in Hierapolis and would share them with the Turkish team during joint work. “There have been important findings and restorations for 56 years, but it is not enough for us. This is why we have planned to continue excavations throughout the year.”