Under the ramparts of the Skopje Fortress, in the Old Skopje Bazaar, concealed by walls and dug into the soil several meters below ground level, stands the church of the Holy Saviour dedicated to the Ascension of Christ. The church was given its present-day appearance in the first decades of the 19th century, at a time that was still unfavorable for building monumental Christian structures, especially when it came to the densely populated urban core of the period, the Bazaar.

The original church was built in the late 16th or early 17th centuries, which is indicated by the frescoes preserved on the south wall with the depictions of the archangels Michael and Gabriel and the frieze of half-length-figures of saints. The largest part of this church was destroyed in the fire which the Austrian General Piccolomini set to the city in 1689, when most of the urban core on the left bank of the river Vardar perished. The church is a typical pseudo-basilical structure, with a simple exterior, a gallery in the interior reached through the naos and a separate exterior entrance from the south side.

The most resplendent element in the church interior is the two-tiered iconostasis carved in wood, the work of the Mijak’ guild headed by the proto-masters Petre Filipovič from Gari and Makarius Frčkoski from Galičnik between 1819 and 1824. The inclusion of their own carved figures among the ornaments consisting of zoomorphic and vegetative motifs and Biblical scenes was customary for most of their major works; they can be seen on the south wing of the iconostasis, on the panel below the throne icons, accompanied by a carved inscription about their work. The ambo and the Episcopal throne carved in wood are also their work. This great project, financially supported by Skopje guilds, was finally finished in the 1870s, with the mounting of the iconostas icons painted by a number of Balkan icon and wall painters from this period, such as Dimitar Hristov from Samokov (1824), Dičo Krstevič from Tresonče (1854), Petre Novev Pecarov (1867) and an unknown painter from the 1850s. 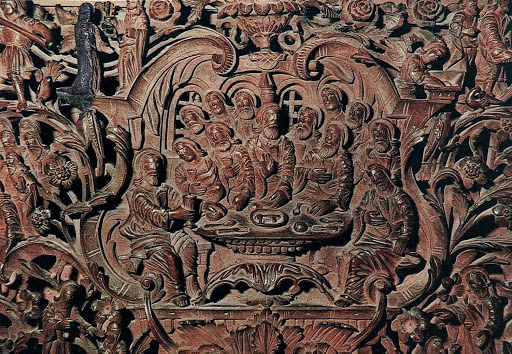 The wall decoration of the church interior is not complete. The only paintings are those painted by the famous painter Dimitar Andonov Papradiški in 1916-1917 and 1941 in the blind dome of the central nave and in the prothesis.

In 1946, the marble sarcophagus with the remains of Goce Delčev (1872-1903), the great Macedonian revolutionary, was placed in the churchyard. Exhibits related to his life and works are displayed in one of the accommodation rooms of the church; the Conservation Centre of the City of Skopje is located on the same premises as well.

If you want to book Skopje waling tour, you can contact us in the following ways: