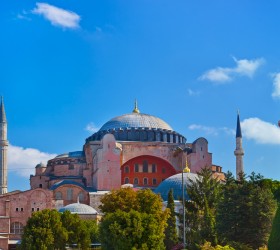 on Mar 2, 13 • by Haemus • with Comments Off on Hagia Sophia: Facts, History & Architecture


The Hagia Sophia, whose name means “holy wisdom,” is a domed monument originally built as a cathedral in Constantinople (now Istanbul, Turkey) in the sixth century A.D. It contains two...
Pin It 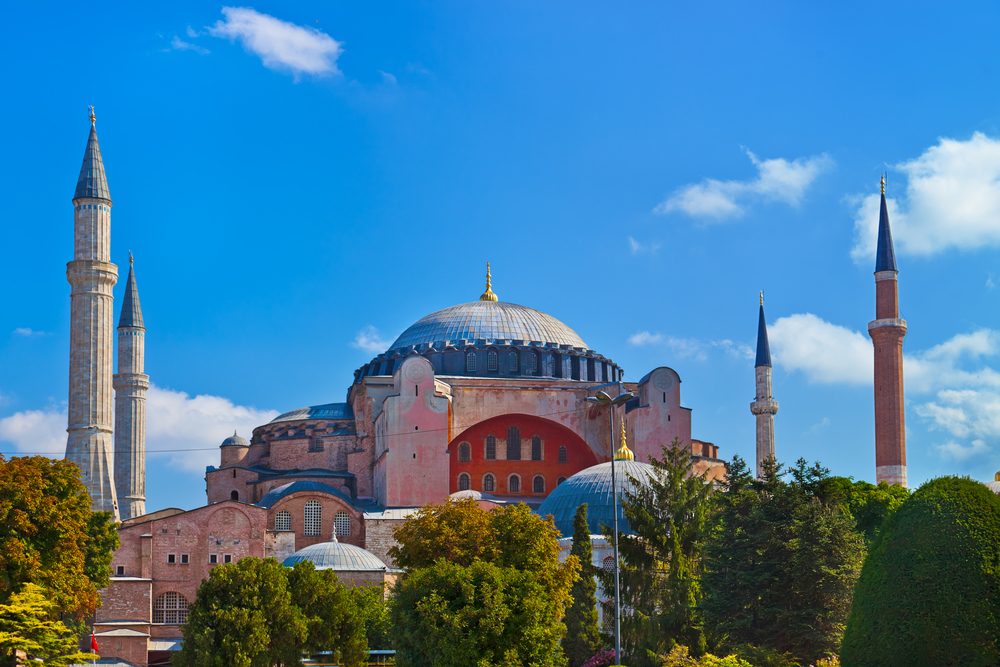 The Hagia Sophia is a domed monument built as a cathedral and is now a museum in Istanbul, Turkey. CREDIT: Tatiana Popova | Shutterstock

The Hagia Sophia, whose name means “holy wisdom,” is a domed monument originally built as a cathedral in Constantinople (now Istanbul, Turkey) in the sixth century A.D.

It contains two floors centered on a giant nave that has a great dome ceiling, along with smaller domes, towering above.

“Hagia Sophia’s dimensions are formidable for any structure not built of steel,” writes Helen Gardner and Fred Kleiner in their book “Gardner’s Art Through the Ages: A Global History.” “In plan it is about 270 feet [82 meters] long and 240 feet [73 meters] wide. The dome is 108 feet [33 meters] in diameter and its crown rises some 180 feet [55 meters] above the pavement.”

In its 1,400 year life-span it has served as a cathedral, mosque and now a museum. When it was first constructed, Constantinople was the capital of the Byzantine Empire. This state, officially Christian, originally formed the eastern half of the Roman Empire and carried on after the fall of Rome.

Born out of riots

The story of the construction of the Hagia Sophia began in A.D. 532 when the Nika Riots, a great revolt, hit Constantinople. At the time Emperor Justinian I had been ruler of the empire for five years and had become unpopular. It started in the hippodrome among two chariot racing factions called the blue and green with the riot spreading throughout the city the rioters chanting “Nika,” which means “victory,” and attempting to throw out Justinian by besieging him in his palace.

“People were resentful of the high taxes that Justinian had imposed and they wanted him out of office,” said University of London historian Caroline Goodson in a National Geographic documentary. After moving loyal troops into the city Justinian managed to put down the rebellion with brute force. In the wake of the uprising, and on the site of a torched church that had been called the Hagia Sophia, a new Hagia Sophia would be built. To the ancient writer Paul the Silentiary, who lived when the cathedral was completed, the building represented a triumph for both Justinian and Christianity.

“I say, renowned Roman Capitol, give way! My Emperor has so far overtopped that wonder as great God is superior to an idol!” (Translation by Peter Bell, from the book “Three Political Voices from the Age of Justinian,” Liverpool University Press, 2009). 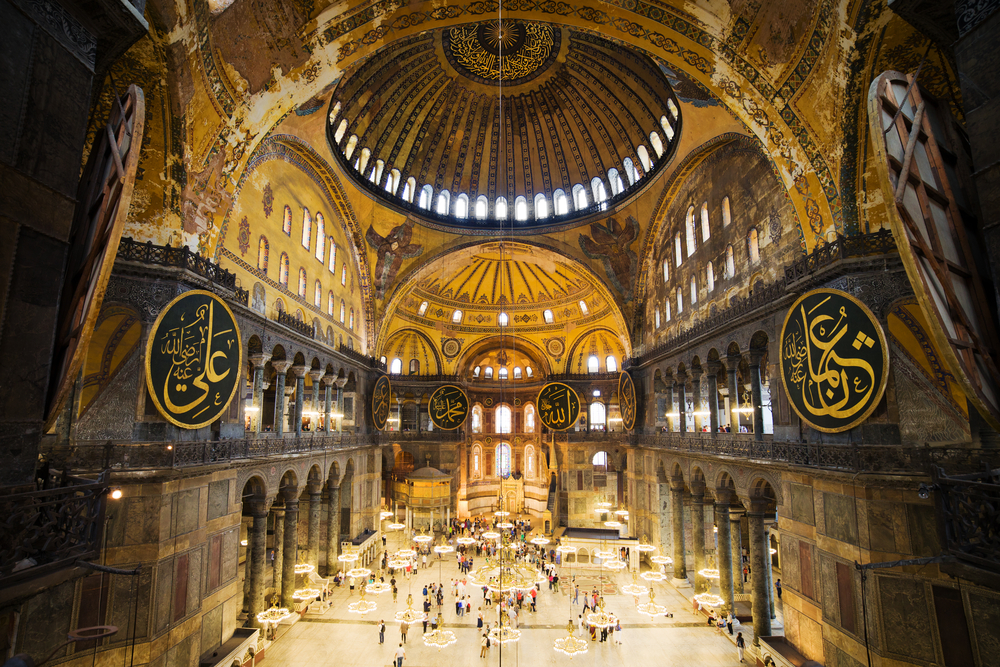 Interior of the Hagia Sophia in Istanbul, Turkey. The crown of the dome rises 180 feet (55 meters) above the floor. CREDIT: Artur Bogacki | Shutterstock

To build his cathedral, Justinian turned to two men named Anthemius and Isidore the Elder.

“Contemporary writers do not refer to Anthemius and Isidore as architects, though the term was common in the sixth century, but as mechanikoi or mechanopoioi,” writes Indiana University professor W. Eugene Kleinbauer in a section of the book “Hagia Sophia” (Scala Publishers, 2004). “These terms denote a very small number of practitioners of the arts of design, whether of buildings or of machines or other works …”

They built the Hagia Sophia in great haste, finishing it in less than six years. To put this in comparison it took nearly a century for medieval builders to construct the Notre Dame cathedral in Paris.

This short construction period appears to have led to problems. Ancient sources, such as the writer Procopios, write that the builders had problems with the dome roof, the structure almost collapsing during construction. The dome used a system of piers to channel its weight.

“The piers on top of which the structure was being built, unable to bear the mass that was pressing down on them, somehow or other suddenly started to break away and seemed to be on the point of collapsing…” writes Procopios (translation republished on Columbia University’s website).

Eventually Anthemius and Isidore did get the domed roof to stand and it was a magnificent sight indeed. “It seems not to be founded on solid masonry, but to be suspended from heaven by that golden chain and so cover the space,” wrote Procopios.

Unfortunately this roof did not stand. It collapsed about two decades later and it fell to a man named Isidore the Younger to build a new domed roof. It has lasted, with some repairs, nearly 1,400 years, down to the present day.

“The dome rests not on a drum but on pendentives, spherical triangles that arise from four huge piers that carry the weight of the cupola. The pendentives made it possible to place the dome over a square compartment,” writes researcher Victoria Hammond, who describes the structure of the surviving Hagia Sophia dome, in a chapter of the book “Visions of Heaven: The Dome in European Architecture” (Springer, 2005). 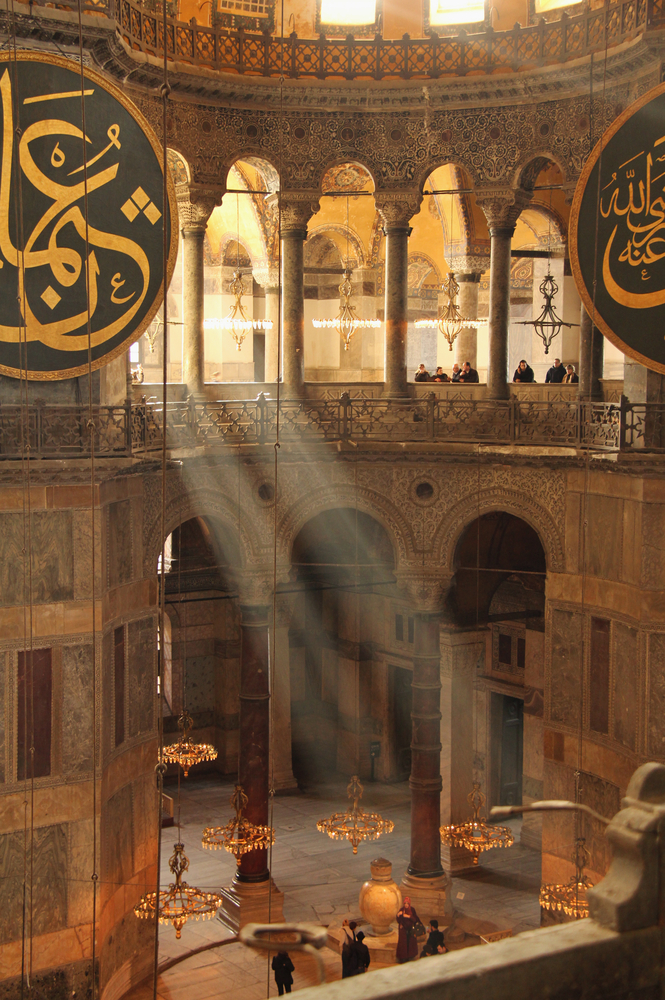 Sunlight coming in through the windows of the Hagia Sophia “seemed to dissolve the solidity of the walls and created an ambience of ineffable mystery,” wrote one author.
CREDIT: Yulia Gursoy | Shutterstock

Beneath the dome are 40 windows with sunlight coming through. “The sunlight emanating from the windows surrounding its lofty cupola, suffusing the interior and irradiating its gold mosaics, seemed to dissolve the solidity of the walls and created an ambience of ineffable mystery,” she writes. “On the completion of Hagia Sophia, Justinian is said to have remarked, ‘Solomon, I have outdone thee’.”

Modern-day visitors will note that the Hagia Sophia has two levels, the ground floor and a gallery above. The presence of the two levels may mean that people were organized according to gender and class when services were held at the cathedral.

In Byzantine churches “galleries seem to have been used as a means of segregation of genders and of social classes,” writes Vasileios Marinis in a chapter of the book “The Byzantine World” (Routledge, 2010). “In Hagia Sophia a part of the gallery was used as an imperial lodge, from which the empress and occasionally the emperor attended the services.”

This lodge wasn’t the only benefit the emperor got. Antony White writes in another chapter of the 2004 “Hagia Sophia” book that to enter the cathedral’s nave from the narthex there are nine doorways. “The central or Imperial Door was reserved for the use of the emperor and his attendants, and provides the most perfect approach to the interior of the church.”

The decorations within the Hagia Sophia at the time of construction were probably very simple, images of crosses for instances. Over time this changed to include a variety of ornate mosaics.

“There are a number of mosaics that have been added over the centuries, imperial portraits, images of the imperial family, images of Christ and different emperors, those have been added since Justinian’s day,” said Goodson in the documentary. During the eighth and ninth centuries A.D., there was a period of iconoclasm in the Byzantine Empire that resulted in some of the mosaics being destroyed.

“The controversy spanned roughly a century, during the years 726–87 and 815–43. In these decades, imperial legislation barred the production and use of figural images; simultaneously, the cross was promoted as the most acceptable decorative form for Byzantine churches,” writes Sarah Brooks, of James Madison University, in a Metropolitan Museum of Art article. 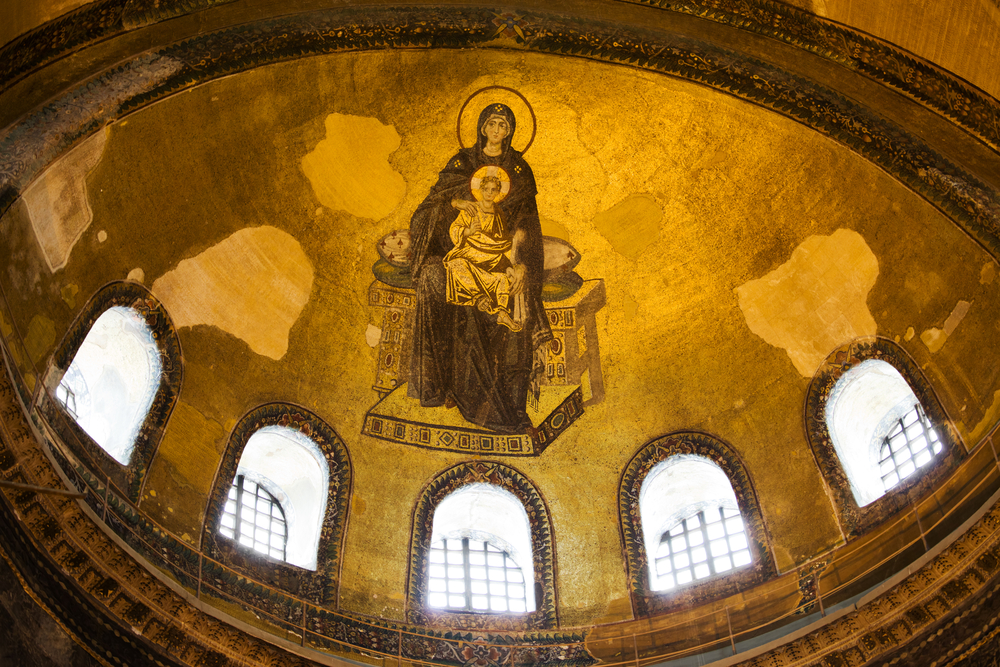 “Fear that the viewer misdirected his/her veneration toward the image rather than to the holy person represented in the image lay at the heart of this controversy.”

At the end of this period decoration of the interior of Hagia Sophia resumed, each emperor adding their own images. One of the most well-known mosaics is located on the apse of the church showing a 13-foot-tall (4 meters) Virgin Mary with Jesus as a child. Dedicated on March 29, 867, it is located 30 meters (almost 100 feet) above the church floor, notes University of Sussex professor Liz James in a 2004 article published in the journal Art History.

Another chapter in the Hagia Sophia’s life began in 1453. In that year the Byzantine Empire ended, with Constantinople falling to the armies of Mehmed II, sultan of the Ottoman Empire. The Byzantine Empire had been in decline for centuries and by 1453 the Hagia Sophia had fallen into disrepair, notes researcher Elisabeth Piltz in a 2005 British Archaeological Reports series book. Nevertheless, the Christian cathedral made a strong impression on the new Ottoman rulers and they decided to convert it into a mosque.

“What a dome, that vies in rank with the nine spheres of heaven! In this work a perfect master has displayed the whole of the architectural science,” wrote Ottoman historian Tursun Beg during the 15th century (translation from Piltz’s book). Outside the church, four minarets would eventually be added, Kleiner writes (in a 2010 edition of his book) that these “four slender pencil-shaped minarets” are more than 200 feet (60 meters) tall and are “among the tallest ever constructed.”

Changes occurred on the inside as well. Piltz writes that “after the Ottoman conquest the mosaics were hidden under yellow paint with the exception of the Theotokos [Virgin Mary with child] in the apse.” In addition “Monograms of the four caliphs were put on the pillars flanking the apse and the entrance of the nave.”

The style of the Hagia Sophia, in particular its dome, would go on to influence Ottoman architecture, most notably in the development of the Blue Mosque, built in Istanbul during the 17th century. [Related Video: Enormous Roman Mosaic Unearthed in Turkey]

In 1934, the government of Turkey secularized the Hagia Sophia and turned it into a museum. The Turkish Council of Ministers stated that due “to its historical significance, the conversion of the (Hagia Sophia) mosque, a unique architectural monument of art located in Istanbul, into a museum will please the entire Eastern world and its conversion to a museum will cause humanity to gain a new institution of knowledge.” [From Robert Nelson, “Hagia Sophia: 1850-1950: Holy Wisdom Modern Monument,” University of Chicago Press, 2004)

Research, repair and restoration work continues to this day and the Hagia Sophia is now an important site for tourism in Istanbul. It is a place that has been part of the cultural fabric of the city in both ancient and modern times.