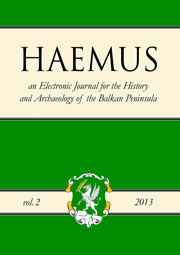 It is our privilege and great pleasure to announce the second issue of Haemus journal, entitled HAEMUS Journal Vol.2 (2013), an electronic journal for the history and archaeology of the Balkan peninsula, but also covering a wide range of related interdisciplinary topics. The aim of the journal, which is based on the principles of open educational resources and Creative Commons licenses – is to gather and present the latest developments in the historiography and archaeological research of the Balkans, both in terms of methodology and in terms of content. The content of the journal is based on purely academic research, with an editorial board consisting of scholars from highly prestigious international institutions (check here and here)

Haemus Journal is a publication of ‘HAEMUS‘ – Center for research and promotion of culture. As a publishers we hope that the serious and thorough approach, as well as the quality of the content, will cause interest in the academic community, thus helping to establish a longstanding, effective scholar co-operation.

The Journal can be downloaded via a direct link to the official website.
Link: http://haemus.mk/haemus-journal-vol-2-2013/

Damjan DONEV
Campus Argestaeus: The Chronology, Extent and Organization of Settlement in the Survey Area
89-111

Discussion:
Jovica GROZDANOVSKI
Through the Dead-ends of the Legends About Krk-kardaš and Beyond
113-133