Recently, HAEMUS with a support of the colleagues from the City Museum of Skopje made a request to the Cultural Heritage Protection Office  (Ministry of culture of the Republic of Macedonia) about using an visual image of an artifact found at the archaeological site of SCUPI as an base for our program SCUPINI ROMANI dedicated to the promotion of the ancient Roman culture and heritage. The request was approved positively, so our brand translated in Latin as the ,,Citizens of the Ancient Roman city of SCUPI” got an official logo. 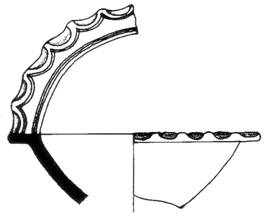 The logo actually is a drawing of a type of luxurious Ancient Roman pottery introduced in the science by J.W.Hayes (1963) as ,,Macedonian terra sigillata“. It is published in the book by Marina Onchevska-Todorovska (2004), Scupi’s Late Antique Pottery (2nd half of IV-VI century), Skopje, T15, fig. 89. It is an artifact found during the excavation of an archaeological site of SCUPI, and it is deposited in the City Museum of Skopje. For the visual design of the logo design, we would to thank to Paul Adams who has a rich portfolio in the branding of organizations, institutions and companies.

Terra sigillata as an archaeological term refers chiefly to a specific type of plain and decorated tableware made in Italy and in Gaul (France and the Rhineland) during the Roman Empire. These vessels have glossy surface slips ranging from a soft lustre to a brilliant glaze-like shine, in a characteristic color range from pale orange to bright red; they were produced in standard shapes and sizes and were manufactured on an industrial scale and widely exported.

In addition to the widespread and already recognizable Roman red pottery, another type of luxurious ceramics  has been found on many archaeological sites from the the late antique Roman period on the Balkans. Mainly it is widespread in Macedonia and hence receives its scientific epithet as Macedonian Gray Ware (Macedonian gray terra sigillata).

In an attempt to capture the reconstruction of people’s everyday life in ancient Rome, we tried to visualize part of beliefs, traditions, fashion, food and crafts practiced in antiquity through tangible and intangible heritage from this period. We’ve created SCUPINI ROMANI as an inspiration by the rich cultural heritage from the Roman period discovered in the Republic of Macedonia. The concept of SCUPINI ROMANI is variable depending on the circumstances and can be organized as an ambient setting, mobile exhibition or festival with live actors, considering that we own a lot of portable exhibits.

The main purpose of SCUPINI ROMANI is the popularization of the cultural heritage of the Roman period through education, and the main mission of the festival is the dissemination of scientific research through historical reconstruction known under the term “reenactment”. The emphasis of this reconstruction is placed on experimental archaeology, ancient technologies and their interpretation in an effort to raise public awareness of a particular scientific field among cultural heritage lovers. For that purpose, all our events within the SCUPINI ROMANI brand are very interactive and all of them are made under the slogan of UNESCO’s Open Educational Resources (OER).