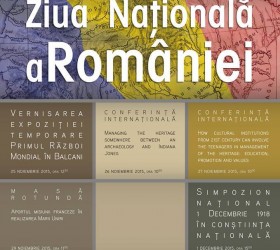 on Nov 18, 15 • by Haemus • with Comments Off on HAEMUS members will give an open public lectures at the Buzău County Museum (Romania)

Buzău County Museum, cultural institution under the Buzau County Council jurisdiction, announced a new cultural-educational and scientific manifestation on the occasion of the National Day of Romania. The events are dedicated to the students, teachers and all those passionate about the historical past, museum activities and cultural heritage protection. On this occasion during the period 25 November-1 December 2015 a series of activities with national and international impact will be held at the headquarter of the institution including the open public lectures by HAEMUS members. Please find the following schedule:

1. November 25, 2015, 12:30, exhibition hall no. 9 – mixed exhibition dedicated to the First World War in the Balkans. The exhibition is organized in collaboration with the French Embassy in Romania, 2nd Infantry Division Getica, French Cultural Institute of the Republic of Macedonia, Marshal Alexandru Averescu Foundation, French Cultural Centre of Buzau and HAEMUS – Center for scientific research and promotion of the culture (Republic of Macedonia). Along with the reception by the French Embassy representatives, a mini-recital performed by students Hair Valley Secondary School will take place at this event. The museum will be involved with a new thematic exhibition which will include photos from the Balkan front of the First World War, and objects of the same period. 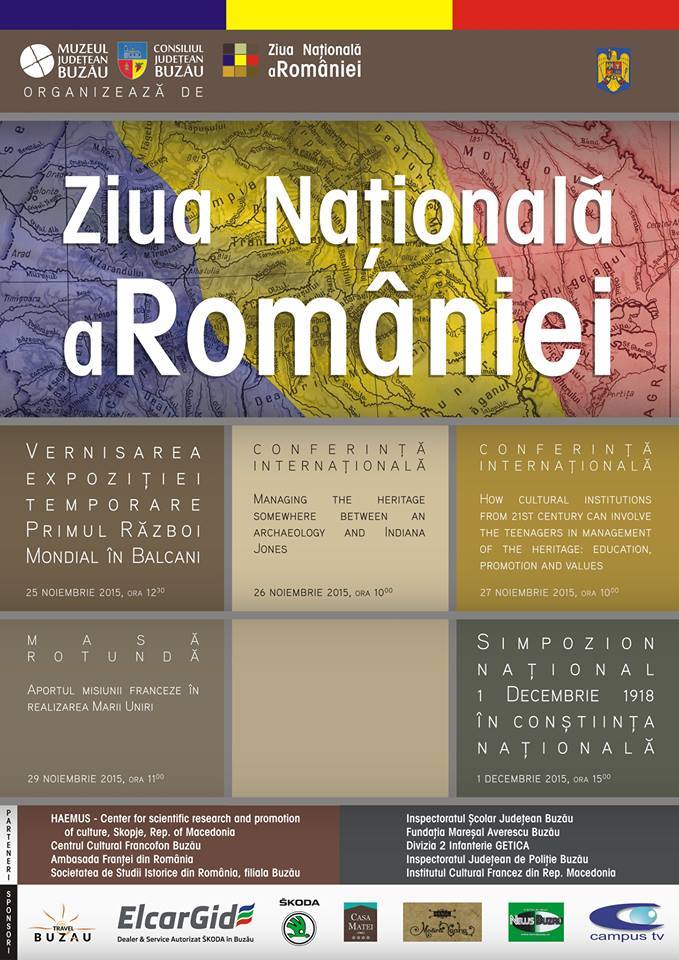 2. November 26, 2015, 10:00, amphitheatre of the Buzău County Museum – an International Conference “Managing the heritage somewhere between an archaeology and Indiana Jones?”, organized in collaboration with HAEMUS – Center for scientific research and promotion of the culture, Republic of Macedonia. Two representatives of HAEMUS, as well as the representative from the Buzău County Museum will give a lecture. The topics are address both, to young people and teachers, and intend to present the ways of managing the archaeological heritage in particular and cultural heritage in general.

3. November 27, 2015 at 10.00, amphitheatre of the Buzău County Museum – an International Conference on ‘’How cultural institutions from 21st century can involve the teenagers in management of the heritage: education, promotion and values”, organized in collaboration with HAEMUS – Center for scientific research and promotion of the culture, Republic of Macedonia. The presentation will be held by the two representatives of HAEMUS and a representative of the Buzău County Museum. The topic is addressed especially to young people, aiming to present the main social threats that cultural institutions must face in the 21st century.

The events are part of the institutional cross-border partnership between the Buzau County Museum (Buzau, Romania), signed in October 2015 in Vidin, Bulgaria.