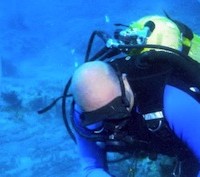 on Dec 18, 12 • by Haemus • with Comments Off on Greek Antiquities Found On Mentor Shipwreck


The underwater shipwreck excavation of the wreck of the ship Mentor, that sank off the island of Kythera in 1802 while carrying goods plundered from the Parthenon by British diplomat Lord Elgin...
Pin It

The underwater shipwreck excavation of the wreck of the ship Mentor, that sank off the island of Kythera in 1802 while carrying goods plundered from the Parthenon by British diplomat Lord Elgin has proved to be a treasure trove of personal items from the passengers and crew.

A greater number of coins were also found, at least two ancient silver coins which were antiquities acquired by Elgin, passengers or the crew,along with two gold coins, used as currency at the time, from the late 1700’s. Other coins were also recovered but require conservation before they can be identified. Some of these may also be ancient.

Finding three ancient coins on the wreck last year created international news, prompting a question about what other antiquities Elgin was transporting, in addition to crates of Parthenon marbles and sculptures. There may be even more questions from this year’s finds, after conservation of currently unidentified coins is completed.

Another pistol was recovered, a fob (pocket) watch, personal seal with a cannon on it and gold chain, a pipe, ring, part of navigation instruments, bottles, musket balls, cannon balls, crockery and ceramics possibly from the galley (kitchen) area. The Mentor was a small Brig, carrying 16 crates of Parthenon sculptures and a marble throne, en-route to Malta and then the United Kingdom.

Diaries from the time reveal that the Parthenon sculptures and marble throne were recovered by sponge divers from Simi and Kalymnos in 1802-1804 but it’s unknown what else remains buried on the bottom of the sea, near Avlemonas.