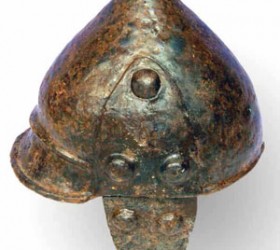 on Dec 27, 14 • by Haemus • with Comments Off on Exhibition and book – Lychnidos in the shadow of Isis with Celtic warriors and golden face of a Macedonian king


An international exhibition “The golden faces of Macedonian kings – Macedonians and Celts from the Ohrid...
Pin It

An international exhibition “The golden faces of Macedonian kings – Macedonians and Celts from the Ohrid region”, was result of an EU-funded project “Clash of Cultures”. It was coordinated by the University of Primorska in cooperation with the Archaeological Museum of Macedonia, the Kelten Romer Museum in Manching (Germany), the Museum of Losinj in Croatia, the Institute for Protection of Cultural Monuments in Ohrid and City Museum of Negotiono (Macedonia)

Most of the artifacts from this exhibition today are displayed in the Archaeological Museum of Macedonia in Skopje and in the so called ‘Golden room’ within the City Museum of Ohrid. Тhe exhibition was followed by catalog in full color and few articles by archaeologist from Macedonia and Slovenia.