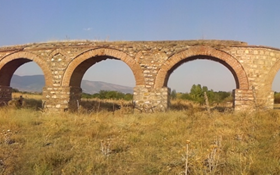 Climate Change and Cultural Heritage in the Republic of Macedonia

on Oct 14, 14 • by Haemus • with Comments Off on Climate Change and Cultural Heritage in the Republic of Macedonia


Although quite often omitted from impact assessments, vulnerability studies, or policy priorities with regard to climate change, cultural heritage will also be affected by...
Pin It

Although quite often omitted from impact assessments, vulnerability studies, or policy priorities with regard to climate change, cultural heritage will also be affected by the changing climatic patterns. Whereas other ecosystem elements may have regenerative potential, the impacts of climate change on cultural heritage are expected to determine, if no preventive action is taken, irreversible alterations or even disappearance. Dramatic temperature changes (diurnal or seasonal) or increases in wet/dry and freeze/thaw cycles will trigger not only the deterioration of facades and wall paintings, or internal damage of brick, stone and ceramics but can in worst cases lead to fractures in constructive elements which put the stability of monuments at risk.

Under the Third National Communication, a vulnerability assessment and recommendations for cultural heritage protection from climate changes was done for the first time. You can download full Report here.

Three sites were selected for assessment: Skopje Aqueduct, Stobi and Plaosnik in Ohrid.

The Skopje Aqueduct is located on the slopes of a hill outside Skopje in medium high terrain and a small river passed downhill through the site.

Climate change is expected to primarily affect the statics of the aqueduct and even to have a pronounced impact on the structural integrity of the monument. The monument will be damaged in its entirety due to highly significant effects associated with climate change such as an increased number of freeze/thaw days, increased heavy precipitation and flooding, as well as fluctuations in the water table.

The archaeological site of Stobi however is located on lower hill slopes which reach into the lowest sections of a valley close to the confluence of two larger rivers, Vardar and Crna, the regular flooding of which affected the site since ancient times.

The high number of days with a temperature range above and below 0°C (freeze-thaw weather), increasing heavy rainfall and unpredictable flood events will affect both the structural stability of the archaeological remains as well as the building materials. The gray tertiary sandstone, as the most important material of the Roman buildings, is most vulnerable to climate caused damage processes including surface recession and stone deterioration.

The archaeological site of Plaosnik in Ohrid is located on the upper plateau of the steep lake cliffs and remains uninfluenced by natural water streams. However, the plateau location is very exposed to extreme weather events and illustrates past damages of wind and rain erosion.