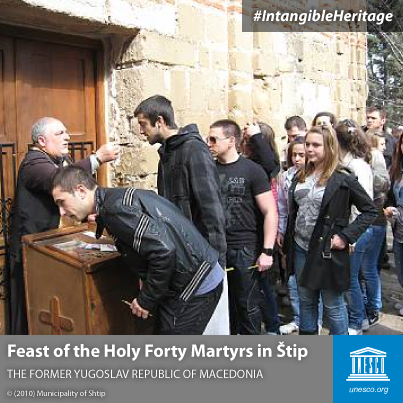 The UNESCO National Commission marked Thursday the inclusion of Macedonia’s first ritual, called Cetrse, in the UNESCO Representative List of Intangible Cultural Heritage of Humanity. The application was filed in 2011 while the announcement was made during a conference held in Baku on Dec. 2-7.

Cetrse is a unique and centuries-old custom marked annually on the Feast of the Holy Forty Martyrs (March 22), honoring the venerable martyrs of Sebaste and marking the first day of spring. Participants gather on the streets and squares of Stip and then first go to the church on the hillside, paying tribute to the Holy Forty Martyrs. After that the ritual hiking up the Isar hill begins during which the participants perform rituals mainly concerning the number 40. It is customary that while going uphill, the participants greet 40 acquaintances and gather up 40 pebbles. They also take 40 flowers or 40 twigs from the almond trees that grow around. When they arrive on the top of the hill the 39 pebbles are thrown off into the Bregalnica river, thinking of wishes one would like to see come true. The 40th pebble is not thrown off, but it is kept and put under one’s pillow before going to bed that night.

Secretary General of the UNESCO National Commission Lidija Topuzovska said that Macedonia had a myriad of intangible cultural traditions.

The certificate on the inclusion of Cetrse, signed by the UNESCO Director General Irina Bokova, was presented to the mayor of Stip, Ilco Zahariev.

“Stip is a city with history and fantastic culture, a city of Christianity, youth and beauty, the birth place of prominent individuals. It is no coincidence that the first Macedonian cultural custom in the UNESCO list hails from Stip,” he concluded.

The UNESCO Convention for the Safeguarding of Intangible Cultural Heritage was adopted in 2003 and Macedonia is one of the first 30 countries that ratified the document. Currently it includes 157 member countries.